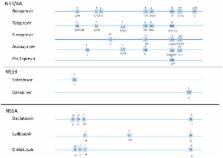 Sustained virological response (SVR) rates have increased dramatically following the approval of direct acting antiviral (DAA) therapies. While individual DAAs have a low barrier to resistance, most patients can be successfully treated using DAA combination therapy. However, DAAs are vulnerable to drug resistance, and resistance-associated variants (RAVs) may occur naturally prior to DAA therapy or may emerge following drug exposure. While most RAVs are quickly lost in the absence of DAAs, compensatory mutations may reinforce fitness. However, the presence of RAVs does not necessarily preclude successful treatment. Although developments in hepatitis C virus (HCV) therapy in Asia have largely paralleled those in the United States, Japan’s July 2014 approval of asunaprevir plus daclatasvir combination therapy as the first all-oral interferon-free therapy was not repeated in the United States. Instead, two different combination therapies were approved: sofosbuvir/ledipasvir and paritaprevir/ritonavir/ombitasvir/dasabuvir. This divergence in treatment approaches may lead to differences in resistance challenges faced by Japan and the US. However, the recent approval of sofosbuvir plus ledipasvir in Japan and the recent submissions of petitions for approval of paritaprevir/ritonavir plus ombitasvir suggest a trend towards a new consensus on emerging DAA regimens.

Khayriyyah Mohd Hanafiah,  Justina Groeger,  Abraham Flaxman … (2013)
In efforts to inform public health decision makers, the Global Burden of Diseases, Injuries, and Risk Factors 2010 (GBD2010) Study aims to estimate the burden of disease using available parameters. This study was conducted to collect and analyze available prevalence data to be used for estimating the hepatitis C virus (HCV) burden of disease. In this systematic review, antibody to HCV (anti-HCV) seroprevalence data from 232 articles were pooled to estimate age-specific seroprevalence curves in 1990 and 2005, and to produce age-standardized prevalence estimates for each of 21 GBD regions using a model-based meta-analysis. This review finds that globally the prevalence and number of people with anti-HCV has increased from 2.3% (95% uncertainty interval [UI]: 2.1%-2.5%) to 2.8% (95% UI: 2.6%-3.1%) and >122 million to >185 million between 1990 and 2005. Central and East Asia and North Africa/Middle East are estimated to have high prevalence (>3.5%); South and Southeast Asia, sub-Saharan Africa, Andean, Central, and Southern Latin America, Caribbean, Oceania, Australasia, and Central, Eastern, and Western Europe have moderate prevalence (1.5%-3.5%); whereas Asia Pacific, Tropical Latin America, and North America have low prevalence (<1.5%). The high prevalence of global HCV infection necessitates renewed efforts in primary prevention, including vaccine development, as well as new approaches to secondary and tertiary prevention to reduce the burden of chronic liver disease and to improve survival for those who already have evidence of liver disease. Copyright © 2012 American Association for the Study of Liver Diseases.

The global burden of hepatitis C.

Daniel Lavanchy (2009)
Hepatitis C is of concern both to industrialized and developing countries. Preliminary unpublished estimates of the global burden of disease (GBD) attributable to HCV-related chronic liver disease seem to be substantial. Therefore, the reduction of global mortality and morbidity related to chronic hepatitis C should be a concern to public health authorities, and primary, secondary and tertiary prevention activities should be implemented and monitored in each country, with precise targets set to be reached. In order to decide on national health policies, there is a need to estimate the burden of disease, globally, regionally and nationally. To evaluate the GBD, three components have to be assessed: 1) The global, regional and national burden of morbidity and mortality associated with HCV infection, based on prevalence, incidence, transmission and economics; 2) The natural history of HCV infection, including 'healthy individuals'; and 3) The areas for which more research is needed. A working group was created to assist the World Health organization (WHO) in estimating the GBD associated with HCV infection.

Sofosbuvir for hepatitis C genotype 2 or 3 in patients without treatment options.