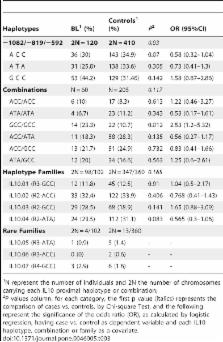 Epstein-Barr virus (EBV) is an important environmental factor associated to the development of Burkitt lymphoma (BL) in endemic and intermediate risk regions. However, little is known about the contribution of genetic constitution to the development and clinical response of the disease. The aim of this work was to investigate the role of EBV and Interleukin 10 ( IL10) single nucleotide polymorphisms (−1082A/G, −819C/T, −592C/A) and microsatellites (IL10.R and IL10.G) in susceptibility and clinical outcome in pediatric BL patients, in a region with intermediate EBV association frequency. The frequencies of IL10 promoter Single nucleotide polymorphisms −1082A/G, −819C/T, −592C/A, and IL10.R and IL10.G microsatellites were compared in 62 pediatric patients and 216 healthy donors. IL10 −1082GG and GCC/GCC genotypes were more frequent in patients than in controls, and associated to a higher risk of BL development (GG genotype OR 2.62, 95% CI, 1.25–5.51; P = 0.008; Pc = 0.024). EBV was detected in tumor samples by EBER-ISH in 54.1% of cases. EBV+ patients exhibited a better event free survival (EFS) ( P = 0.019) than EBV− patients. Carriers of IL10 R3-GCC had worse EFS ( P = 0.028). Our results suggest a risk effect and an independent prognostic value of IL10 polymorphisms and EBV in childhood BL patients.

An investigation of polymorphism in the interleukin-10 gene promoter.

Benjamin Lazarus,  D Sankaran,  Adrian Williams … (1997)
Interleukin-10 (IL-10) has been described as an anti-inflammatory cytokine and B-cell proliferation factor and has been implicated in autoimmunity, tumorigenesis and transplantation tolerance. We have identified three single base pair substitutions in the IL-10 gene promoter and have investigated whether this polymorphism correlates with IL-10 protein production in vitro.

Interleukin 10 is a potent growth and differentiation factor for activated human B lymphocytes.

Eli Moore,  Hao H Hsu,  J Banchereau … (1992)
Interleukin 10 (IL-10), originally identified as a TH2 helper T-cell product able to inhibit cytokine production by TH1 cells, is highly homologous to BCRF1 (viral IL-10), an open reading frame in the Epstein-Barr virus genome. Here, we show that human and viral IL-10 stimulate DNA replication of B lymphocytes activated either via their antigen receptor or via their CD40 antigen. IL-4 and IL-10 display additive effects and induce a strong increase in the number of viable cells. Moreover, IL-10 induces activated B cells to secrete large amounts of IgG, IgA, and IgM, and the combination of IL-10 and IL-4 results in the secretion of the four immunoglobulin isotypes. Thus, IL-10 may play an important role in the amplification of humoral responses.

Color and genomic ancestry in Brazilians.

F. Parra,  R. C. Amado,  J R Lambertucci … (2003)
This work was undertaken to ascertain to what degree the physical appearance of a Brazilian individual was predictive of genomic African ancestry. Using a panel of 10 population-specific alleles, we assigned to each person an African ancestry index (AAI). The procedure was able to tell apart, with no overlaps, 20 males from northern Portugal from 20 males from São Tomé Island on the west coast of Africa. We also tested 10 Brazilian Amerindians and observed that their AAI values fell in the same range as the Europeans. Finally, we studied two different Brazilian population samples. The first consisted of 173 individuals from a rural Southeastern community, clinically classified according to their Color (white, black, or intermediate) with a multivariate evaluation based on skin pigmentation in the medial part of the arm, hair color and texture, and the shape of the nose and lips. In contrast to the clear-cut results with the African and European samples, our results showed large variances and extensive overlaps among the three Color categories. We next embarked on a study of 200 unrelated Brazilian white males who originated from cosmopolitan centers of the four major geographic regions of the country. The results showed AAI values intermediate between Europeans and Africans, even in southern Brazil, a region predominantly peopled by European immigrants. Our data suggest that in Brazil, at an individual level, color, as determined by physical evaluation, is a poor predictor of genomic African ancestry, estimated by molecular markers.

This work was supported by the Swissbridge Foundation (Switzerland), Fundação de Amparo à Pesquisa do Estado do Rio de Janeiro (FAPERJ, PensaRio) and Instituto Nacional de Ciência e Tecnologia (INCT) para Controle do Câncer (Grants Conselho Nacional de Desenvolvimento Científico e Tecnológico, CNPq 573806/2008-0 and FAPERJ E26/170.026/2008) (Brazil). Sponsors had no involvement in the study design, in the collection, analysis and interpretation of data, in the writing of the manuscript, or in the decision to submit the manuscript for publication.