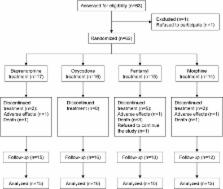 Aim of the study

To compare analgesia and adverse effects during oral morphine and oxycodone and transdermal fentanyl and buprenorphine administration in cancer patients with pain.

Cancer patients treated at home and in outpatient clinics with severe pain (numerical rating scale score 6–10) fail to respond to non-opioids and/or weak opioids. All patients were randomized to either morphine, oxycodone, fentanyl or buprenorphine and divided into subgroups with predominant neuropathic and nociceptive pain component. Doses of opioids were titrated to satisfactory analgesia and acceptable adverse effects intensity. Patients were assessed at baseline and followed for 28 days. In all patient groups, immediate-release oral morphine was the rescue analgesic and lactulose 10 mL twice daily was the prophylaxis of constipation; no antiemetics were used as prophylaxis.

A total of 62 patients participated and 53 patients completed the study. Good analgesia was obtained for all 4 opioids, for both nociceptive and neuropathic pain. The use of co-analgesics was greater in patients with neuropathic pain. Morphine treatment was associated with less negative impact of pain on ability to walk, work and activity (trend) according to Brief Pain Inventory-Short Form scores and less consumption of rescue morphine. The most common adverse effects included nausea and drowsiness, which increased at the beginning of the treatment and gradually decreased over the days to come. Appetite, well-being, anxiety, depression, and fatigue improved. There was no constipation (the Bowel Function Index scores were within normal range) during the treatment with all opioids. No changes were seen for constipation, vomiting and dyspnea.

All opioids were effective and well-tolerated. Morphine was the most effective in the improvement in some of the Brief Pain Inventory-Short Form items regarding negative impact of pain on patients’ daily activities. Prophylaxis of constipation was effective; antiemetics may be considered for nausea prevention.

Use of opioid analgesics in the treatment of cancer pain: evidence-based recommendations from the EAPC.

Augusto Caraceni,  Geoffrey Hanks,  Stein Kaasa … (2012)
Here we provide the updated version of the guidelines of the European Association for Palliative Care (EAPC) on the use of opioids for the treatment of cancer pain. The update was undertaken by the European Palliative Care Research Collaborative. Previous EAPC guidelines were reviewed and compared with other currently available guidelines, and consensus recommendations were created by formal international expert panel. The content of the guidelines was defined according to several topics, each of which was assigned to collaborators who developed systematic literature reviews with a common methodology. The recommendations were developed by a writing committee that combined the evidence derived from the systematic reviews with the panellists' evaluations in a co-authored process, and were endorsed by the EAPC Board of Directors. The guidelines are presented as a list of 16 evidence-based recommendations developed according to the Grading of Recommendations Assessment, Development and Evaluation system. Copyright © 2012 Elsevier Ltd. All rights reserved.

The Karnofsky Performance Status Scale. An examination of its reliability and validity in a research setting.

Christine Laliberté,  J. D. Morris,  V Mor … (1984)
The Karnofsky Performance Status Scale (KPS) is widely used to quantify the functional status of cancer patients. However, limited data exist documenting its reliability and validity. The KPS is used in the National Hospice Study (NHS) as both a study eligibility criterion and an outcome measure. As part of intensive training, interviewers were instructed in and tested on guidelines for determining the KPS levels of patients. After 4 months of field experience, interviewers were again tested based on narrative patient descriptions. The interrator reliability of 47 NHS interviewers was found to be 0.97. The construct validity of the KPS was analyzed, and the KPS was found to be strongly related (P less than 0.001) to two other independent measures of patient functioning. Finally, the relationship of the KPS to longevity (r = 0.30) in a population of terminal cancer patients documents its predictive validity. These findings suggest the utility of the KPS as a valuable research tool when employed by trained observers.