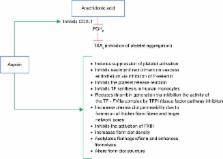 The antithrombotic action of aspirin has long been recognized. Aspirin inhibits platelet function through irreversible inhibition of cyclooxygenase (COX) activity. Until recently, aspirin has been mainly used for primary and secondary prevention of arterial antithrombotic events. The aim of this study was to review the literature with regard to the various mechanisms of the newly discovered effects of aspirin in the prevention of the initiation and development of venous thrombosis. For this purpose, we used relevant data from the latest numerous scientific studies, including review articles, original research articles, double-blinded randomized controlled trials, a prospective combined analysis, a meta-analysis of randomized trials, evidence-based clinical practice guidelines, and multicenter studies. Aspirin is used in the prevention of venous thromboembolism (VTE), especially the prevention of recurrent VTE in patients with unprovoked VTE who were treated with vitamin K antagonists (VKAs) or with non-vitamin K antagonist oral anticoagulants (NOACs). Numerous studies have shown that aspirin reduces the rate of recurrent VTE in patients, following cessation of VKAs or NOACs. Furthermore, low doses of aspirin are suitable for long-term therapy in patients recovering from orthopedic or other surgeries. Aspirin is indicated for the primary and secondary prevention as well as the treatment of cardiovascular diseases, including acute coronary syndrome, myocardial infarction, peripheral artery disease, acute ischemic stroke, and transient ischemic attack (especially in atrial fibrillation or mechanical heart valves). Aspirin can prevent or treat recurrent unprovoked VTEs as well as VTEs occurring after various surgeries or in patients with malignant disease. Recent trials have suggested that the long-term use of low-dose aspirin is effective not only in the prevention and treatment of arterial thrombosis but also in the prevention and treatment of VTE. Compared with VKAs and NOACs, aspirin has a reduced risk of bleeding.

Trends in the incidence of deep vein thrombosis and pulmonary embolism: a 25-year population-based study.

Tobias Fuchs,  Alexander Brill,  Denisa D. Wagner (2012)
Deep vein thrombosis (DVT) is a major health problem that requires improved prophylaxis and treatment. Inflammatory conditions such as infection, cancer, and autoimmune diseases are risk factors for DVT. We and others have recently shown that extracellular DNA fibers produced in inflammation and known as neutrophil extracellular traps (NETs) contribute to experimental DVT. NETs stimulate thrombus formation and coagulation and are abundant in thrombi in animal models of DVT. It appears that, in addition to fibrin and von Willebrand factor, NETs represent a third thrombus scaffold. Here, we review how NETs stimulate thrombosis and discuss known and potential interactions of NETs with endothelium, platelets, red blood cells, and coagulation factors and how NETs could influence thrombolysis. We propose that drugs that inhibit NET formation or facilitate NET degradation may prevent or treat DVT.

Per Olav Vandvik,  A Lincoff,  Joel M. Gore … (2012)
This guideline focuses on long-term administration of antithrombotic drugs designed for primary and secondary prevention of cardiovascular disease, including two new antiplatelet therapies. The methods of this guideline follow those described in Methodology for the Development of Antithrombotic Therapy and Prevention of Thrombosis Guidelines: Antithrombotic Therapy and Prevention of Thrombosis, 9th ed: American College of Chest Physicians Evidence-Based Clinical Practice Guidelines in this supplement. We present 23 recommendations for pertinent clinical questions. For primary prevention of cardiovascular disease, we suggest low-dose aspirin (75-100 mg/d) in patients aged > 50 years over no aspirin therapy (Grade 2B). For patients with established coronary artery disease, defined as patients 1-year post-acute coronary syndrome, with prior revascularization, coronary stenoses > 50% by coronary angiogram, and/or evidence for cardiac ischemia on diagnostic testing, we recommend long-term low-dose aspirin or clopidogrel (75 mg/d) (Grade 1A). For patients with acute coronary syndromes who undergo percutaneous coronary intervention (PCI) with stent placement, we recommend for the first year dual antiplatelet therapy with low-dose aspirin in combination with ticagrelor 90 mg bid, clopidogrel 75 mg/d, or prasugrel 10 mg/d over single antiplatelet therapy (Grade 1B). For patients undergoing elective PCI with stent placement, we recommend aspirin (75-325 mg/d) and clopidogrel for a minimum duration of 1 month (bare-metal stents) or 3 to 6 months (drug-eluting stents) (Grade 1A). We suggest continuing low-dose aspirin plus clopidogrel for 12 months for all stents (Grade 2C). Thereafter, we recommend single antiplatelet therapy over continuation of dual antiplatelet therapy (Grade 1B). Recommendations continue to favor single antiplatelet therapy for patients with established coronary artery disease. For patients with acute coronary syndromes or undergoing elective PCI with stent placement, dual antiplatelet therapy for up to 1 year is warranted.