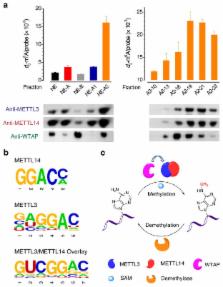 N 6-methyladenosine (m 6A) is the most prevalent and reversible internal modification in mammalian messenger and non-coding RNAs. We report here that human METTL14 catalyzes m 6A RNA methylation. Together with METTL3, the only previously known m 6A methyltransferase, these two proteins form a stable heterodimer core complex of METTL3-14 that functions in cellular m 6A deposition on mammalian nuclear RNAs. WTAP, a mammalian splicing factor, can interact with this complex and affect this methylation.

MTA is an Arabidopsis messenger RNA adenosine methylase and interacts with a homolog of a sex-specific splicing factor.

Silin Zhong, Hongying Li, Zsuzsanna Bodi … (2008)
N6-Methyladenosine is a ubiquitous modification identified in the mRNA of numerous eukaryotes, where it is present within both coding and noncoding regions. However, this base modification does not alter the coding capacity, and its biological significance remains unclear. We show that Arabidopsis thaliana mRNA contains N6-methyladenosine at levels similar to those previously reported for animal cells. We further show that inactivation of the Arabidopsis ortholog of the yeast and human mRNA adenosine methylase (MTA) results in failure of the developing embryo to progress past the globular stage. We also demonstrate that the arrested seeds are deficient in mRNAs containing N6-methyladenosine. Expression of MTA is strongly associated with dividing tissues, particularly reproductive organs, shoot meristems, and emerging lateral roots. Finally, we show that MTA interacts in vitro and in vivo with At FIP37, a homolog of the Drosophila protein FEMALE LETHAL2D and of human WILMS' TUMOUR1-ASSOCIATING PROTEIN. The results reported here provide direct evidence for an essential function for N6-methyladenosine in a multicellular eukaryote, and the interaction with At FIP37 suggests possible RNA processing events that might be regulated or altered by this base modification.

Guifang Jia, Ye Fu, Tong-Chuan He (2013)
N(6)-methyladenosine (m(6)A) is a ubiquitous modification in mRNA and other RNAs across most eukaryotes. For many years, however, the exact functions of m(6)A were not clearly understood. The discovery that the fat mass and obesity-associated protein (FTO) is an m(6)A demethylase indicates that this modification is reversible and dynamically regulated, suggesting that it has regulatory roles. In addition, it has been shown that m(6)A affects cell fate decisions in yeast and plant development. Recent affinity-based m(6)A profiling in mouse and human cells further showed that this modification is a widespread mark in coding and noncoding RNA (ncRNA) transcripts and is likely dynamically regulated throughout developmental processes. Therefore, reversible RNA methylation, analogous to reversible DNA and histone modifications, may affect gene expression and cell fate decisions by modulating multiple RNA-related cellular pathways, which potentially provides rapid responses to various cellular and environmental signals, including energy and nutrient availability in mammals. Copyright © 2012 Elsevier Ltd. All rights reserved.

Induction of sporulation in Saccharomyces cerevisiae leads to the formation of N6-methyladenosine in mRNA: a potential mechanism for the activity of the IME4 gene.

Mary J. Clancy, Mary Shambaugh, Candace Timpte … (2002)
N6-methyladenosine (m6A) is present at internal sites in mRNA isolated from all higher eukaryotes, but has not previously been detected in the mRNA of the yeast Saccharomyces cerevisiae. This nucleoside modification occurs only in a sequence- specific context that appears to be conserved across diverse species. The function of this modification is not fully established, but there is some indirect evidence that m6A may play a role in the efficiency of mRNA splicing, transport or translation. The S.cerevisiae gene IME4, which is important for induction of sporulation, is very similar to the human gene MT-A70, which has been shown to be a critical subunit of the human mRNA [N6-adenosine]-methyltransferase. This observation led to the hypothesis that yeast sporulation may be dependent upon methylation of yeast mRNA, mediated by Ime4p. In this study we show that induction of sporulation leads to the appearance of low levels of m6A in yeast mRNA and that this modification requires IME4. Moreover, single amino acid substitutions in the putative catalytic residues of Ime4p lead to severe sporulation defects in a strain whose sporulation ability is completely dependent on this protein. Collectively, these data suggest very strongly that the activation of sporulation by Ime4p is the result of its proposed methyltransferase activity and provide the most direct evidence to date of a physiologic role of m6A in a gene regulatory pathway.