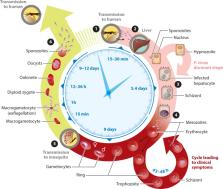 Malaria is a critical public health problem resulting in substantial morbidity and mortality, particularly in developing countries. Owing to the development of resistance toward current therapies, novel approaches to accelerate the development efforts of new malaria therapeutics are urgently needed. There have been significant advancements in the development of in vitro and in vivo experiments that generate data used to inform decisions about the potential merit of new compounds. A comprehensive disease-drug model capable of integrating discrete data from different preclinical and clinical components would be a valuable tool across all stages of drug development. This could have an enormous impact on the otherwise slow and resource-intensive process of traditional clinical drug development.

Thomas E Wellems,  C Ackerman,  X Su … (2013)
Plasmodium falciparum malaria, an infectious disease caused by a parasitic protozoan, claims the lives of nearly a million children each year in Africa alone and is a top public health concern. Evidence is accumulating that resistance to artemisinin derivatives, the frontline therapy for the asexual blood stage of the infection, is developing in southeast Asia. Renewed initiatives to eliminate malaria will benefit from an expanded repertoire of antimalarials, including new drugs that kill circulating P. falciparum gametocytes, thereby preventing transmission. Our current understanding of the biology of asexual blood-stage parasites and gametocytes and the ability to culture them in vitro lends optimism that high-throughput screenings of large chemical libraries will produce a new generation of antimalarial drugs. There is also a need for new therapies to reduce the high mortality of severe malaria. An understanding of the pathophysiology of severe disease may identify rational targets for drugs that improve survival.

Mamoru Ito,  Takeshi Takahashi,  Ryoji Ito … (2012)
Humanized mouse models that have received human cells or tissue transplants are extremely useful in basic and applied human disease research. Highly immunodeficient mice, which do not reject xenografts and support cell and tissue differentiation and growth, are indispensable for generating additional appropriate models. Since the early 2000s, a series of immunodeficient mice appropriate for generating humanized mice has been successively developed by introducing the IL-2Rγ(null) gene (e.g., NOD/SCID/γc(null) and Rag2(null)γc(null) mice). These strains show not only a high rate of human cell engraftment, but also generate well-differentiated multilineage human hematopoietic cells after human hematopoietic stem cell (HSC) transplantation. These humanized mice facilitate the analysis of human hematology and immunology in vivo. However, human hematopoietic cells developed from HSCs are not always phenotypically and functionally identical to those in humans. More recently, a new series of immunodeficient mice compensates for these disadvantages. These mice were generated by genetically introducing human cytokine genes into NOD/SCID/γc(null) and Rag2(null)γc(null) mice. In this review, we describe the current knowledge of human hematopoietic cells developed in these mice. Various human disease mouse models using these humanized mice are summarized.

(+)-SJ733, a clinical candidate for malaria that acts through ATP4 to induce rapid host-mediated clearance of Plasmodium.

María Jiménez-Díaz,  Daniel Ebert,  Yandira Salinas … (2014)
Drug discovery for malaria has been transformed in the last 5 years by the discovery of many new lead compounds identified by phenotypic screening. The process of developing these compounds as drug leads and studying the cellular responses they induce is revealing new targets that regulate key processes in the Plasmodium parasites that cause malaria. We disclose herein that the clinical candidate (+)-SJ733 acts upon one of these targets, ATP4. ATP4 is thought to be a cation-transporting ATPase responsible for maintaining low intracellular Na(+) levels in the parasite. Treatment of parasitized erythrocytes with (+)-SJ733 in vitro caused a rapid perturbation of Na(+) homeostasis in the parasite. This perturbation was followed by profound physical changes in the infected cells, including increased membrane rigidity and externalization of phosphatidylserine, consistent with eryptosis (erythrocyte suicide) or senescence. These changes are proposed to underpin the rapid (+)-SJ733-induced clearance of parasites seen in vivo. Plasmodium falciparum ATPase 4 (pfatp4) mutations that confer resistance to (+)-SJ733 carry a high fitness cost. The speed with which (+)-SJ733 kills parasites and the high fitness cost associated with resistance-conferring mutations appear to slow and suppress the selection of highly drug-resistant mutants in vivo. Together, our data suggest that inhibitors of PfATP4 have highly attractive features for fast-acting antimalarials to be used in the global eradication campaign.

This work is licensed under a Creative Commons Attribution 4.0 International License, which permits unrestricted use, distribution, and reproduction in any medium, provided the original author and source are credited. See credit lines of images or other third-party material in this article for license information