Effects of liraglutide on gallbladder emptying: A randomized, placebo‐controlled trial in adults with overweight or obesity 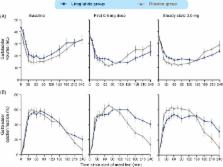 Treatment with liraglutide 3.0 mg has been associated with gallbladder‐related adverse events. To conduct a single‐centre, double‐blind, 12‐week trial comparing the effect of 0.6 mg liraglutide and steady‐state liraglutide 3.0 mg with placebo on gallbladder emptying in adults with body mass index (BMI) ≥27 kg/m 2 and without diabetes.

Participants were randomized 1:1 to once‐daily subcutaneous liraglutide ( n = 26) or placebo ( n = 26), starting at 0.6 mg with 0.6‐mg weekly increments to 3.0 mg, with nutritional and physical activity counselling. A 600‐kcal (23.7 g fat) liquid meal test was performed at baseline, after the first dose and after 12 weeks. The primary endpoint was the 12‐week maximum postprandial gallbladder ejection fraction (GBEF max), measured over 240 minutes after starting the meal.

Treatment with liraglutide did not affect the GBEF max but appeared to prolong the time to GBEF max.

3 years of liraglutide versus placebo for type 2 diabetes risk reduction and weight management in individuals with prediabetes: a randomised, double-blind trial

Carel W. le Roux,  Arne Astrup,  Ken Fujioka … (2017)
Liraglutide 3·0 mg was shown to reduce bodyweight and improve glucose metabolism after the 56-week period of this trial, one of four trials in the SCALE programme. In the 3-year assessment of the SCALE Obesity and Prediabetes trial we aimed to evaluate the proportion of individuals with prediabetes who were diagnosed with type 2 diabetes.

Epidemiology and risk factors for gallstone disease: has the paradigm changed in the 21st century?

Thomas E. Shaffer (2005)
Gallstone disease is common and costly, creating over 700,000 cholecystectomies annually. Its complications consume approximately $6.5 billion in the United States. Surveys using noninvasive ultrasonography have identified its true prevalence and the associated risk factors. In developed countries, at least 10% of white adults harbor cholesterol gallstones; women have twice the risk, and age further increases the prevalence in both sexes. Gallstones reach epidemic proportions in the North and South American Indian populations, accompanied by an increased risk for gallbladder cancer. In contrast, the rate in sub-Saharan Africa and Asia is quite low. Obesity, a major risk factor, likely relates to insulin resistance (the metabolic syndrome). Evolution and circumstance in American Indians may have ironically selected those with "thrifty" genes that conserve energy. Our abundant access to food places us at the increased risk of obesity and cholelithiasis. The general rise in obesity in many countries raises the specter of heightened disease, best identified by epidemiologic studies.