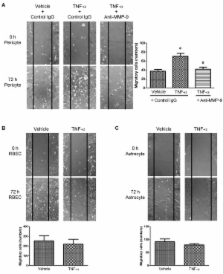 Increased matrix metalloproteinase (MMP)-9 in the plasma and brain is associated with blood-brain barrier (BBB) disruption through proteolytic activity in neuroinflammatory diseases. MMP-9 is present in the brain microvasculature and its vicinity, where brain microvascular endothelial cells (BMECs), pericytes and astrocytes constitute the BBB. Little is known about the cellular source and role of MMP-9 at the BBB. Here, we examined the ability of pericytes to release MMP-9 and migrate in response to inflammatory mediators in comparison with BMECs and astrocytes, using primary cultures isolated from rat brains.

The culture supernatants were collected from primary cultures of rat brain endothelial cells, pericytes, or astrocytes. MMP-9 activities and levels in the supernatants were measured by gelatin zymography and western blot, respectively. The involvement of signaling molecules including mitogen-activated protein kinases (MAPKs) and phosphoinositide-3-kinase (PI3K)/Akt in the mediation of tumor necrosis factor (TNF)-α-induced MMP-9 release was examined using specific inhibitors. The functional activity of MMP-9 was evaluated by a cell migration assay.

Zymographic and western blot analyses demonstrated that TNF-α stimulated pericytes to release MMP-9, and this release was much higher than from BMECs or astrocytes. Other inflammatory mediators [interleukin (IL)-1β, interferon-γ, IL-6 and lipopolysaccharide] failed to induce MMP-9 release from pericytes. TNF-α-induced MMP-9 release from pericytes was found to be mediated by MAPKs and PI3K. Scratch wound healing assay showed that in contrast to BMECs and astrocytes the extent of pericyte migration was significantly increased by TNF-α. This pericyte migration was inhibited by anti-MMP-9 antibody.

These findings suggest that pericytes are most sensitive to TNF-α in terms of MMP-9 release, and are the major source of MMP-9 at the BBB. This pericyte-derived MMP-9 initiated cellular migration of pericytes, which might be involved in pericyte loss in the damaged BBB.

Shinsuke Nakagawa,  Mária A Deli,  Hiroko Kawaguchi … (2009)
Blood-brain barrier (BBB) characteristics are induced and maintained by cross-talk between brain microvessel endothelial cells and neighbouring elements of the neurovascular unit. While pericytes are the cells situated closest to brain endothelial cells morphologically and share a common basement membrane, they have not been used in co-culture BBB models for testing drug permeability. We have developed and characterized a new syngeneic BBB model using primary cultures of the three main cell types of cerebral microvessels. The co-culture of endothelial cells, pericytes and astrocytes mimick the anatomical situation in vivo. In the presence of both pericytes and astrocytes rat brain endothelial cells expressed enhanced levels of tight junction (TJ) proteins occludin, claudin-5 and ZO-1 with a typical localization at the cell borders. Further morphological evidence of the presence of interendothelial TJs was provided by electron microscopy. The transendothelial electrical resistance (TEER) of brain endothelial monolayers in triple co-culture, indicating the tightness of TJs reached 400Omegacm(2) on average, while the endothelial permeability coefficients (P(e)) for fluorescein was in the range of 3x10(-6)cm/s. Brain endothelial cells in the new model expressed glucose transporter-1, efflux transporters P-glycoprotein and multidrug resistance protein-1, and showed a polarized transport of rhodamine 123, a ligand for P-glycoprotein. To further characterize the model, drug permeability assays were performed using a set of 19 compounds with known in vivo BBB permeability. Good correlation (R(2)=0.89) was found between in vitroP(e) values obtained from measurements on the BBB model and in vivo BBB permeability data. The new BBB model, which is the first model to incorporate pericytes in a triple co-culture setting, can be a useful tool for research on BBB physiology and pathology and to test candidate compounds for centrally acting drugs.

H Randeva,  B. Tan,  Jing Chen … (2008)
Visfatin is a novel adipokine whose plasma concentrations are altered in obesity and obesity-related disorders; these states are associated with an increased incidence of cardiovascular disease. We therefore investigated the effect of visfatin on vascular endothelial growth factor (VEGF) and matrix metalloproteinases (MMP-2, MMP-9) production and the potential signalling cascades. In human umbilical vein endothelial cells (HUVECs), visfatin significantly and dose-dependently up-regulated gene expression and protein production of VEGF and MMPs and down-regulated expression of tissue inhibitors of MMPs (TIMP-1 and TIMP-2). The gelatinolytic activity of MMPs (analysed by zymography) correlated with mRNA and western blot findings. Interestingly, visfatin significantly up-regulated VEGF receptor 2 expression. Inhibition of VEGFR2 and VEGF [by soluble FMS-like tyrosine kinase-1 (sFlt1)] down-regulated visfatin-induced MMP induction. Visfatin induced dose- and time-dependent proliferation and capillary-like tube formation. Importantly, visfatin was noted to have anti-apoptotic effects. In HUVECs, visfatin dose-dependently activated PI3K/Akt (phosphatidylinositol 3-kinase/Akt) and ERK(1/2) (extracellular signal-regulated kinase) pathways. The functional effects and MMP/VEGF induction were shown to be dependent on the MAPK/PI3K-Akt/VEGF signalling pathways. Inhibition of PI3K/Akt and ERK(1/2) pathways led to significant decrease of visfatin-induced MMP and VEGF production and activation, along with significant reduction in endothelial proliferation and capillary tube formation. Our data provide the first evidence of visfatin-induced endothelial VEGF and MMP production and activity. Further, we show for the first time the involvement of the MAPK and PI3K/Akt signalling pathways in mediating these actions, as well as endothelial cell proliferation. Collectively, our findings provide novel insights into visfatin-induced endothelial angiogenesis.