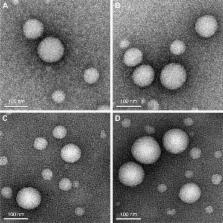 The aim of this study is to develop a novel RGD and TAT co-modified docetaxel (DTX)-loaded liposome (LP) by the emulsification-solvent evaporation method. The prepared LPs were found to be in the size of 100 nm–110 nm. The transmission electron microscope photomicrographs were smooth, sub-spherical in shape, and aggregated to form small clusters. The DTX cumulative release from TAT and RGD co-modified LPs was significantly higher than that from other LPs due to decreased diffusion distance. Results of cell uptake showed that surface modification could indicate when cell internalization was changed and more drugs entered the cells successfully. Surprisingly, TAT and RGD co-modified DTX-LPs demonstrated a superior antiproliferative effect on A549 cells with a possible mechanism that suppressed the multidrug resistance phenomenon and exhibited a clear synergistic effect. In antitumor study, our results indicated that the form of TAT and RGD co-modified LPs had a better antitumor effect in vivo than the other formulations.

Véronique Préat,  Aude Le Roy,  Fabienne Danhier (2012)
The integrin α(v)β(3) plays an important role in angiogenesis. It is expressed on tumoral endothelial cells as well as on some tumor cells. RGD peptides are well-known to bind preferentially to the α(v)β(3) integrin. In this context, targeting tumor cells or tumor vasculature by RGD-based strategies is a promising approach for delivering anticancer drugs or contrast agents for cancer therapy and diagnosis. RGD-based strategies include antagonist drugs (peptidic or peptidomimetic) of the RGD sequence, RGD-conjugates, and the grafting of the RGD peptide or peptidomimetic, as targeting ligand, at the surface of nanocarriers. Although all strategies are overviewed, this review aims to particularly highlight the position of RGD-based nanoparticles in cancer therapy and imaging. This review is divided into three parts: the first one describes the context of angiogenesis, the role of the integrin α(v)β(3), and the binding of the RGD peptide to this integrin; the second one focuses on RGD-based strategies in cancer therapy; while the third one focuses on RGD-based strategies in cancer diagnosis.

Ying-Jun She,  Chunxue Bai,  Nan Yang … (2013)
In 2008, lung cancer replaced liver cancer as the number one cause of death among people with malignant tumors in China. The registered lung cancer mortality rate increased by 464.84% in the past 3 decades, which imposes an enormous burden on patients, health-care professionals, and society. We performed a systematic review of the published data on lung cancer in China between 1990 and 2011 to analyze the incidence and mortality rates, economic burden, and risk factors of cancer and the effectiveness of interventions. Lung cancer incidence varies within China. People in eastern China, especially women, likely have a higher risk of developing lung cancer than those in western China. The crude mortality rates from lung cancer in 2008 were 47.51 per 100,000 men and 22.69 per 100,000 women. The crude mortality rate was highest in Shanghai (76.49 per 100,000 men and 35.82 per 100,000 women) and lowest in Tibet (25.14 per 100,000 men) and Ningxia (12.09 per 100,000 women). Smoking and environmental pollution are major risk factors for lung cancer in China. Continuous efforts should be concentrated on education of the general public regarding lung cancer to increase prevention and early detection. Specific interventions need to be implemented to reduce smoking rates and environmental risk factors. Standardized treatment protocols should be adapted in China.

Shen Feng,  Laiqiang Huang,  Chunyan Tan … (2013)
We developed a system of nanoparticles (NPs) of cholic acid functionalized, star-shaped block copolymer consisting of PLGA and vitamin E TPGS for sustained and controlled delivery of docetaxel for treatment of cervical cancer, which demonstrated superior in vitro and in vivo performance in comparison with the drug-loaded PLGA NPs and the linear PLGA-b-TPGS copolymer NPs. The star-shaped block copolymer CA-PLGA-b-TPGS of three branch arms was synthesized through the core-first approach and characterized by (1)H NMR, GPC and TGA. The drug- or coumarin 6-loaded NPs were prepared by a modified nanoprecipitation technique and then characterized in terms of size and size distribution, surface morphology and surface charge, drug encapsulation efficiency, in vitro release profile and physical state of the encapsulated drug. The CA-PLGA-b-TPGS NPs were found to have the highest cellular uptake efficiency, the highest antitumor efficacy compared with PLGA-b-TPGS NPs and PLGA NPs. The results suggest that such a star-shaped copolymer CA-PLGA-b-TPGS could be used as a new molecular biomaterial for drug delivery of high efficiency. Copyright © 2013 Elsevier Ltd. All rights reserved.