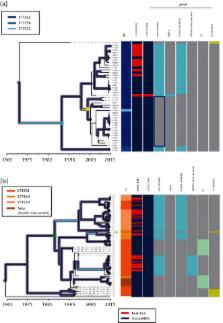 The first extensively drug resistant (XDR) Neisseria gonorrhoeae strain with high resistance to the extended-spectrum cephalosporin ceftriaxone was identified in 2009 in Japan, but no other strain with this antimicrobial-resistance profile has been reported since. However, surveillance to date has been based on phenotypic methods and sequence typing, not genome sequencing. Therefore, little is known about the local population structure at the genomic level, and how resistance determinants and lineages are distributed and evolve. We analysed the whole-genome sequence data and the antimicrobial-susceptibility testing results of 204 strains sampled in a region where the first XDR ceftriaxone-resistant N. gonorrhoeae was isolated, complemented with 67 additional genomes from other time frames and locations within Japan. Strains resistant to ceftriaxone were not found, but we discovered a sequence type (ST)7363 sub-lineage susceptible to ceftriaxone and cefixime in which the mosaic penA allele responsible for reduced susceptibility had reverted to a susceptible allele by recombination. Approximately 85 % of isolates showed resistance to fluoroquinolones (ciprofloxacin) explained by linked amino acid substitutions at positions 91 and 95 of GyrA with 99 % sensitivity and 100 % specificity. Approximately 10 % showed resistance to macrolides (azithromycin), for which genetic determinants are less clear. Furthermore, we revealed different evolutionary paths of the two major lineages: single acquisition of penA X in the ST7363-associated lineage, followed by multiple independent acquisitions of the penA X and XXXIV in the ST1901-associated lineage. Our study provides a detailed picture of the distribution of resistance determinants and disentangles the evolution of the two major lineages spreading worldwide.

Sudhir Kumar,  Alan Filipski,  Glen Stecher … (2013)
We announce the release of an advanced version of the Molecular Evolutionary Genetics Analysis (MEGA) software, which currently contains facilities for building sequence alignments, inferring phylogenetic histories, and conducting molecular evolutionary analysis. In version 6.0, MEGA now enables the inference of timetrees, as it implements the RelTime method for estimating divergence times for all branching points in a phylogeny. A new Timetree Wizard in MEGA6 facilitates this timetree inference by providing a graphical user interface (GUI) to specify the phylogeny and calibration constraints step-by-step. This version also contains enhanced algorithms to search for the optimal trees under evolutionary criteria and implements a more advanced memory management that can double the size of sequence data sets to which MEGA can be applied. Both GUI and command-line versions of MEGA6 can be downloaded from www.megasoftware.net free of charge.

Kazutaka Katoh,  Daron Standley (2013)
We report a major update of the MAFFT multiple sequence alignment program. This version has several new features, including options for adding unaligned sequences into an existing alignment, adjustment of direction in nucleotide alignment, constrained alignment and parallel processing, which were implemented after the previous major update. This report shows actual examples to explain how these features work, alone and in combination. Some examples incorrectly aligned by MAFFT are also shown to clarify its limitations. We discuss how to avoid misalignments, and our ongoing efforts to overcome such limitations.

New algorithms and methods to estimate maximum-likelihood phylogenies: assessing the performance of PhyML 3.0.

Stéphane Guindon,  Maria Anisimova,  Vincent Lefort … (2010)
PhyML is a phylogeny software based on the maximum-likelihood principle. Early PhyML versions used a fast algorithm performing nearest neighbor interchanges to improve a reasonable starting tree topology. Since the original publication (Guindon S., Gascuel O. 2003. A simple, fast and accurate algorithm to estimate large phylogenies by maximum likelihood. Syst. Biol. 52:696-704), PhyML has been widely used (>2500 citations in ISI Web of Science) because of its simplicity and a fair compromise between accuracy and speed. In the meantime, research around PhyML has continued, and this article describes the new algorithms and methods implemented in the program. First, we introduce a new algorithm to search the tree space with user-defined intensity using subtree pruning and regrafting topological moves. The parsimony criterion is used here to filter out the least promising topology modifications with respect to the likelihood function. The analysis of a large collection of real nucleotide and amino acid data sets of various sizes demonstrates the good performance of this method. Second, we describe a new test to assess the support of the data for internal branches of a phylogeny. This approach extends the recently proposed approximate likelihood-ratio test and relies on a nonparametric, Shimodaira-Hasegawa-like procedure. A detailed analysis of real alignments sheds light on the links between this new approach and the more classical nonparametric bootstrap method. Overall, our tests show that the last version (3.0) of PhyML is fast, accurate, stable, and ready to use. A Web server and binary files are available from http://www.atgc-montpellier.fr/phyml/.