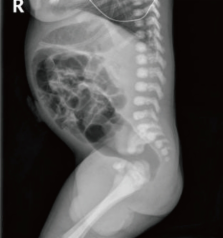 Townes-Brocks syndrome (TBS) is a rare autosomal dominant congenital disorder caused by mutations in the SALL1 gene. Its signs and symptoms overlap with other genetic syndromes, including VACTERL association, Pendred syndrome, Baller-Gerold syndrome, and cat eye syndrome. Structural vertebral abnormalities, hypoplasia of the thumb, and radial bone abnormalities, which are not usually associated with TBS, help in the differential diagnosis of these syndromes. We report the case of a family whose members were diagnosed with TBS with congenital hypothyroidism and had a novel SALL1 gene mutation.

W Engel,  K Devriendt,  W Proesmans … (1999)
Townes-Brocks syndrome (TBS) is an autosomal dominantly inherited malformation syndrome characterized by anal, renal, limb, and ear anomalies. Recently, we showed that mutations in the putative zinc finger transcription factor gene SALL1 cause TBS. To determine the spectrum of SALL1 mutations and to investigate the genotype-phenotype correlations in TBS, we examined 23 additional families with TBS or similar phenotypes for SALL1 mutations. In 9 of these families mutations were identified. None of the mutations has previously been described. Two of these mutations are nonsense mutations, one of which occurred in three unrelated families. Five of the mutations are short deletions. All of the mutations are located 5' of the first double zinc finger (DZF) encoding region and are therefore predicted to result in putative prematurely terminated proteins lacking all DZF domains. This suggests that only SALL1 mutations that remove the DZF domains result in TBS. We also present evidence that in rare cases SALL1 mutations can lead to phenotypes similar to Goldenhar syndrome. However, phenotypic differences in TBS do not seem to depend on the site of mutation.

Kalle O J Simola,  Jürgen Kohlhase,  Ronit Chafai … (2005)
Townes-Brocks syndrome is an autosomal dominantly inherited disorder, which comprises multiple birth defects including renal, ear, anal, and limb malformations. TBS has been shown to result from mutations in SALL1, a human gene related to the developmental regulator SAL of Drosophila melanogaster. The SALL1 gene product is a zinc finger protein thought to act as a transcription factor. It contains four highly conserved, evenly distributed C2H2 double zinc finger domains. A single C2H2 motif is attached to the second domain, and at the amino terminus SALL1 contains a C2HC motif. Most mutations causing TBS are clustered in the N-terminal third of the SALL1 coding region and result in the production of truncated proteins containing only one or none of the C2H2 domains and the N-terminal transcriptional repressor domain of SALL1. Twenty-three SALL1 mutations were reported prior to this work, 22 of which are located in exon 2, 5' of the second double zinc finger-encoding region. Here we present 12 novel mutations in SALL1 associated with Townes-Brocks syndrome in 13 unrelated families. These include three nonsense mutations, three short insertions and six short deletions. Thus the number of SALL1 mutations increases to 35. Rare phenotypical features among mutation positive patients include hypothyroidism, vaginal aplasia with bifid uterus, cryptorchidism, bifid scrotum without hypospadia scrotalis, unilateral chorioretinal coloboma with loss of vision, dorsal hypoplasia of the corpus callosum, and umbilical hernia.

This is an open-access article distributed under the terms of the Creative Commons Attribution Non-Commercial License ( http://creativecommons.org/licenses/by-nc/3.0/) which permits unrestricted non-commercial use, distribution, and reproduction in any medium, provided the original work is properly cited.