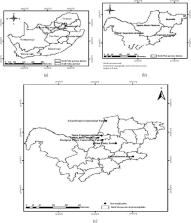 The aim of this study was to characterise Vibrio species of water samples collected from taps, boreholes, and dams in the North West province, South Africa, and assess biocontrol potentials of their bacteriophages. Fifty-seven putative Vibrio isolates were obtained on thiosulfate-citrate-bile-salt-sucrose agar and identified using biochemical tests and species-specific PCRs. Isolates were further characterised based on the presence of virulence factors, susceptibility to eleven antibiotics, and biofilm formation potentials. Twenty-two (38.60%) isolates were confirmed as Vibrio species, comprising V. harveyi (45.5%, n = 10), V. parahaemolyticus (22.7%, n = 5), V. cholerae (13.6%, n = 3), V. mimicus (9.1%, n = 2), and V. vulnificus (9.1%, n = 2). Three of the six virulent genes screened were positively amplified; four V. parahaemolyticus possessed the tdh (18.18%) and trh (18.18%) genes, while the zot gene was harboured by 3 V. cholerae (13.64%) and one V. mimicus (4.55%) isolate. Isolates revealed high levels of resistance to cephalothin (95.45%), ampicillin (77.27%), and streptomycin (40.91%), while lower resistances (4.55%–27.27%) were recorded for other antimicrobials. Sixteen (72.7%) isolates displayed multiple antibiotic-resistant properties. Cluster analysis of antibiotic resistance revealed a closer relationship between Vibrio isolates from different sampling sites. The Vibrio species displayed biofilm formation potentials at 37°C (63.6, n = 14), 35°C (50%, n = 11), and 25°C (36.4%, n = 8). Two phages isolated in this study (vB_VpM_SA3V and vB_VcM_SA3V) were classified as belonging to the family Myoviridae based on electron microscopy. These were able to lyse multidrug-resistant V. parahaemolyticus and V. cholerae strains. These findings not only indicate the presence of antibiotic-resistant virulent Vibrio species from dam, borehole, and tap water samples that could pose a health risk to humans who either come in contact with or consume water but also present these lytic phages as alternative agents that can be exploited for biological control of these pathogenic strains.

5500 Phages examined in the electron microscope.

H Ackermann (2007)
"Phages" include viruses of eubacteria and archaea. At least 5568 phages have been examined in the electron microscope since the introduction of negative staining in 1959. Most virions (96%) are tailed. Only 208 phages (3.7%) are polyhedral, filamentous, or pleomorphic. Phages belong to one order, 17 families, and three "floating" groups. Phages are found in 11 eubacterial and archaeal phyla and infect 154 host genera, mostly of the phyla Actinobacteria, Firmicutes, and Proteobacteria. Of the tailed phages, 61% have long, noncontractile tails and belong to the family Siphoviridae. Convergent evolution is visible in the morphology of certain phage groups.

João P. S. Cabral (2010)
Water is essential to life, but many people do not have access to clean and safe drinking water and many die of waterborne bacterial infections. In this review a general characterization of the most important bacterial diseases transmitted through water—cholera, typhoid fever and bacillary dysentery—is presented, focusing on the biology and ecology of the causal agents and on the diseases’ characteristics and their life cycles in the environment. The importance of pathogenic Escherichia coli strains and emerging pathogens in drinking water-transmitted diseases is also briefly discussed. Microbiological water analysis is mainly based on the concept of fecal indicator bacteria. The main bacteria present in human and animal feces (focusing on their behavior in their hosts and in the environment) and the most important fecal indicator bacteria are presented and discussed (focusing on the advantages and limitations of their use as markers). Important sources of bacterial fecal pollution of environmental waters are also briefly indicated. In the last topic it is discussed which indicators of fecal pollution should be used in current drinking water microbiological analysis. It was concluded that safe drinking water for all is one of the major challenges of the 21st century and that microbiological control of drinking water should be the norm everywhere. Routine basic microbiological analysis of drinking water should be carried out by assaying the presence of Escherichia coli by culture methods. Whenever financial resources are available, fecal coliform determinations should be complemented with the quantification of enterococci. More studies are needed in order to check if ammonia is reliable for a preliminary screening for emergency fecal pollution outbreaks. Financial resources should be devoted to a better understanding of the ecology and behavior of human and animal fecal bacteria in environmental waters.

Global dissemination of Vibrio parahaemolyticus serotype O3:K6 and its serovariants.

S. Bhattacharya,  G. Nair,  David A. Sack … (2006)
Vibrio parahaemolyticus is recognized as a cause of food-borne gastroenteritis, particularly in the Far East, where raw seafood consumption is high. An unusual increase in admissions of V. parahaemolyticus cases was observed at the Infectious Diseases Hospital in Calcutta, a city in the northeastern part of India, beginning February 1996. Analysis of the strains revealed that a unique serotype, O3:K6, not previously isolated during the surveillance in Calcutta accounted for 50 to 80% of the infections in the following months. After this report, O3:K6 isolates identical to those isolated in Calcutta were reported from food-borne outbreaks and from sporadic cases in Bangladesh, Chile, France, Japan, Korea, Laos, Mozambique, Peru, Russia, Spain, Taiwan, Thailand, and the United States. Other serotypes, such as O4:K68, O1:K25, and O1:KUT (untypeable), that had molecular characteristics identical to that of the O3:K6 serotype were subsequently documented. These serotypes appeared to have diverged from the O3:K6 serotype by alteration of the O:K antigens and were defined as "serovariants" of the O3:K6 isolate. O3:K6 and its serovariants have now spread into Asia, America, Africa, and Europe. This review traces the genesis, virulence features, molecular characteristics, serotype variants, environmental occurrence, and global spread of this unique clone of V. parahaemolyticus.