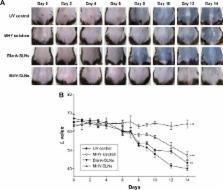 Hyperpigmentation caused by melanin overproduction is a major skin disorder in humans. Inhibition of tyrosinase, a key regulator of melanin production, has been used as an effective strategy to treat hyperpigmentation. In this study, we investigated the use of solid lipid nanoparticles (SLNs) as a highly effective and nontoxic means to deliver a newly synthesized potent tyrosinase inhibitor, MHY498, and to target melanocytes through the skin. MHY498-loaded SLNs (MHY-SLNs) were prepared by an oil-in-water emulsion solvent-evaporation method, and their morphological and physicochemical properties were characterized. MHY-SLNs showed a prolonged drug-release profile and higher skin permeation than that of MHY solution. In an in vivo evaluation of antimelanogenic activity, MHY-SLNs showed a prominent inhibitory effect against ultraviolet B-induced melanogenesis, resulting in no change in the skin color of C57BL/6 mouse, compared with that observed in an MHY solution-treated group and an untreated control group. The antimelanogenic effect of MHY-SLNs was further confirmed through Fontana–Masson staining. Importantly, MHY-SLNs did not induce any toxic effects in the L929 cell line. Overall, these data indicate that MHY-SLNs show promise in the topical treatment of hyperpigmentation.

An Updated Review of Tyrosinase Inhibitors

Te-Sheng Chang (2009)
Tyrosinase is a multifunctional, glycosylated, and copper-containing oxidase, which catalyzes the first two steps in mammalian melanogenesis and is responsible for enzymatic browning reactions in damaged fruits during post-harvest handling and processing. Neither hyperpigmentation in human skin nor enzymatic browning in fruits are desirable. These phenomena have encouraged researchers to seek new potent tyrosinase inhibitors for use in foods and cosmetics. This article surveys tyrosinase inhibitors newly discovered from natural and synthetic sources. The inhibitory strength is compared with that of a standard inhibitor, kojic acid, and their inhibitory mechanisms are discussed.

J Bykowski,  N Kollias,  G Zonios (2001)
Noninvasive and real-time analysis of skin properties is useful in a wide variety of applications. In particular, the quantitative assessment of skin in terms of hemoglobin and melanin content, as well as in terms of its light scattering properties, is a challenging problem in dermatology. We present here a technique for examining human skin, based on the in vivo measurement of diffuse reflectance spectra in the visible and near-infrared ranges of the electromagnetic spectrum. Spectra were measured by means of a fiber optic probe, and they were analyzed using an analytical model of light diffusion in the skin. The results of the analysis indicate that it is possible to obtain quantitative information about hemoglobin and melanin content, as well as basic information regarding the scattering properties of the skin.