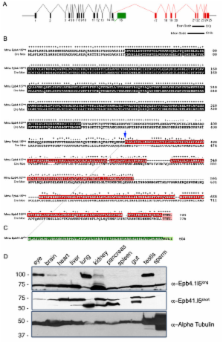 The FERM domain containing protein Mosaic Eyes (Moe) interacts with Crumbs proteins, which are important regulators of apical identity and size. In zebrafish, loss-of-function mutations in moe result in defects in brain ventricle formation, retinal pigmented epithelium and neural retinal development, pericardial edema, and tail curvature. In humans and mice, there are two major alternately spliced isoforms of the Moe orthologue, Erythrocyte Protein Band 4.1-Like 5 (Epb4.1l5), which we have named Epb4.1l5 long and Epb4.1l5 short, that differ after the FERM domain. Interestingly, Moe and both Epb4.1l5 isoforms have a putative C' terminal Type-I PDZ-Binding Domain (PBD). We previously showed that the N' terminal FERM domain in Moe directly mediates interactions with Crumbs proteins and Nagie oko (Nok) in zebrafish, but the function of the C'terminal half of Moe/Epb4.1l5 has not yet been examined.

To define functionally important domains in zebrafish Moe and murine Epb4.1l5, we tested whether injection of mRNAs encoding these proteins could rescue defects in zebrafish moe - embryos. Injection of either moe or epb4.1l5 long mRNA, but not epb4.1l5 short mRNA, could rescue moe - embryonic defects. We also tested whether mRNA encoding C' terminal truncations of Epb4.1l5 long or chimeric constructs with reciprocal swaps of the isoform-specific PBDs could rescue moe - defects. We found that injection of the Epb4.1l5 short chimera (Epb4.1l5 short+long_PBD), containing the PBD from Epb4.1l5 long, could rescue retinal and RPE defects in moe - mutants, but not brain ventricle formation. Injection of the Epb4.1l5 long chimera (Epb4.1l5 long+short_PBD), containing the PBD from Epb4.1l5 short, rescued retinal defects, and to a large extent rescued RPE integrity. The only construct that caused a dominant phenotype in wild-type embryos, was Epb4.1l5 long+short_PBD, which caused brain ventricle defects and edema that were similar to those observed in moe - mutants. Lastly, the morphology of rod photoreceptors in moe - mutants where embryonic defects were rescued by moe or epb4.1l5 long mRNA injection is abnormal and their outer segments are larger than normal.

Taken together, the data reveal tissue specificity for the function of the PBD in Epb4.1l5 long, and suggest that additional C' terminal sequences are important for zebrafish retinal development. Additionally, our data provide further evidence that Moe is a negative regulator of rod outer segment size.

crumbs encodes an EGF-like protein expressed on apical membranes of Drosophila epithelial cells and required for organization of epithelia.

E Knust,  C Theres,  U Tepass (1990)
We describe the molecular characterization of the Drosophila gene crumbs, which encodes an integral membrane protein with 30 EGF-like repeats in the extracellular part and exhibits a striking expression pattern. The protein is exclusively localized on the apical membranes of epithelial cells and concentrated at the borders between cells. Mutations in crumbs lead to severe disruptions in the organization of ectodermally derived epithelia and in some cases to cell death in these tissues. The structure and the expression pattern of the protein and the phenotype of mutations indicate a function of crumbs during the development of epithelia, possibly for the establishment and/or maintenance of cell polarity.

Crumbs, the Drosophila homologue of human CRB1/RP12, is essential for photoreceptor morphogenesis.

Guy Tanentzapf,  Milena Pellikka,  Ulrich Tepass … (2002)
The apical transmembrane protein Crumbs is a central regulator of epithelial apical-basal polarity in Drosophila. Loss-of-function mutations in the human homologue of Crumbs, CRB1 (RP12), cause recessive retinal dystrophies, including retinitis pigmentosa. Here we show that Crumbs and CRB1 localize to corresponding subdomains of the photoreceptor apical plasma membrane: the stalk of the Drosophila photoreceptor and the inner segment of mammalian photoreceptors. These subdomains support the morphogenesis and orientation of the photosensitive membrane organelles: rhabdomeres and outer segments, respectively. Drosophila Crumbs is required to maintain zonula adherens integrity during the rapid apical membrane expansion that builds the rhabdomere. Crumbs also regulates stalk development by stabilizing the membrane-associated spectrin cytoskeleton, a function mechanistically distinct from its role in epithelial apical-basal polarity. We propose that Crumbs is a central component of a molecular scaffold that controls zonula adherens assembly and defines the stalk as an apical membrane subdomain. Defects in such scaffolds may contribute to human CRB1-related retinal dystrophies.

Mutations in a human homologue of Drosophila crumbs cause retinitis pigmentosa (RP12).

I. Heredia-de La Cruz,  Annemarie Wagemakers,  Sudha Bhattacharya … (1999)
Retinitis pigmentosa (RP) comprises a clinically and genetically heterogeneous group of diseases that afflicts approximately 1.5 million people worldwide. Affected individuals suffer from a progressive degeneration of the photoreceptors, eventually resulting in severe visual impairment. To isolate candidate genes for chorioretinal diseases, we cloned cDNAs specifically or preferentially expressed in the human retina and the retinal pigment epithelium (RPE) through a novel suppression subtractive hybridization (SSH) method. One of these cDNAs (RET3C11) mapped to chromosome 1q31-q32.1, a region harbouring a gene involved in a severe form of autosomal recessive RP characterized by a typical preservation of the para-arteriolar RPE (RP12; ref. 3). The full-length cDNA encodes an extracellular protein with 19 EGF-like domains, 3 laminin A G-like domains and a C-type lectin domain. This protein is homologous to the Drosophila melanogaster protein crumbs (CRB), and denoted CRB1 (crumbs homologue 1). In ten unrelated RP patients with preserved para-arteriolar RPE, we identified a homozygous AluY insertion disrupting the ORF, five homozygous missense mutations and four compound heterozygous mutations in CRB1. The similarity to CRB suggests a role for CRB1 in cell-cell interaction and possibly in the maintenance of cell polarity in the retina. The distinct RPE abnormalities observed in RP12 patients suggest that CRB1 mutations trigger a novel mechanism of photoreceptor degeneration.

[1 ]Department of Biology and the Molecular and Cellular Biology Program, University of Massachusetts, Amherst, MA, 01003, USA