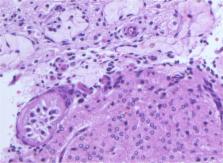 Microdissection testicular sperm extraction (micro‐ TESE) was performed on five Japanese men with non‐mosaic Klinefelter's syndrome ( KS) and non‐obstructive azoospermia in the authors' department. Here is reported the operative results and partner's clinical course for two cases where spermatozoa could be acquired. Also encountered was a man with non‐mosaic KS with the partial deletion of azoospermia factor ( AZF)b. Because this is rare, it is reported in detail in the context of the previous literature. This case series describes the first experience of micro‐ TESE by gynecologists in the current department.

The egg collection date was adjusted to the micro‐ TESE day by using the modified ultra‐long method. Intracytoplasmic sperm injection ( ICSI) was implemented for two men whose spermatozoa were acquired by micro‐ TESE, with these progressing to the blastocyst stage. Subsequently, one case conceived after the transfer of fresh embryos and a healthy baby was delivered. However, spermatozoa could not be retrieved from the man with non‐mosaic KS who was harboring the partial deletion of AZFb.

These findings suggest that ovulation induction by using the modified ultra‐long method with micro‐ TESE and ICSI on the same day represents an effective treatment option for men with non‐mosaic KS. As there are cases where AZF deletion is recognized among patients with non‐mosaic KS, screening before micro‐ TESE is strongly recommended.

S Marchand,  B Ducot,  J Tabaste … (1991)
To estimate the prevalence and main causes of infertility, a multicentre survey was conducted over 1 year (July 1988-June 1989) in three regions of France. All the 1686 couples in these regions, who consulted a practitioner for primary or secondary infertility during this period, were included in the investigation. The prevalence rate of infertility was found to be 14.1%, indicating that one woman out of seven in France will consult a doctor for an infertility problem during her reproductive life. The main causes of female infertility were ovulation disorders (32%) and tubal damage (26%), and of male infertility oligo-terato-asthenozoospermia (21%), asthenozoospermia (17%), teratozoospermia (10%) and azoospermia (9%). Infertility was also found to be caused by disorders in both the male and female partners together; thus in 39% of cases both the man and woman presented with disorders. The woman alone was responsible for infertility in one-third of cases and the man alone in one-fifth. Unexplained infertility was found in 8% of the couples surveyed.

Csilla Krausz,  Jane Simoni,  Saskia Bakker (2004)
Microdeletions of the Y chromosome are the second most frequent genetic cause of spermatogenetic failure in infertile men after the Klinefelter syndrome. The molecular diagnosis of Y-chromosomal microdeletions is routinely performed in the workup of male infertility in men with azoospermia or severe oligozoospermia. Since 1999, the European Academy of Andrology (EAA) and the European Molecular Genetics Quality Network (EMQN) support the improvement of the quality of the diagnostic assays by publication of the laboratory guidelines for molecular diagnosis of Y-chromosomal microdeletions and by offering external quality assessment trials. The present revision of the 1999 laboratory guidelines summarizes the results of a 'Best Practice Meeting' held in Florence (Italy) in October 2003. The basic protocol for microdeletion screening suggested in the 1999 guidelines proved to be very accurate, sensitive and robust. In the light of the recent advance in the knowledge of the Y chromosome sequence and of the mechanism of microdeletion it was agreed that the basic 1999 protocol, based on two multiplex polymerase chain reactions each covering the three AZF regions, is still fully valid and appropriate for accurate diagnosis.