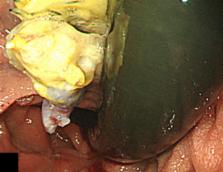 ScienceOpenPublisherPMC
Bookmark
There is no author summary for this article yet. Authors can add summaries to their articles on ScienceOpen to make them more accessible to a non-specialist audience.
Duodenal varix rupture is a life-threating condition that calls for immediate hemostasis. EUS-guided glue injection and coil deployment have been reported as effective means for obliterating gastric varices, but the therapy has been limited to a few case reports of duodenal varices. A 76-year-old woman with unresectable pancreatic head cancer was admitted to our hospital with melena and faintness of sudden onset. At admission, the patient had severe anemia and elevation of the blood urea nitrogen level (blood test results: hemoglobin, 4.3 mg/dL; blood urea nitrogen level, 28.0 mg/dL). CT revealed occlusion of the superior mesenteric vein and portal vein by invasive tumor, and posterior lower pancreatic duodenal varices (Figs. 1A and B). Endoscopy revealed multinodular varices from the second portion to the third of the duodenum and a white plug on 1 of the varices (Fig. 2). Banding was initially performed by an earlier endoscopist (Fig. 3). Because multinodular duodenal varices had been inadequately treated with banding, EUS (GF TYPE UCT-260, Olympus Medical System, Tokyo, Japan) was performed and showed duodenal varices with rich blood flow (Fig. 4). Subsequently, to achieve complete obliteration, EUS-guided injection of cyanoacrylate (CA) was performed. We prepared one 2-mL syringe filled with 0.5 mL of undiluted CA (N-butyl-2-cyanoacrylate, Histoacryl; B. Braun, Barcelona, Spain) and two 5-mL syringes with saline solution for flushing. A disposable 22-gauge FNA needle (Boston Scientific, Natick, Mass) was advanced through the working channel of the endoscope. Under EUS guidance, the target varix was punctured with the needle (Fig. 5). After backflow of blood into the needle was confirmed, saline solution was injected into the varix. Immediately thereafter, 0.5 mL of undiluted CA was injected, followed by saline solution (Video 1, available online at www.VideoGIE.org). We repeated the procedure 3 times and exchanged the needles after each injection. Follow-up CT showed extinction of contrast enhancement of the varices (Figs. 6A and B). The patient was discharged 15 days after the procedure. At her 6-month follow-up visit after the procedure, the patient had not experienced any new episodes of bleeding. Endoscopy 2 months later revealed discharge of the injected CA resulting from elimination of the varices (Fig. 7). Figure 1 A, B, CT scans showing contrast enhancement in the varices. Figure 2 Endoscopic view showing a white plug on 1 of the varices. Figure 3 Banding was performed on the varix. Figure 4 EUS view showing duodenal varices around the self-expanding metal stent. Figure 5 22G EUS-FNA needle punctured into the varices. Figure 6 A, B, CT scans showing loss of contrast enhancement of the varices. Figure 7 Endoscopic view showing discharge of injected cyanoacrylate resulting from complete obliteration of the varices. Duodenal varices are rare and are caused by portal hypertension. 1 A few reports have described successful EUS-guided CA injection.2, 3 A higher success rate of hemostasis and a lower rate of rebleeding associated with CA injection have been reported in comparison with banding in cases of gastric varices. 4 One trial comparing CA injection with sclerotherapy showed that CA injection was associated with a higher obliteration rate of gastric varices. 5 Case reports have suggested the safety and efficacy of endoscopic CA injection for duodenal varices. However, endoscopic CA injection is not easy to perform because of the difficulty of maneuvering the endoscope inside the duodenum and of visualizing the varices during the bleeding. From these standpoints, EUS-guided intervention has the advantages of allowing the varices to be clearly visualized and of allowing evaluation after the therapy. Cyanoacrylate is a class of synthetic glue. It solidifies instantly after having contact with blood; as a result, the blood flow decreases and immediate hemostasis occurs in cases of acute bleeding. 6 Subsequently, owing to the decrease of blood flow, thrombosis occurs, obliterating the varix. A major adverse event of CA injection is organ embolism.7, 8 Reports have suggested an association between the risk of embolism and the amount of CA injected. 9 EUS enables confirmation of the injection needle entry into the varix and precise CA delivery into the varix in real time. 4 As a result, the amount of CA injected can be decreased. Most authors who report injecting CA under endoscopic guidance say that they mix CA with lipiodol to improve the visibility of CA under fluoroscopy. 6 However, mixing CA with lipiodol delays the solidification time and increases the possibility of embolization. 10 In our case, we injected undiluted CA to obtain instant solidification. Thus, EUS-guided CA injection was safe and effective for the control of bleeding duodenal varices. The use of this technique facilitates endoscopic management of duodenal varices. Disclosure All authors disclosed no financial relationships relevant to this publication.

A prospective, randomized trial of butyl cyanoacrylate injection versus band ligation in the management of bleeding gastric varices.

A randomized controlled trial of cyanoacrylate versus alcohol injection in patients with isolated fundic varices.

Rishi K. Jain,  Rajesh Gupta,  K. Sarin … (2002)
Treatment of bleeding gastric varices (GVs) is still controversial, mainly because of anecdotal studies or inclusion of patients with GVs located at different sites that have variable incidences of bleeding. A prospective study was undertaken to compare the efficacy and safety of GV sclerotherapy using alcohol and GV obturation using cyanoacrylate glue. Thirty-seven consecutive patients with portal hypertension and endoscopic evidence of isolated GVs, 17 presenting with histories of active bleeding, were randomized to receive endoscopic intervention either with alcohol (n = 17) or with cyanoacrylate glue (n = 20) injection. Variceal obliteration, rebleeding, or death was the endpoint. The glue was significantly more effective in achieving variceal obliteration than alcohol (100% vs 44%, p < 0.05). Furthermore, this could be achieved in a significantly shorter period (2.0 +/- 1.6 vs 4.7 +/- 3.2 wk, p < 0.05) and with a smaller volume of the agent. Cyanoacrylate glue injection could achieve arrest of acute GV bleeding more often than alcohol (89% vs 62%), and the need for rescue surgery was less; the difference was, however, not significant. Six patients died from uncontrolled GV bleeding, four being in the alcohol group. During a mean follow-up of 15.4 +/- 3.7 months there was no recurrence of GVs in either group. Our results show that cyanoacrylate is more effective and achieves GV obliteration faster than injection sclerotherapy with alcohol. It also appears to be more useful in controlling acute GV bleeding, with less of a need for rescue surgery.