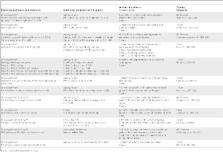 Stephen F Altschul,  Warren Gish,  Webb Miller … (1990)
A new approach to rapid sequence comparison, basic local alignment search tool (BLAST), directly approximates alignments that optimize a measure of local similarity, the maximal segment pair (MSP) score. Recent mathematical results on the stochastic properties of MSP scores allow an analysis of the performance of this method as well as the statistical significance of alignments it generates. The basic algorithm is simple and robust; it can be implemented in a number of ways and applied in a variety of contexts including straightforward DNA and protein sequence database searches, motif searches, gene identification searches, and in the analysis of multiple regions of similarity in long DNA sequences. In addition to its flexibility and tractability to mathematical analysis, BLAST is an order of magnitude faster than existing sequence comparison tools of comparable sensitivity.

Howard Balshem,  Mark Helfand,  Holger Schünemann … (2011)
This article introduces the approach of GRADE to rating quality of evidence. GRADE specifies four categories-high, moderate, low, and very low-that are applied to a body of evidence, not to individual studies. In the context of a systematic review, quality reflects our confidence that the estimates of the effect are correct. In the context of recommendations, quality reflects our confidence that the effect estimates are adequate to support a particular recommendation. Randomized trials begin as high-quality evidence, observational studies as low quality. "Quality" as used in GRADE means more than risk of bias and so may also be compromised by imprecision, inconsistency, indirectness of study results, and publication bias. In addition, several factors can increase our confidence in an estimate of effect. GRADE provides a systematic approach for considering and reporting each of these factors. GRADE separates the process of assessing quality of evidence from the process of making recommendations. Judgments about the strength of a recommendation depend on more than just the quality of evidence. Copyright © 2011 Elsevier Inc. All rights reserved.