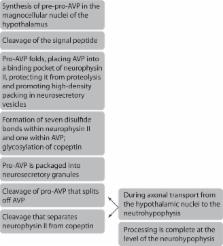 The need for faster diagnosis, more accurate prognostic assessment and treatment decisions in various diseases has lead to the investigations of new biomarkers. The hope is that this new biomarkers will enable early decision making in clinical practice. Arginine vasopressin (AVP) is one of the main hormones of the hypothalamic-pituitary-adrenal axis. Its main stimulus for secretion is hyperosmolarity, but AVP system is also stimulated by exposure of the body to endogenous stress. Reliable measurement of AVP concentration is difficult because it is subject to preanalytical and analytical errors. It is therefore not used in clinical practice. Copeptin, a 39-aminoacid glycopeptide, is a C-terminal part of the precursor pre-provasopressin (pre-proAVP). Activation of AVP system stimulates copeptin secretion into the circulation from the posterior pituitary gland in equimolar amounts with AVP. Therefore, copeptin directly reflects AVP concentration and can be used as surrogate biomarker of AVP secretion. Even mild to moderate stress situations contribute to release of copeptin. These reasons have lead to a handful of research on copeptin in various diseases. This review summarizes the current achievements in the research of copeptin as a diagnostic and prognostic marker and also discusses its association in different disease processes.

Incremental value of copeptin for rapid rule out of acute myocardial infarction.

Tobias Reichlin,  Willibald Hochholzer,  Claudia Stelzig … (2009)
The purpose of this study was to examine the incremental value of copeptin for rapid rule out of acute myocardial infarction (AMI). The rapid and reliable exclusion of AMI is a major unmet clinical need. Copeptin, the C-terminal part of the vasopressin prohormone, as a marker of acute endogenous stress may be useful in this setting. In 487 consecutive patients presenting to the emergency department with symptoms suggestive of AMI, we measured levels of copeptin at presentation, using a novel sandwich immunoluminometric assay in a blinded fashion. The final diagnosis was adjudicated by 2 independent cardiologists using all available data. The adjudicated final diagnosis was AMI in 81 patients (17%). Copeptin levels were significantly higher in AMI patients compared with those in patients having other diagnoses (median 20.8 pmol/l vs. 6.0 pmol/l, p < 0.001). The combination of troponin T and copeptin at initial presentation resulted in an area under the receiver-operating characteristic curve of 0.97 (95% confidence interval: 0.95 to 0.98), which was significantly higher than the 0.86 (95% confidence interval: 0.80 to 0.92) for troponin T alone (p < 0.001). A copeptin level <14 pmol/l in combination with a troponin T < or =0.01 microg/l correctly ruled out AMI with a sensitivity of 98.8% and a negative predictive value of 99.7%. The additional use of copeptin seems to allow a rapid and reliable rule out of AMI already at presentation and may thereby obviate the need for prolonged monitoring and serial blood sampling in the majority of patients. (Advantageous Predictors of Acute Coronary Syndromes Evaluation [APACE]; NCT00470587).

Copeptin, C-reactive protein, and procalcitonin as prognostic biomarkers in acute exacerbation of COPD.

Jörg Daniel Leuppi,  Nils Morgenthaler,  Christian Müller … (2007)
A novel approach to estimate the severity of COPD exacerbation and predict its outcome is the use of biomarkers. We assessed circulating levels of copeptin, the precursor of vasopressin, C-reactive protein (CRP), and procalcitonin as potential prognostic parameters for in-hospital and long-term outcomes in patients with acute exacerbation of COPD (AECOPD) requiring hospitalization. Data of 167 patients (mean age, 70 years; mean FEV(1), 39.9 +/- 16.9 of predicted [+/- SD]) presenting to the emergency department due to AECOPD were analyzed. Patients were evaluated based on clinical, laboratory, and lung function parameters on hospital admission, at 14 days, and at 6 months. Plasma levels of all three biomarkers were elevated during the acute exacerbation (p /= 40 pmol/L and a history of hospitalization (p < 0.0001). We suggest copeptin as a prognostic marker for short-term and long-term prognoses in patients with AECOPD requiring hospitalization.

Nils Morgenthaler,  Joachim Struck,  Susan E. Davies … (2007)
The role of the vasopressin system after acute myocardial infarction is unclear. Copeptin, the C-terminal part of the vasopressin prohormone, is secreted stoichiometrically with vasopressin. We compared the prognostic value of copeptin and an established marker, N-terminal pro-B-type natriuretic peptide (NTproBNP), after acute myocardial infarction. In this prospective single-hospital study, we recruited 980 consecutive post-acute myocardial infarction patients (718 men, median [range] age 66 [24 to 95] years), with follow-up over 342 (range 0 to 764) days. Plasma copeptin was highest on admission (n=132, P<0.001, day 1 versus days 2 to 5) and reached a plateau at days 3 to 5. In the 980 patients, copeptin (measured at days 3 to 5) was elevated in patients who died (n=101) or were readmitted with heart failure (n=49) compared with survivors (median [range] 18.5 [0.6 to 441.0] versus 6.5 [0.3 to 267.0] pmol/L, P<0.0005). With logistic regression analysis, copeptin (odds ratio, 4.14, P<0.0005) and NTproBNP (odds ratio, 2.26, P<0.003) were significant independent predictors of death or heart failure at 60 days. The area under the receiver operating characteristic curves for copeptin (0.75) and NTproBNP (0.76) were similar. The logistic model with both markers yielded a larger area under the curve (0.84) than for NTproBNP (P<0.013) or copeptin (P<0.003) alone, respectively. Cox modeling predicted death or heart failure with both biomarkers (log copeptin [hazard ratio, 2.33], log NTproBNP [hazard ratio, 2.70]). In patients stratified by NTproBNP (above the median of approximately 900 pmol/L), copeptin above the median (approximately 7 pmol/L) was associated with poorer outcome (P<0.0005). Findings were similar for death and heart failure as individual end points. The vasopressin system is activated after acute myocardial infarction. Copeptin may predict adverse outcome, especially in those with an elevated NTproBNP (more than approximately 900 pmol/L).