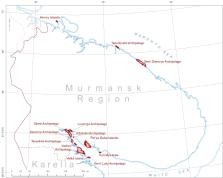 The present-day demand for digital availability of distributional data in biodiversity studies requires a special effort in assembling and editing the data otherwise scattered in paper literature and herbarium collections, which can be poorly accessible or little understood to present-day users and especially automatic data processors. Our project on developing the information resource for the vascular plant flora of Murmansk Region, Russia, includes processing and making digitally available all the data on the taxonomy and distribution of this flora. So far, published distribution maps are limited to the old set in the Flora of Murmansk Region (published in 1953–1966) and the Red Data Book of Murmansk Region (ed. 2, published in 2014). These publications did not take into account the main part of the herbarium collections kept at the Kandalaksha Strict Nature Reserve, which are the basis for numerous local publications that appear scattered and, therefore, little accessible nowadays.

We present a complete dataset of all holdings of vascular plants in the Herbarium of the Kandalaksha Strict Nature Reserve, totalling 10,218 specimens collected during 1947–2019, which are referable to 764 species and 19 subspecies. All specimens were georeferenced with the utmost precision available. This dataset offers a complete and dense coverage of the Nature Reserve's territory (islands and adjacent mainland coastal areas of the Barents and White Seas, Murmansk Region and Republic of Karelia, Russia); these data are little represented in herbarium collections elsewhere.

Why vouchers matter in botanical research1

Theresa M. Culley (2013)
What is a voucher and why is it important in research? As a preserved specimen of an identified taxon deposited in a permanent and accessible storage facility, the voucher serves as the supporting material for published studies of the taxon and ensures that the science is repeatable. Vouchers are crucial in authenticating the taxonomy of an organism, as a tool for identifying localities of the taxon, and for additional taxonomic, genetic, ecological, and/or environmental research.

A grid-based map for the Biogeographical Regions of Europe