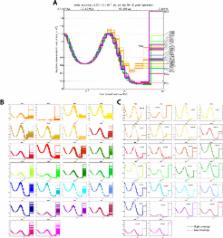 The 1000 Genomes Project set out to provide a comprehensive description of common human genetic variation by applying whole-genome sequencing to a diverse set of individuals from multiple populations. Here we report completion of the project, having reconstructed the genomes of 2,504 individuals from 26 populations using a combination of low-coverage whole-genome sequencing, deep exome sequencing, and dense microarray genotyping. We characterized a broad spectrum of genetic variation, in total over 88 million variants (84.7 million single nucleotide polymorphisms (SNPs), 3.6 million short insertions/deletions (indels), and 60,000 structural variants), all phased onto high-quality haplotypes. This resource includes >99% of SNP variants with a frequency of >1% for a variety of ancestries. We describe the distribution of genetic variation across the global sample, and discuss the implications for common disease studies.

John Novembre,  Kenneth Lange,  William H. Alexander (2009)
Population stratification has long been recognized as a confounding factor in genetic association studies. Estimated ancestries, derived from multi-locus genotype data, can be used to perform a statistical correction for population stratification. One popular technique for estimation of ancestry is the model-based approach embodied by the widely applied program structure. Another approach, implemented in the program EIGENSTRAT, relies on Principal Component Analysis rather than model-based estimation and does not directly deliver admixture fractions. EIGENSTRAT has gained in popularity in part owing to its remarkable speed in comparison to structure. We present a new algorithm and a program, ADMIXTURE, for model-based estimation of ancestry in unrelated individuals. ADMIXTURE adopts the likelihood model embedded in structure. However, ADMIXTURE runs considerably faster, solving problems in minutes that take structure hours. In many of our experiments, we have found that ADMIXTURE is almost as fast as EIGENSTRAT. The runtime improvements of ADMIXTURE rely on a fast block relaxation scheme using sequential quadratic programming for block updates, coupled with a novel quasi-Newton acceleration of convergence. Our algorithm also runs faster and with greater accuracy than the implementation of an Expectation-Maximization (EM) algorithm incorporated in the program FRAPPE. Our simulations show that ADMIXTURE's maximum likelihood estimates of the underlying admixture coefficients and ancestral allele frequencies are as accurate as structure's Bayesian estimates. On real-world data sets, ADMIXTURE's estimates are directly comparable to those from structure and EIGENSTRAT. Taken together, our results show that ADMIXTURE's computational speed opens up the possibility of using a much larger set of markers in model-based ancestry estimation and that its estimates are suitable for use in correcting for population stratification in association studies.

Carlo Sidore,  Yu Wang,  Lachlan Coin (2012)
Summary Through characterising the geographic and functional spectrum of human genetic variation, the 1000 Genomes Project aims to build a resource to help understand the genetic contribution to disease. We describe the genomes of 1,092 individuals from 14 populations, constructed using a combination of low-coverage whole-genome and exome sequencing. By developing methodologies to integrate information across multiple algorithms and diverse data sources we provide a validated haplotype map of 38 million SNPs, 1.4 million indels and over 14 thousand larger deletions. We show that individuals from different populations carry different profiles of rare and common variants and that low-frequency variants show substantial geographic differentiation, which is further increased by the action of purifying selection. We show that evolutionary conservation and coding consequence are key determinants of the strength of purifying selection, that rare-variant load varies substantially across biological pathways and that each individual harbours hundreds of rare non-coding variants at conserved sites, such as transcription-factor-motif disrupting changes. This resource, which captures up to 98% of accessible SNPs at a frequency of 1% in populations of medical genetics focus, enables analysis of common and low-frequency variants in individuals from diverse, including admixed, populations.

Lists of participants and their affiliations appear in the online version of the paper.