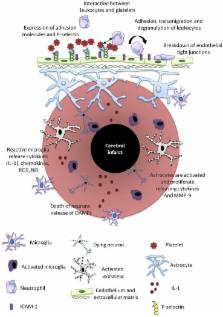 Inflammation is the key host-defense response to infection and injury, yet also a major contributor to a diverse range of diseases, both peripheral and central in origin. Brain injury as a result of stroke or trauma is a leading cause of death and disability worldwide, yet there are no effective treatments, resulting in enormous social and economic costs. Increasing evidence, both preclinical and clinical, highlights inflammation as an important factor in stroke, both in determining outcome and as a contributor to risk. A number of inflammatory mediators have been proposed as key targets for intervention to reduce the burden of stroke, several reaching clinical trial, but as yet yielding no success. Many factors could explain these failures, including the lack of robust preclinical evidence and poorly designed clinical trials, in addition to the complex nature of the clinical condition. Lack of consideration in preclinical studies of associated co-morbidities prevalent in the clinical stroke population is now seen as an important omission in previous work. These co-morbidities (atherosclerosis, hypertension, diabetes, infection) have a strong inflammatory component, supporting the need for greater understanding of how inflammation contributes to acute brain injury. Interleukin (IL)-1 is the prototypical pro-inflammatory cytokine, first identified many years ago as the endogenous pyrogen. Research over the last 20 years or so reveals that IL-1 is an important mediator of neuronal injury and blocking the actions of IL-1 is beneficial in a number of experimental models of brain damage. Mechanisms underlying the actions of IL-1 in brain injury remain unclear, though increasing evidence indicates the cerebrovasculature as a key target. Recent literature supporting this and other aspects of how IL-1 and systemic inflammation in general contribute to acute brain injury are discussed in this review.

Generation of neurons and astrocytes from isolated cells of the adult mammalian central nervous system.

Kyle B. Reynolds, Thomas S. Weiss (1992)
Neurogenesis in the mammalian central nervous system is believed to end in the period just after birth; in the mouse striatum no new neurons are produced after the first few days after birth. In this study, cells isolated from the striatum of the adult mouse brain were induced to proliferate in vitro by epidermal growth factor. The proliferating cells initially expressed nestin, an intermediate filament found in neuroepithelial stem cells, and subsequently developed the morphology and antigenic properties of neurons and astrocytes. Newly generated cells with neuronal morphology were immunoreactive for gamma-aminobutyric acid and substance P, two neurotransmitters of the adult striatum in vivo. Thus, cells of the adult mouse striatum have the capacity to divide and differentiate into neurons and astrocytes.

Neuronal replacement from endogenous precursors in the adult brain after stroke.

Andreas Arvidsson, Tove Collin, Deniz Kirik … (2002)
In the adult brain, new neurons are continuously generated in the subventricular zone and dentate gyrus, but it is unknown whether these neurons can replace those lost following damage or disease. Here we show that stroke, caused by transient middle cerebral artery occlusion in adult rats, leads to a marked increase of cell proliferation in the subventricular zone. Stroke-generated new neurons, as well as neuroblasts probably already formed before the insult, migrate into the severely damaged area of the striatum, where they express markers of developing and mature, striatal medium-sized spiny neurons. Thus, stroke induces differentiation of new neurons into the phenotype of most of the neurons destroyed by the ischemic lesion. Here we show that the adult brain has the capacity for self-repair after insults causing extensive neuronal death. If the new neurons are functional and their formation can be stimulated, a novel therapeutic strategy might be developed for stroke in humans.

This article was submitted to the journal Frontiers in Cellular Neuroscience.