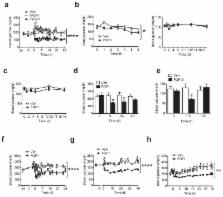 Type 2 diabetes (T2D) is among the most common and costly disorders worldwide 1 . The goal of current medical management of T2D is to transiently ameliorate hyperglycemia through daily dosing of one or more anti-diabetic drugs. Hypoglycemia and weight are common side effects of therapy, and sustained disease remission is not obtainable with non-surgical approaches. Based on the potent glucose-lowering response elicited by activation of brain fibroblast growth factor (FGF) receptors 2– 4 , we explored the anti-diabetic efficacy of centrally administered FGF1, which, unlike other FGF peptides, activates all FGF receptor subtypes 5 . We report that a single intracerebroventricular (i.c.v.) injection of FGF1 at a dose one-tenth of that needed for systemic anti-diabetic efficacy induces sustained diabetes remission in both mouse and rat models of T2D. This anti-diabetic effect is not secondary to weight loss, does not increase the risk of hypoglycemia, and involves a novel and incompletely understood mechanism for increasing glucose clearance from the bloodstream. We conclude that the brain has the inherent potential to induce diabetes remission and that brain FGF receptors are potential pharmacological targets for achieving this goal.

Recovery of learning and memory is associated with chromatin remodelling.

André Fischer,  Matthew Dobbin,  Jia-Huei Tsai … (2007)
Neurodegenerative diseases of the central nervous system are often associated with impaired learning and memory, eventually leading to dementia. An important aspect in pre-clinical research is the exploration of strategies to re-establish learning ability and access to long-term memories. By using a mouse model that allows temporally and spatially restricted induction of neuronal loss, we show here that environmental enrichment reinstated learning behaviour and re-established access to long-term memories after significant brain atrophy and neuronal loss had already occurred. Environmental enrichment correlated with chromatin modifications (increased histone-tail acetylation). Moreover, increased histone acetylation by inhibitors of histone deacetylases induced sprouting of dendrites, an increased number of synapses, and reinstated learning behaviour and access to long-term memories. These data suggest that inhibition of histone deacetylases might be a suitable therapeutic avenue for neurodegenerative diseases associated with learning and memory impairment, and raises the possibility of recovery of long-term memories in patients with dementia.

M. John,  X. Yu,  Barbara Moffat … (2004)
Hormonal control of metabolic rate can be important in regulating the imbalance between energy intake and expenditure that underlies the development of obesity. In mice fed a high-fat diet, human fibroblast growth factor 19 (FGF19) increased metabolic rate [1.53 +/- 0.06 liters O(2)/h.kg(0.75) (vehicle) vs. 1.93 +/- 0.05 liters O(2)/h.kg(0.75) (FGF19); P < 0.001] and decreased respiratory quotient [0.82 +/- 0.01 (vehicle) vs. 0.80 +/- 0.01 (FGF19); P < 0.05]. In contrast to the vehicle-treated mice that gained weight (0.14 +/- 0.05 g/mouse.d), FGF19-treated mice lost weight (-0.13 +/- 0.03 g/mouse.d; P < 0.001) without a significant change in food intake. Furthermore, in addition to a reduction in weight gain, treatment with FGF19 prevented or reversed the diabetes that develops in mice made obese by genetic ablation of brown adipose tissue or genetic absence of leptin. To explore the mechanisms underlying the FGF19-mediated increase in metabolic rate, we profiled the FGF19-induced gene expression changes in the liver and brown fat. In brown adipose tissue, chronic exposure to FGF19 led to a gene expression profile that is consistent with activation of this tissue. We also found that FGF19 acutely increased liver expression of the leptin receptor (1.8-fold; P < 0.05) and decreased the expression of acetyl coenzyme A carboxylase 2 (0.6-fold; P < 0.05). The gene expression changes were consistent with the experimentally determined increase in fat oxidation and decrease in liver triglycerides. Thus, FGF19 is able to increase metabolic rate concurrently with an increase in fatty acid oxidation.

Narumol Chinookoswong,  Richard Lindberg,  Melissa Graham … (2009)
Recombinant fibroblast growth factor (FGF)21 has antihyperglycemic, antihyperlipidemic, and antiobesity effects in diabetic rodent and monkey models. Previous studies were confined to measuring steady-state effects of FGF21 following subchronic or chronic administration. The present study focuses on the kinetics of biological actions of FGF21 following a single injection and on the associated physiological and cellular mechanisms underlying FGF21 actions. We show that FGF21 resulted in rapid decline of blood glucose levels and immediate improvement of glucose tolerance and insulin sensitivity in two animal models of insulin resistance (ob/ob and DIO mice). In ob/ob mice, FGF21 led to a 40-60% decrease in blood glucose, insulin, and amylin levels within 1 h after injection, and the maximal effects were sustained for more than 6 h despite the 1- to 2-h half-life of FGF21. In DIO mice, FGF21 reduced fasting blood glucose and insulin levels and improved glucose tolerance and insulin sensitivity within 3 h of treatment. The acute improvement of glucose metabolism was associated with a 30% reduction of hepatic glucose production and an increase in peripheral glucose turnover. FGF21 appeared to have no direct effect on ex vivo pancreatic islet insulin or glucagon secretion. However, it rapidly induced typical FGF signaling in liver and adipose tissues and in several hepatoma-derived cell lines and differentiated adipocytes. FGF21 was able to inhibit glucose release from H4IIE hepatoma cells and stimulate glucose uptake in 3T3-L1 adipocytes. We conclude that the acute glucose-lowering and insulin-sensitizing effects of FGF21 are potentially associated with its metabolic actions in liver and adipose tissues.

Reprints and permissions information is available at www.nature.com/reprints