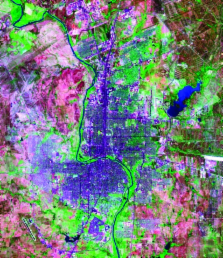 Urban dengue is common in most countries of the Americas, but has been rare in the United States for more than half a century. In 1999 we investigated an outbreak of the disease that affected Nuevo Laredo, Tamaulipas, Mexico, and Laredo, Texas, United States, contiguous cities that straddle the international border. The incidence of recent cases, indicated by immunoglobulin M antibody serosurvey, was higher in Nuevo Laredo, although the vector, Aedes aegypti, was more abundant in Laredo. Environmental factors that affect contact with mosquitoes, such as air-conditioning and human behavior, appear to account for this paradox. We conclude that the low prevalence of dengue in the United States is primarily due to economic, rather than climatic, factors.

J C Edman,  L Lorenz,  Alanna C. Morrison … (1999)
We used a histologic technique to study multiple blood feeding in a single gonotrophic cycle by engorged Aedes aegypti (L.) that were collected weekly for 2 yr from houses in a rural village in Thailand (n = 1,891) and a residential section of San Juan, Puerto Rico (n = 1,675). Overall, mosquitoes from Thailand contained significantly more multiple meals (n = 1,300, 42% double meals, 5% triple meals) than mosquitoes collected in Puerto Rico (n = 1,156, 32% double meals, 2% triple meals). The portion of specimens for which frequency of feeding could not be determined was 31% at both sites. We estimated that on average Ae. aegypti take 0.76 and 0.63 human blood meals per day in Thailand and Puerto Rico, respectively. However, frequency of multiple feeding varied among houses and, in Puerto Rico, the neighborhoods from which mosquitoes were collected. In Thailand 65% of the mosquitoes fed twice on the same day, whereas in Puerto Rico 57% took multiple meals separated by > or = 1 d. At both sites, the majority of engorged specimens were collected inside houses (Thailand 86%, Puerto Rico 95%). The number of blood meals detected was independent of where mosquitoes were collected (inside versus outside of the house) at both sites and the time of day collections were made in Puerto Rico. Feeding rates were slightly higher for mosquitoes collected in the afternoon in Thailand. Temperatures were significantly higher and mosquitoes significantly smaller in Thailand than in Puerto Rico. At both sites female size was negatively associated with temperature. Rates of multiple feeding were associated positively with temperature and negatively with mosquito size in Thailand, but not in Puerto Rico. Multiple feeding during a single gonotrophic cycle is a regular part of Ae. aegypti biology, can vary geographically and under different climate conditions, and may be associated with variation in patterns of dengue virus transmission.

Potential changes in the distribution of dengue transmission under climate warming.

Theo Jetten,  D A Focks (1997)
The purpose of the present paper is to document an initial attempt to quantify the influence of warming temperatures on the intensity and distribution of dengue transmission throughout the world using an expression of vectorial capacity modified to reflect the role of temperature on development and survival of the vector and virus. We rearranged the traditional vectorial capacity expression (the mean number of potentially infective contacts made by a mosquito population per infectious person per unit time) to develop an equation for the critical density threshold, an estimate of the number of adult female vectors required to just maintain the virus in a susceptible human population. In this expression, temperature influences adult survival, the lengths of the gonotrophic cycle and the extrinsic incubation period of the virus in the vector, and vector size, a factor that indirectly influences the biting rate. Before making projections for warming scenarios of current climate plus 2 or 4 degrees C, we validate our technique by successfully comparing model projections and the observed spatial, temporal, and altitudinal distribution of dengue using current climate in five cities that are endemic or have had epidemics in the past. Our results indicate that the current warming projection of the International Council of Scientific Unions and the Intergovernmental Panel on Climate Change of 2 degrees C by the end of the next century can be expected to result in a potential increase in the latitudinal and altitudinal range of dengue; the potential duration of the transmission season will also increase in temperate locations as well. We discuss how an increase in temperature-related transmission intensity can be expected to lower the average ages of primary and secondary infections and thereby significantly increase the proportion of secondary infections occurring among infants and adolescents, the ages especially susceptible to dengue hemorrhagic fever and shock syndrome.

J A Patz,  W. Martens,  D A Focks … (1998)
Climate factors influence the transmission of dengue fever, the world's most widespread vector-borne virus. We examined the potential added risk posed by global climate change on dengue transmission using computer-based simulation analysis to link temperature output from three climate general circulation models (GCMs) to a dengue vectorial capacity equation. Our outcome measure, epidemic potential, is the reciprocal of the critical mosquito density threshold of the vectorial capacity equation. An increase in epidemic potential indicates that a smaller number of mosquitoes can maintain a state of endemicity of disease where dengue virus is introduced. Baseline climate data for comparison are from 1931 to 1980. Among the three GCMs, the average projected temperature elevation was 1.16 degrees C, expected by the year 2050. All three GCMs projected a temperature-related increase in potential seasonal transmission in five selected cities, as well as an increase in global epidemic potential, with the largest area change occurring in temperate regions. For regions already at risk, the aggregate epidemic potential across the three scenarios rose on average between 31 and 47% (range, 24-74%). If climate change occurs, as many climatologists believe, this will increase the epidemic potential of dengue-carrying mosquitoes, given viral introduction and susceptible human populations. Our risk assessment suggests that increased incidence may first occur in regions bordering endemic zones in latitude or altitude. Endemic locations may be at higher risk from hemorrhagic dengue if transmission intensity increases. Images Figure 1 Figure 2 Figure 3