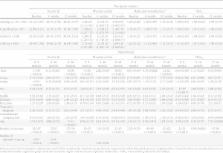 The PHQ-9: validity of a brief depression severity measure.

Austin Spitzer,  K Kroenke,  A Spitzer … (2001)
While considerable attention has focused on improving the detection of depression, assessment of severity is also important in guiding treatment decisions. Therefore, we examined the validity of a brief, new measure of depression severity. The Patient Health Questionnaire (PHQ) is a self-administered version of the PRIME-MD diagnostic instrument for common mental disorders. The PHQ-9 is the depression module, which scores each of the 9 DSM-IV criteria as "0" (not at all) to "3" (nearly every day). The PHQ-9 was completed by 6,000 patients in 8 primary care clinics and 7 obstetrics-gynecology clinics. Construct validity was assessed using the 20-item Short-Form General Health Survey, self-reported sick days and clinic visits, and symptom-related difficulty. Criterion validity was assessed against an independent structured mental health professional (MHP) interview in a sample of 580 patients. As PHQ-9 depression severity increased, there was a substantial decrease in functional status on all 6 SF-20 subscales. Also, symptom-related difficulty, sick days, and health care utilization increased. Using the MHP reinterview as the criterion standard, a PHQ-9 score > or =10 had a sensitivity of 88% and a specificity of 88% for major depression. PHQ-9 scores of 5, 10, 15, and 20 represented mild, moderate, moderately severe, and severe depression, respectively. Results were similar in the primary care and obstetrics-gynecology samples. In addition to making criteria-based diagnoses of depressive disorders, the PHQ-9 is also a reliable and valid measure of depression severity. These characteristics plus its brevity make the PHQ-9 a useful clinical and research tool.

The summary of diabetes self-care activities measure: results from 7 studies and a revised scale.

Russell E. Glasgow,  S. Hampson,  D Toobert (2000)
To review reliability, validity, and normative data from 7 different studies, involving a total of 1,988 people with diabetes, and provide a revised version of the Summary of Diabetes Self-Care Activities (SDSCA) measure. The SDSCA measure is a brief self-report questionnaire of diabetes self-management that includes items assessing the following aspects of the diabetes regimen: general diet, specific diet, exercise, blood-glucose testing, foot care, and smoking. Normative data (means and SD), inter-item and test-retest reliability, correlations between the SDSCA subscales and a range of criterion measures, and sensitivity to change scores are presented for the 7 different studies (5 randomized interventions and 2 observational studies). Participants were typically older patients, having type 2 diabetes for a number of years, with a slight preponderance of women. The average inter-item correlations within scales were high (mean = 0.47), with the exception of specific diet; test-retest correlations were moderate (mean = 0.40). Correlations with other measures of diet and exercise generally supported the validity of the SDSCA subscales (mean = 0.23). There are numerous benefits from standardization of measures across studies. The SDSCA questionnaire is a brief yet reliable and valid self-report measure of diabetes self-management that is useful both for research and practice. The revised version and its scoring are presented, and the inclusion of this measure in studies of diabetes self-management is recommended when appropriate.

Improving the reporting of pragmatic trials: an extension of the CONSORT statement