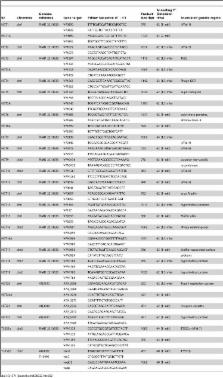 Vibrio parahaemolyticus is a foodborne pathogen that has become a public health concern at the global scale. The epidemiological significance of V. parahaemolyticus infections in Latin America received little attention until the winter of 1997 when cases related to the pandemic clone were detected in the region, changing the epidemic dynamics of this pathogen in Peru. With the aim to assess the impact of the arrival of the pandemic clone on local populations of pathogenic V. parahaemolyticus in Peru, we investigated the population genetics and genomic variation in a complete collection of non-pandemic strains recovered from clinical sources in Peru during the pre- and post-emergence periods of the pandemic clone. A total of 56 clinical strains isolated in Peru during the period 1994 to 2007, 13 strains from Chile and 20 strains from Asia were characterized by Multilocus Sequence Typing (MLST) and checked for the presence of Variable Genomic Regions (VGRs). The emergence of O3:K6 cases in Peru implied a drastic disruption of the seasonal dynamics of infections and a shift in the serotype dominance of pathogenic V. parahaemolyticus. After the arrival of the pandemic clone, a great diversity of serovars not previously reported was detected in the country, which supports the introduction of additional populations cohabitating with the pandemic group. Moreover, the presence of genomic regions characteristic of the pandemic clone in other non-pandemic strains may represent early evidence of genetic transfer from the introduced population to the local communities. Finally, the results of this study stress the importance of population admixture, horizontal genetic transfer and homologous recombination as major events shaping the structure and diversity of pathogenic V. parahaemolyticus.

Infections caused by Vibrio parahaemolyticus have increased significantly over the last two decades, with cases now regularly reported globally. The emergence of cholera at global scale has brought the attention toward other Vibrio diseases in developing countries. This was the situation in Peru, where the investigation of V. cholerae in hospitals and regional public health laboratories after the dramatic emergence of cholera epidemic in 1991 enabled the identification of other pathogenic Vibrio throughout the whole country. The submission of all these bacteria to the Instituto Nacional de Salud (INS, Lima, Peru) for characterization generated an extraordinary repository of records and isolates which have been decisive for sizing the impact of V. parahaemolyticus infections on the population. The present study addresses, for first time, the impact of the arrival of a non-endemic population of V. parahaemolyticus on the genetic structure and virulence attributes of local populations. The detection of the pandemic clone of V. parahaemolyticus to Peru in 1997 changed not only the epidemic dynamics of this pathogen, but also the population structure and genetic variation of native populations through population admixture, horizontal genetic transfer and homologous recombination between native and introduced populations of pathogenic V. parahaemolyticus.

E Feil,  B. C. Li,  D M Aanensen … (2004)
The introduction of multilocus sequence typing (MLST) for the precise characterization of isolates of bacterial pathogens has had a marked impact on both routine epidemiological surveillance and microbial population biology. In both fields, a key prerequisite for exploiting this resource is the ability to discern the relatedness and patterns of evolutionary descent among isolates with similar genotypes. Traditional clustering techniques, such as dendrograms, provide a very poor representation of recent evolutionary events, as they attempt to reconstruct relationships in the absence of a realistic model of the way in which bacterial clones emerge and diversify to form clonal complexes. An increasingly popular approach, called BURST, has been used as an alternative, but present implementations are unable to cope with very large data sets and offer crude graphical outputs. Here we present a new implementation of this algorithm, eBURST, which divides an MLST data set of any size into groups of related isolates and clonal complexes, predicts the founding (ancestral) genotype of each clonal complex, and computes the bootstrap support for the assignment. The most parsimonious patterns of descent of all isolates in each clonal complex from the predicted founder(s) are then displayed. The advantages of eBURST for exploring patterns of evolutionary descent are demonstrated with a number of examples, including the simple Spain(23F)-1 clonal complex of Streptococcus pneumoniae, "population snapshots" of the entire S. pneumoniae and Staphylococcus aureus MLST databases, and the more complicated clonal complexes observed for Campylobacter jejuni and Neisseria meningitidis.

Xavier Didelot,  Rory Bowden,  Daniel J Wilson … (2012)
Whole-genome sequencing of bacteria has recently emerged as a cost-effective and convenient approach for addressing many microbiological questions. Here, we review the current status of clinical microbiology and how it has already begun to be transformed by using next-generation sequencing. We focus on three essential tasks: identifying the species of an isolate, testing its properties, such as resistance to antibiotics and virulence, and monitoring the emergence and spread of bacterial pathogens. We predict that the application of next-generation sequencing will soon be sufficiently fast, accurate and cheap to be used in routine clinical microbiology practice, where it could replace many complex current techniques with a single, more efficient workflow.

A comparison of homologous recombination rates in bacteria and archaea.

Xavier Didelot,  Michiel Vos (2009)
It is a standard practice to test for the signature of homologous recombination in studies examining the genetic diversity of bacterial populations. Although it has emerged that homologous recombination rates can vary widely between species, comparing the results from different studies is made difficult by the diversity of estimation methods used. Here, Multi Locus Sequence Typing (MLST) datasets from a wide variety of bacteria and archaea are analyzed using the ClonalFrame method. This enables a direct comparison between species and allows for a first exploration of the question whether phylogeny or ecology is the primary determinant of homologous recombination rate.

This work was partially supported by project 2007/CP381 from the Department for International Cooperation of the Regional Government of Galicia, Spain. This project finished in 2008. The funders had no role in study design, data collection and analysis, decision to publish, or preparation of the manuscript.