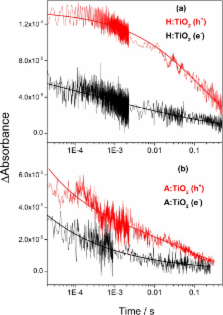 Journal: The Journal of Physical Chemistry. C, Nanomaterials and Interfaces 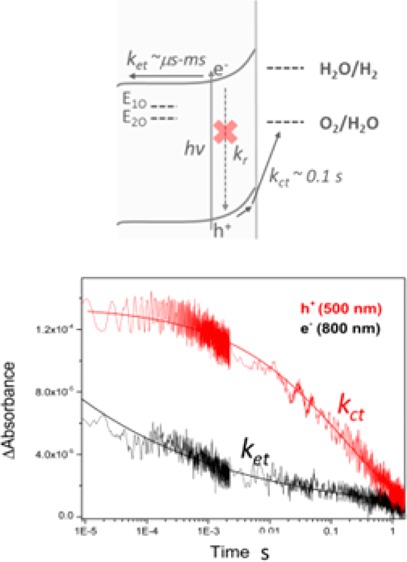 There is an increasing level of interest in the use of black TiO 2 prepared by thermal hydrogen treatments (H:TiO 2) due to the potential to enhance both the photocatalytic and the light-harvesting properties of TiO 2. Here, we examine oxygen-deficient H:TiO 2 nanotube arrays that have previously achieved very high solar-to-hydrogen (STH) efficiencies due to incident photon-to-current efficiency (IPCE) values of >90% for photoelectrochemical water splitting at only 0.4 V vs RHE under UV illumination. Our transient absorption (TA) mechanistic study provides strong evidence that the improved electrical properties of oxygen-deficient TiO 2 enables remarkably efficient spatial separation of electron–hole pairs on the submicrosecond time scale at moderate applied bias, and this coupled to effective suppression of microsecond to seconds charge carrier recombination is the primary factor behind the dramatically improved photoelectrochemical activity.

Electrochemical photolysis of water at a semiconductor electrode.

Thomas Mallouk,  Kazuhiko Maeda,  S Lee … (2009)
Researchers are intensively investigating photochemical water splitting as a means of converting solar to chemical energy in the form of fuels. Hydrogen is a key solar fuel because it can be used directly in combustion engines or fuel cells, or combined catalytically with CO(2) to make carbon containing fuels. Different approaches to solar water splitting include semiconductor particles as photocatalysts and photoelectrodes, molecular donor-acceptor systems linked to catalysts for hydrogen and oxygen evolution, and photovoltaic cells coupled directly or indirectly to electrocatalysts. Despite several decades of research, solar hydrogen generation is efficient only in systems that use expensive photovoltaic cells to power water electrolysis. Direct photocatalytic water splitting is a challenging problem because the reaction is thermodynamically uphill. Light absorption results in the formation of energetic charge-separated states in both molecular donor-acceptor systems and semiconductor particles. Unfortunately, energetically favorable charge recombination reactions tend to be much faster than the slow multielectron processes of water oxidation and reduction. Consequently, visible light water splitting has only recently been achieved in semiconductor-based photocatalytic systems and remains an inefficient process. This Account describes our approach to two problems in solar water splitting: the organization of molecules into assemblies that promote long-lived charge separation, and catalysis of the electrolysis reactions, in particular the four-electron oxidation of water. The building blocks of our artificial photosynthetic systems are wide band gap semiconductor particles, photosensitizer and electron relay molecules, and nanoparticle catalysts. We intercalate layered metal oxide semiconductors with metal nanoparticles. These intercalation compounds, when sensitized with [Ru(bpy)(3)](2+) derivatives, catalyze the photoproduction of hydrogen from sacrificial electron donors (EDTA(2-)) or non-sacrificial donors (I(-)). Through exfoliation of layered metal oxide semiconductors, we construct multilayer electron donor-acceptor thin films or sensitized colloids in which individual nanosheets mediate light-driven electron transfer reactions. When sensitizer molecules are "wired" to IrO(2).nH(2)O nanoparticles, a dye-sensitized TiO(2) electrode becomes the photoanode of a water-splitting photoelectrochemical cell. Although this system is an interesting proof-of-concept, the performance of these cells is still poor (approximately 1% quantum yield) and the dye photodegrades rapidly. We can understand the quantum efficiency and degradation in terms of competing kinetic pathways for water oxidation, back electron transfer, and decomposition of the oxidized dye molecules. Laser flash photolysis experiments allow us to measure these competing rates and, in principle, to improve the performance of the cell by changing the architecture of the electron transfer chain.

Min Yang,  X. Pan,  Yi Xu … (2013)
Titanium dioxide (TiO2), as an important semiconductor metal oxide, has been widely investigated in the field of photocatalysis. The properties of TiO2, including its light absorption, charge transport and surface adsorption, are closely related to its defect disorder, which in turn plays a significant role in the photocatalytic performance of TiO2. Among all the defects identified in TiO2, oxygen vacancy is one of the most important and is supposed to be the prevalent defect in many metal oxides, which has been widely investigated both by theoretical calculations and experimental characterizations. Here, we give a short review on the existing strategies for the synthesis of defective TiO2 with oxygen vacancies, and the defect related properties of TiO2 including structural, electronic, optical, dissociative adsorption and reductive properties, which are intimately related to the photocatalytic performance of TiO2. In particular, photocatalytic applications with regard to defective TiO2 are outlined. In addition, we offer some perspectives on the challenge and new direction for future research in this field. We hope that this tutorial minireview would provide some useful contribution to the future design and fabrication of defective semiconductor-based nanomaterials for diverse photocatalytic applications.