Understanding the Key to Targeting the IGF Axis in Cancer: A Biomarker Assessment 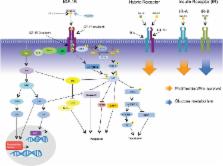 Type 1 insulin like growth factor receptor (IGF-1R) targeted therapies showed compelling pre-clinical evidence; however, to date, this has failed to translate into patient benefit in Phase 2/3 trials in unselected patients. This was further complicated by the toxicity, including hyperglycemia, which largely results from the overlap between IGF and insulin signaling systems and associated feedback mechanisms. This has halted the clinical development of inhibitors targeting IGF signaling, which has limited the availability of biopsy samples for correlative studies to understand biomarkers of response. Indeed, a major factor contributing to lack of clinical benefit of IGF targeting agents has been difficulty in identifying patients with tumors driven by IGF signaling due to the lack of predictive biomarkers. In this review, we will describe the IGF system, rationale for targeting IGF signaling, the potential liabilities of targeting strategies, and potential biomarkers that may improve success.

Sphingosine-1-phosphate signaling and its role in disease.

Michael Maceyka,  Kuzhuvelil B. Harikumar,  Sheldon Milstien … (2012)
The bioactive sphingolipid metabolite sphingosine-1-phosphate (S1P) is now recognized as a critical regulator of many physiological and pathophysiological processes, including cancer, atherosclerosis, diabetes and osteoporosis. S1P is produced in cells by two sphingosine kinase isoenzymes, SphK1 and SphK2. Many cells secrete S1P, which can then act in an autocrine or paracrine manner. Most of the known actions of S1P are mediated by a family of five specific G protein-coupled receptors. More recently, it was shown that S1P also has important intracellular targets involved in inflammation, cancer and Alzheimer's disease. This suggests that S1P actions are much more complex than previously thought, with important ramifications for development of therapeutics. This review highlights recent advances in our understanding of the mechanisms of action of S1P and its roles in disease. Copyright © 2011 Elsevier Ltd. All rights reserved.

P Scalia,  Giuseppe Pandini,  Francesco Frasca … (1999)
Insulin-like growth factor II (IGF-II) is a peptide growth factor that is homologous to both insulin-like growth factor I (IGF-I) and insulin and plays an important role in embryonic development and carcinogenesis. IGF-II is believed to mediate its cellular signaling via the transmembrane tyrosine kinase type 1 insulin-like growth factor receptor (IGF-I-R), which is also the receptor for IGF-I. Earlier studies with both cultured cells and transgenic mice, however, have suggested that in the embryo the insulin receptor (IR) may also be a receptor for IGF-II. In most cells and tissues, IR binds IGF-II with relatively low affinity. The IR is expressed in two isoforms (IR-A and IR-B) differing by 12 amino acids due to the alternative splicing of exon 11. In the present study we found that IR-A but not IR-B bound IGF-II with an affinity close to that of insulin. Moreover, IGF-II bound to IR-A with an affinity equal to that of IGF-II binding to the IGF-I-R. Activation of IR-A by insulin led primarily to metabolic effects, whereas activation of IR-A by IGF-II led primarily to mitogenic effects. These differences in the biological effects of IR-A when activated by either IGF-II or insulin were associated with differential recruitment and activation of intracellular substrates. IR-A was preferentially expressed in fetal cells such as fetal fibroblasts, muscle, liver and kidney and had a relatively increased proportion of isoform A. IR-A expression was also increased in several tumors including those of the breast and colon. These data indicate, therefore, that there are two receptors for IGF-II, both IGF-I-R and IR-A. Further, they suggest that interaction of IGF-II with IR-A may play a role both in fetal growth and cancer biology.

Specialty section: This article was submitted to Cancer Endocrinology, a section of the journal Frontiers in Oncology