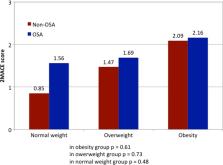 Risk stratification in patients with atrial fibrillation (AF) is critically important because this group is at high risk of mortality and morbidity. One of the comorbidities potentially affecting thromboembolic and total cardiovascular risk is obstructive sleep apnea (OSA). The aim of this study was to determine whether or not patients with atrial fibrillation and concomitant obstructive sleep apnea have a higher predicted cardiovascular risk than those without sleep-disordered breathing.

The study was designed to be a cross-sectional observational study. Consecutive patients with primary diagnosis of AF who qualified for first-ever catheter ablation between 2011 and 2013 were enrolled. All patients had an overnight polysomnography performed for the diagnosis of OSA and calculation of a 2MACE score—a cardiovascular risk assessment score for AF.

OSA prevalence is increased in AF patients and is associated with an increase 2MACE score—an indicator of major cardiovascular events. There is a linear relationship between severity of OSA and increasing 2MACE scores, indicating increasing cardiovascular risk related to OSA severity.

Estimation of the clinically diagnosed proportion of sleep apnea syndrome in middle-aged men and women.

Terry Young,  Linda Evans,  Laurel Ann Finn … (1997)
The proportion of sleep apnea syndrome (SAS) in the general adult population that goes undiagnosed was estimated from a sample of 4,925 employed adults. Questionnaire data on doctor-diagnosed sleep apnea were followed up to ascertain the prevalence of diagnosed sleep apnea. In-laboratory polysomnography on a subset of 1,090 participants was used to estimate screen-detected sleep apnea. In this population, without obvious barriers to health care for sleep disorders, we estimate that 93% of women and 82% of men with moderate to severe SAS have not been clinically diagnosed. These findings provide a baseline for assessing health care resource needs for sleep apnea.

The occurrence of sleep-disordered breathing among middle-aged adults.

Obstructive sleep apnea and the recurrence of atrial fibrillation.

S M Shamsuzzaman,  Bernard Gersh,  Naomi Friedman … (2003)
We tested the hypothesis that patients with untreated obstructive sleep apnea (OSA) would be at increased risk for recurrence of atrial fibrillation (AF) after cardioversion. We prospectively obtained data on history, echocardiogram, ECG, body mass index, hypertension, diabetes, NYHA functional class, ejection fraction, left atrial appendage velocity, and medications in patients with AF/atrial flutter referred for DC cardioversion. Forty-three individuals were identified as having OSA on the basis of a previous sleep study. Data regarding the use of continuous positive airway pressure (CPAP) and recurrence of AF were obtained for 39 of these patients. Follow-up data were also obtained in 79 randomly selected postcardioversion patients (controls) who did not have any previous sleep study. Twenty-seven of the 39 OSA patients either were not receiving any CPAP therapy (n=25) or were using CPAP inappropriately (n=2). Recurrence of AF at 12 months in these 27 patients was 82%, higher than the 42% recurrence in the treated OSA group (n=12, P=0.013) and the 53% recurrence (n=79, P=0.009) in the 79 control patients. Of the 25 OSA patients who had not been treated at all, the nocturnal fall in oxygen saturation was greater (P=0.034) in those who had recurrence of AF (n=20) than in those without recurrence (n=5). Patients with untreated OSA have a higher recurrence of AF after cardioversion than patients without a polysomnographic diagnosis of sleep apnea. Appropriate treatment with CPAP in OSA patients is associated with lower recurrence of AF.