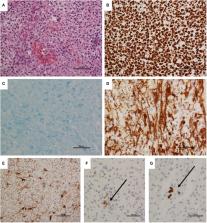 Complications involving the central nervous system (CNS) occur in 9–14% of patients following allogeneic hematopoietic stem cell transplantation (HSCT), including stroke-like episodes, demyelination, encephalitis, and nonspecific neurological symptoms. Here we report a case of multiple sclerosis (MS) like relapsing remitting encephalomyelitis following allogeneic HSCT, which did not respond to disease modifying therapies (DMTs) and “domino” autologous HSCT. A 53-year-old male was treated with allogeneic HSCT for lymphoid blast transformation of chronic myeloid leukemia. Ten months later he presented with confusion, slurred speech, left sided facial weakness and ataxia. A magnetic resonance imaging brain scan showed multiple enhancing tumefactive lesions. Neuromyelitis optica (NMO) and myelin oligodendrocyte glycoprotein (MOG) antibodies were negative. After extensive investigations for infections, autoimmune disorders and recurrence of malignancy, he underwent brain biopsy, which showed a macrophage rich lesion with severe myelin loss but axonal preservation indicating a demyelinating pathology. Although his symptoms improved with corticosteroids, he relapsed five months later. In the absence of any systemic features suggesting graft versus host disease (GvHD), his presentation was thought to be compatible with MS. The illness followed an aggressive course that did not respond to glatiramer acetate and natalizumab. He was therefore treated with “domino” autologous HSCT, which also failed to induce long-term remission. Despite further treatment with ocrelizumab, he died of progressive disease. An autopsy limited to the examination of brain revealed multifocal destructive leukoencephalopathy with severe myelin and axonal loss. Immunohistochemistry showed macrophage located in the perivascular area, with no T or B lymphocytes. The appearance was unusual and not typical for chronic MS plaques. Reported cases of CNS demyelination following allogeneic HSCT are very limited in the literature, especially in relation to histopathological examination. Although the clinical disease course of our patient following allogeneic HSCT resembled an “MS-like” relapsing remitting encephalomyelitis, the autopsy examination did not show any evidence of active inflammation. The impact of DMTs and HSCT on the histological appearance of “MS-like” CNS pathologies is unknown. Therefore, reporting this and similar cases will improve our awareness and understanding of underlying disease mechanisms.

Patrick Vermersch,  Rabah Benrabah,  Nicolas Schmidt … (2012)
Background Treatment options for patients suffering from progressive forms of multiple sclerosis (MS) remain inadequate. Mast cells actively participate in the pathogenesis of MS, in part because they release large amounts of various mediators that sustain the inflammatory network. Masitinib, a selective oral tyrosine kinase inhibitor, effectively inhibits the survival, migration and activity of mast cells. This exploratory study assessed the safety and clinical benefit of masitinib in the treatment of primary progressive MS (PPMS) or relapse-free secondary progressive MS (rfSPMS). Methods Multicenter, randomized, placebo-controlled, proof-of-concept trial. Masitinib was administered orally at 3 to 6 mg/kg/day for at least 12 months, with dose adjustment permitted in event of insufficient response with no toxicity. The primary response endpoint was the change relative to baseline in the multiple sclerosis functional composite score (MSFC). Clinical response was defined as an increase in MSFC score relative to baseline of > 100%. Results Thirty-five patients were randomized to receive masitinib (N = 27) or placebo (N = 8). Masitinib was relatively well tolerated with the most common adverse events being asthenia, rash, nausea, edema, and diarrhea. The overall frequency of adverse events was similar to the placebo group, however, a higher incidence of severe and serious events was associated with masitinib treatment. Masitinib appeared to have a positive effect on MS-related impairment for PPMS and rfSPMS patients, as evidenced by an improvement in MSFC scores relative to baseline, compared with a worsening MSFC score in patients receiving placebo; +103% ± 189 versus -60% ± 190 at month-12, respectively. This positive, albeit non-statistically significant response was observed as early as month-3 and sustained through to month-18, with similar trends seen in the PPMS and rfSPMS subpopulations. A total of 7/22 (32%) assessable masitinib patients reported clinical response following 12 months of treatment (according to the modified intent-to-treat population, observed cases) compared with none in the placebo group. The Expanded Disability Status Scale remained stable for both treatment groups. Conclusion These data suggest that masitinib is of therapeutic benefit to PPMS and rfSPMS patients and could therefore represent an innovative avenue of treatment for this disease. This exploratory trial provides evidence that may support a larger placebo-controlled investigation.

Pere Barba,  José Luis Piñana,  David Valcárcel … (2009)
Neurological complications (NC) after allogeneic hematopoietic stem cell transplantation (allo-HSCT) are common and life-threatening in most cases. They may involve either the central (CNS) or peripheral nervous system (PNS). The aim of this study was to describe incidence and characteristics of NC after reduced-intensity conditioning allo-HSCT (allo-RIC), an unexplored setting. For this purpose, we reviewed 191 consecutive patients who underwent this procedure at our institution between January 1999 and December 2006. The median follow-up for survivors was 48 months (3-98 months). RIC included fludarabine (Flu) 150 mg/m(2) in combination with busulfan (Bu) 8-10mg/kg (n=61), melphalan (Mel) 70-140 mg/m(2) (n=119), cyclophosphamide (Cy) 120 mg/kg (n=7), or low-dose total body irradiation (TBI) 2Gy (n=4). Graft-versus-host disease (GVHD) prophylaxis consisted of cyclosporine A (CsA) in combination with methotrexate (MTX; n=134) or mycophenolate mofetil (MMF; n=52). Twenty-seven patients (14%) developed a total of 31 NC (23 CNS and 8 PNS) for a 4-year cumulative incidence of 16% (95% confidence interval [CI] 11-23). CNS complications included nonfocal encephalopathies in 11 patients, meningoencephalitis in 5 patients, and stroke or hemorrhage in 4. PNS complications consisted of 5 cases of mononeuropathies and 3 cases of polyneuropathies. Drug-related toxicity was responsible for 10 of the 31 events (32%) (8 caused by CsA). Interestingly, 14 of the 23 CNS events (61%) and only 1 of the 8 PNS complications (13%) appeared before day +100 (P=.01). Overall, patients presenting NC showed a trend for higher 1-year nonrelapse mortality (NRM) (37% versus 20%, P=.08). In patients with CNS involvement, 1-year NRM was significantly worse (42% versus 20%, P=.02). CNS NC also had a negative impact on 4-year overall survival (OS; 33% versus 45%, P=.05). In conclusion, our study showed that NC are observed after allo-RIC and have diverse features. NC affecting the CNS have earlier onset and worse outcome than those involving the PNS.

Alan Tyndall,  Thomas Daikeler (2007)
Autoimmunity after stem-cell transplantation has been observed over decades. Evidence comes from single case reports or small series. Autoimmune phenomena are known in both the autologous and the allogeneic settings, irrespective of the graft source. Most publications deal with autoantibody production after transplantation; more rarely, the appearance of the associated autoimmune disease is reported. Autoimmune thyroid disease and autoimmune cytopenias are most often described. Homeostatic expansion after transplantation-induced lymphopenia is thought to be a trigger for loss of self-tolerance and proliferation of autoreactive T-cells in these patients. With allogeneic haematopoietic stem-cell transplantation, adoptive transfer of autoimmune disease has been shown, raising the issue of graft quality. Many of the clinical and laboratory features of graft-versus-host disease (GvHD), especially in its chronic form, resemble those of autoimmune diseases, and the pathophysiological mechanisms are similar. Prospective data for a better understanding of autoimmunity and 'altered' immunity after stem-cell transplantation are needed.

This article was submitted to Alloimmunity and Transplantation, a section of the journal Frontiers in Immunology