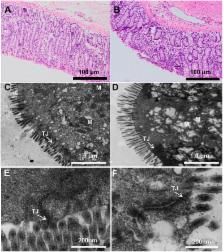 Remarkably little information is available about the impact of high-grain (HG) feeding on colonic mucosa-associated bacteria and mucosal morphology. In the present study, 12 male goats were randomly assigned to either a hay diet (n = 6) or an HG diet (65% grain; n = 6) to characterise the changes in the composition of the bacterial community in colonic mucosa and the mucosal morphology of the colon. The results showed that HG feeding decreased the colonic pH and increased the concentrations of total short chain fatty acids and lipopolysaccharides in colonic digesta. The principal coordinate analysis results showed that the HG diet altered the colonic mucosal bacterial communities, with an increase in the abundance of genus Blautia and a decrease in the abundance of genera Bacillus, Enterococcus, and Lactococcus. The HG-fed goats showed sloughing of the surface layer epithelium, intercellular tight junction erosion, cell mitochondrial damage, and upregulation of the relative mRNA expression of IL-2 and IFN-γ in colonic mucosa. Collectively, our data indicate that HG feeding induced changes in colonic mucosal morphology and cytokines expression that might be caused by excessive fermentation and dramatic shifts in the bacterial populations in the colon.

Eric C. Martens,  Craig Cameron,  Nicole M. Koropatkin (2012)
Symbiotic microorganisms that reside in the human intestine are adept at foraging glycans and polysaccharides, including those in dietary plants (starch, hemicellulose and pectin), animal-derived cartilage and tissue (glycosaminoglycans and N-linked glycans), and host mucus (O-linked glycans). Fluctuations in the abundance of dietary and endogenous glycans, combined with the immense chemical variation among these molecules, create a dynamic and heterogeneous environment in which gut microorganisms proliferate. In this Review, we describe how glycans shape the composition of the gut microbiota over various periods of time, the mechanisms by which individual microorganisms degrade these glycans, and potential opportunities to intentionally influence this ecosystem for better health and nutrition.

Phylogenetic relationships of butyrate-producing bacteria from the human gut.

David Duncan,  E. Pryde,  Harry J. Flint … (2000)
Butyrate is a preferred energy source for colonic epithelial cells and is thought to play an important role in maintaining colonic health in humans. In order to investigate the diversity and stability of butyrate-producing organisms of the colonic flora, anaerobic butyrate-producing bacteria were isolated from freshly voided human fecal samples from three healthy individuals: an infant, an adult omnivore, and an adult vegetarian. A second isolation was performed on the same three individuals 1 year later. Of a total of 313 bacterial isolates, 74 produced more than 2 mM butyrate in vitro. Butyrate-producing isolates were grouped by 16S ribosomal DNA (rDNA) PCR-restriction fragment length polymorphism analysis. The results indicate very little overlap between the predominant ribotypes of the three subjects; furthermore, the flora of each individual changed significantly between the two isolations. Complete sequences of 16S rDNAs were determined for 24 representative strains and subjected to phylogenetic analysis. Eighty percent of the butyrate-producing isolates fell within the XIVa cluster of gram-positive bacteria as defined by M. D. Collins et al. (Int. J. Syst. Bacteriol. 44:812-826, 1994) and A. Willems et al. (Int. J. Syst. Bacteriol. 46:195-199, 1996), with the most abundant group (10 of 24 or 42%) clustering with Eubacterium rectale, Eubacterium ramulus, and Roseburia cecicola. Fifty percent of the butyrate-producing isolates were net acetate consumers during growth, suggesting that they employ the butyryl coenzyme A-acetyl coenzyme A transferase pathway for butyrate production. In contrast, only 1% of the 239 non-butyrate-producing isolates consumed acetate.