Heme in pathophysiology: a matter of scavenging, metabolism and trafficking across cell membranes 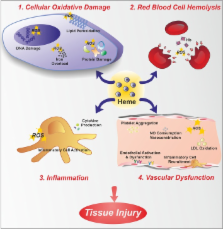 Milton Saier,  I M Paulsen,  S S Pao (1998)
The major facilitator superfamily (MFS) is one of the two largest families of membrane transporters found on Earth. It is present ubiquitously in bacteria, archaea, and eukarya and includes members that can function by solute uniport, solute/cation symport, solute/cation antiport and/or solute/solute antiport with inwardly and/or outwardly directed polarity. All homologous MFS protein sequences in the public databases as of January 1997 were identified on the basis of sequence similarity and shown to be homologous. Phylogenetic analyses revealed the occurrence of 17 distinct families within the MFS, each of which generally transports a single class of compounds. Compounds transported by MFS permeases include simple sugars, oligosaccharides, inositols, drugs, amino acids, nucleosides, organophosphate esters, Krebs cycle metabolites, and a large variety of organic and inorganic anions and cations. Protein members of some MFS families are found exclusively in bacteria or in eukaryotes, but others are found in bacteria, archaea, and eukaryotes. All permeases of the MFS possess either 12 or 14 putative or established transmembrane alpha-helical spanners, and evidence is presented substantiating the proposal that an internal tandem gene duplication event gave rise to a primordial MFS protein prior to divergence of the family members. All 17 families are shown to exhibit the common feature of a well-conserved motif present between transmembrane spanners 2 and 3. The analyses reported serve to characterize one of the largest and most diverse families of transport proteins found in living organisms.

Anupama Narla,  B Ebert (2010)
Ribosomopathies compose a collection of disorders in which genetic abnormalities cause impaired ribosome biogenesis and function, resulting in specific clinical phenotypes. Congenital mutations in RPS19 and other genes encoding ribosomal proteins cause Diamond-Blackfan anemia, a disorder characterized by hypoplastic, macrocytic anemia. Mutations in other genes required for normal ribosome biogenesis have been implicated in other rare congenital syndromes, Schwachman-Diamond syndrome, dyskeratosis congenita, cartilage hair hypoplasia, and Treacher Collins syndrome. In addition, the 5q- syndrome, a subtype of myelodysplastic syndrome, is caused by a somatically acquired deletion of chromosome 5q, which leads to haploinsufficiency of the ribosomal protein RPS14 and an erythroid phenotype highly similar to Diamond-Blackfan anemia. Acquired abnormalities in ribosome function have been implicated more broadly in human malignancies. The p53 pathway provides a surveillance mechanism for protein translation as well as genome integrity and is activated by defects in ribosome biogenesis; this pathway appears to be a critical mediator of many of the clinical features of ribosomopathies. Elucidation of the mechanisms whereby selective abnormalities in ribosome biogenesis cause specific clinical syndromes will hopefully lead to novel therapeutic strategies for these diseases.

Sarah L. Doyle,  T Krogmann,  Kevin D. Ross … (1998)
MCF-7/AdrVp is a multidrug-resistant human breast cancer subline that displays an ATP-dependent reduction in the intracellular accumulation of anthracycline anticancer drugs in the absence of overexpression of known multidrug resistance transporters such as P glycoprotein or the multidrug resistance protein. RNA fingerprinting led to the identification of a 2.4-kb mRNA that is overexpressed in MCF-7/AdrVp cells relative to parental MCF-7 cells. The mRNA encodes a 655-aa [corrected] member of the ATP-binding cassette superfamily of transporters that we term breast cancer resistance protein (BCRP). Enforced expression of the full-length BCRP cDNA in MCF-7 breast cancer cells confers resistance to mitoxantrone, doxorubicin, and daunorubicin, reduces daunorubicin accumulation and retention, and causes an ATP-dependent enhancement of the efflux of rhodamine 123 in the cloned transfected cells. BCRP is a xenobiotic transporter that appears to play a major role in the multidrug resistance phenotype of MCF-7/AdrVp human breast cancer cells.

This article was submitted to Drug Metabolism and Transport, a section of the journal Frontiers in Pharmacology.

‡These authors have contributed equally to this work.