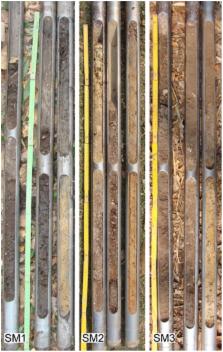 We report on previously unknown early archaeological sites in the Bolivian lowlands, demonstrating for the first time early and middle Holocene human presence in western Amazonia. Multidisciplinary research in forest islands situated in seasonally-inundated savannahs has revealed stratified shell middens produced by human foragers as early as 10,000 years ago, making them the oldest archaeological sites in the region. The absence of stone resources and partial burial by recent alluvial sediments has meant that these kinds of deposits have, until now, remained unidentified. We conducted core sampling, archaeological excavations and an interdisciplinary study of the stratigraphy and recovered materials from three shell midden mounds. Based on multiple lines of evidence, including radiocarbon dating, sedimentary proxies (elements, steroids and black carbon), micromorphology and faunal analysis, we demonstrate the anthropogenic origin and antiquity of these sites. In a tropical and geomorphologically active landscape often considered challenging both for early human occupation and for the preservation of hunter-gatherer sites, the newly discovered shell middens provide evidence for early to middle Holocene occupation and illustrate the potential for identifying and interpreting early open-air archaeological sites in western Amazonia. The existence of early hunter-gatherer sites in the Bolivian lowlands sheds new light on the region’s past and offers a new context within which the late Holocene “Earthmovers” of the Llanos de Moxos could have emerged.

The history of South American tropical precipitation for the past 25,000 years.

S. Cross,  Daniel Grove,  Brian Rowe … (2001)
Long sediment cores recovered from the deep portions of Lake Titicaca are used to reconstruct the precipitation history of tropical South America for the past 25,000 years. Lake Titicaca was a deep, fresh, and continuously overflowing lake during the last glacial stage, from before 25,000 to 15,000 calibrated years before the present (cal yr B.P.), signifying that during the last glacial maximum (LGM), the Altiplano of Bolivia and Peru and much of the Amazon basin were wetter than today. The LGM in this part of the Andes is dated at 21,000 cal yr B.P., approximately coincident with the global LGM. Maximum aridity and lowest lake level occurred in the early and middle Holocene (8000 to 5500 cal yr B.P.) during a time of low summer insolation. Today, rising levels of Lake Titicaca and wet conditions in Amazonia are correlated with anomalously cold sea-surface temperatures in the northern equatorial Atlantic. Likewise, during the deglacial and Holocene periods, there were several millennial-scale wet phases on the Altiplano and in Amazonia that coincided with anomalously cold periods in the equatorial and high-latitude North Atlantic, such as the Younger Dryas.

Francis Mayle,  T Killeen,  Tim Killeen … (2001)
Amazonian rain forest-savanna boundaries are highly sensitive to climatic change and may also play an important role in rain forest speciation. However, their dynamics over millennial time scales are poorly understood. Here, we present late Quaternary pollen records from the southern margin of Amazonia, which show that the humid evergreen rain forests of eastern Bolivia have been expanding southward over the past 3000 years and that their present-day limit represents the southernmost extent of Amazonian rain forest over at least the past 50,000 years. This rain forest expansion is attributed to increased seasonal latitudinal migration of the Intertropical Convergence Zone, which can in turn be explained by Milankovitch astronomic forcing.

L Bourgoin,  Charles A Nittrouer,  Jenna R. Montgomery … (2003)
Continental-scale rivers with a sandy bed sequester a significant proportion of their sediment load in flood plains. The spatial extent and depths of such deposits have been described, and flood-plain accumulation has been determined at decadal timescales, but it has not been possible to identify discrete events or to resolve deposition on near-annual timescales. Here we analyse (210)Pb activity profiles from sediment cores taken in the pristine Beni and Mamore river basins, which together comprise 720,000 km2 of the Amazon basin, to investigate sediment accumulation patterns in the Andean-Amazonian foreland. We find that in most locations, sediment stratigraphy is dominated by discrete packages of sediments of uniform age, which are typically 20-80 cm thick, with system-wide recurrence intervals of about 8 yr, indicating relatively rare episodic deposition events. Ocean temperature and stream flow records link these episodic events to rapidly rising floods associated with La Niña events, which debouch extraordinary volumes of sediments from the Andes. We conclude that transient processes driven by the El Niño/Southern Oscillation cycle control the formation of the Bolivian flood plains and modulate downstream delivery of sediments as well as associated carbon, nutrients and pollutants to the Amazon main stem.

The present work has been funded by the Swiss National Science Foundation (SNSF http://www.snf.ch/E/Pages/default.aspx), grants N° 200021-122289 and 200020-141277/1. The funders had no role in study design, data collection and analysis, decision to publish, or preparation of the manuscript.