Neurocognitive poetics: methods and models for investigating the neuronal and cognitive-affective bases of literature reception 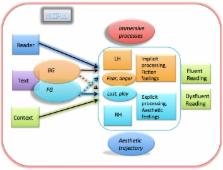 A long tradition of research including classical rhetoric, esthetics and poetics theory, formalism and structuralism, as well as current perspectives in (neuro)cognitive poetics has investigated structural and functional aspects of literature reception. Despite a wealth of literature published in specialized journals like Poetics, however, still little is known about how the brain processes and creates literary and poetic texts. Still, such stimulus material might be suited better than other genres for demonstrating the complexities with which our brain constructs the world in and around us, because it unifies thought and language, music and imagery in a clear, manageable way, most often with play, pleasure, and emotion (Schrott and Jacobs, 2011). In this paper, I discuss methods and models for investigating the neuronal and cognitive-affective bases of literary reading together with pertinent results from studies on poetics, text processing, emotion, or neuroaesthetics, and outline current challenges and future perspectives.

SWIFT: a dynamical model of saccade generation during reading.

Ralf Engbert,  Reinhold Kliegl,  Antje Nuthmann … (2005)
Mathematical models have become an important tool for understanding the control of eye movements during reading. Main goals of the development of the SWIFT model (R. Engbert, A. Longtin, & R. Kliegl, 2002) were to investigate the possibility of spatially distributed processing and to implement a general mechanism for all types of eye movements observed in reading experiments. The authors present an advanced version of SWIFT that integrates properties of the oculomotor system and effects of word recognition to explain many of the experimental phenomena faced in reading research. They propose new procedures for the estimation of model parameters and for the test of the model's performance. They also present a mathematical analysis of the dynamics of the SWIFT model. Finally, within this framework, they present an analysis of the transition from parallel to serial processing. Copyright (c) 2005 APA, all rights reserved.

The human amygdala: an evolved system for relevance detection.

Tiziana Zalla,  David Sander,  Jordan Grafman (2003)
Evidence from pioneering animal research has suggested that the amygdala is involved in the processing of aversive stimuli, particularly fear-related information. Fear is central in the evolution of the mammalian brain: it is automatically and rapidly elicited by potentially dangerous and deadly events. The view that the amygdala shares the main characteristics of modular systems, e.g. domain specificity, automaticity, and cognitive impenetrability, has become popular in neuroscience. Because of its computational properties, it has been proposed to implement a rapid-response 'fear module'. In this article, we review recent patient and neuroimaging data of the human brain and argue that the fundamental criteria for the amygdala to be a modular system are not met. We propose a different computational view and suggest the notion of a specific involvement of the human amygdala in the appraisal of relevant events that include, but are not restricted to, fear-related stimuli. Considering the amygdala as a 'relevance detector' would integrate the 'fear module' hypothesis with the concept of an evolved neural system devoted to the processing of a broader category of biologically relevant stimuli. In primates, socially relevant events appear to have become, through evolution, the dominant elements of the amygdala's domain of specificity.