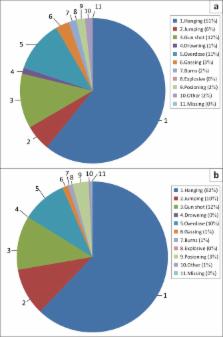 Suicidal behaviour is a leading contributor to the burden of disease worldwide and varies widely between countries. South African figures are amongst the highest in the world, with recent trends indicating a disturbing rise, especially amongst the younger age groups, across all races.

This study analysed sociodemographic characteristics and trends relating to suicides committed in Durban, South Africa during the period of 2006–2007.

A retrospective analysis of suicidal deaths (during 2006–2007), extracted from autopsy registers at all three government-run mortuaries in Durban, was conducted.

The total number of suicides in Durban increased by 6.68% from 2006 to 2007. Suicide accounted for an average of 8.8% of all non-natural deaths per year of the study. The overall suicide rates of 14.53 (2006) and 15.53 (2007) per 100 000 population are comparable with national and global figures. The majority of suicides occurred in single unemployed persons, men and younger age groups. The largest number of suicides per year was recorded in black people, followed by Indian, white and mixed-race people. Hanging was the preferred method in the majority of victims, followed by self-poisoning, shooting and jumping.

The findings indicate a disturbingly high suicide rate amongst the various population and age groups in Durban. The dominant methods used may be influenced by ease of access. The reported trends may worsen unless there is a swift and decisive public health response and cohesive community-based programmes which include a supportive multidisciplinary network.

Michael R Phillips, Xianyun Li, Yanping Zhang (2002)
A wide range of suicide rates are reported for China because official mortality data are based on an unrepresentative sample and because different reports adjust crude rates in different ways. We aimed to present an accurate picture of the current pattern of suicide in China on the basis of conservative estimates of suicide rates in different population cohorts. Suicide rates by sex, 5-year age-group, and region (urban or rural) reported in mortality data for 1995-99 provided by the Chinese Ministry of Health were adjusted according to an estimated rate of unreported deaths and projected to the corresponding population. We estimated a mean annual suicide rate of 23 per 100,000 and a total of 287,000 suicide deaths per year. Suicide accounted for 3(.)6% of all deaths in China and was the fifth most important cause of death. Among young adults 15-34 years of age, suicide was the leading cause of death, accounting for 19% of all deaths. The rate in women was 25% higher than in men, mainly because of the large number of suicides in young rural women. Rural rates were three times higher than urban rates-a difference that remained true for both sexes, for all age-groups, and over time. Suicide is a major public-health problem for China that is only gradually being recognised. The unique pattern of suicides in China is widely acknowledged, so controversy about the overall suicide rate should not delay the development and testing of China-specific suicide-prevention programmes.

Alexandra Fleischmann, José Bertolote (2005)
Suicide has been identified as a serious public health problem which is receiving increasing attention. Whereas a large number of Member States of the World Health Organization (WHO) reports on suicide mortality, no systematic national data on attempted suicide exist. Having recognized the need for comparable information about attempted suicide across different countries and cultures, WHO's Multisite Intervention Study on Suicidal Behaviors is presented.

Access to farming pesticides and risk for suicide in Chinese rural young people.

Yuanyuan Kong, Jie Zhang (2010)
Suicide is a leading cause of death in individuals 15-34 years of age in China. Highly lethal pesticides are a common method used for suicide in Chinese rural areas. This case-control study aimed to test hypotheses concerning the suicide risks associated with pesticide access. Subjects included 370 rural completed suicides aged 15-34 years and 370 living controls matched on age, gender and residence (rural/urban location). Data were collected by a psychological autopsy design with proxy respondents. Pesticide access was a significant risk factor for suicide even after controlling for other known risk factors in social and psychiatric domains, such as education level, living situation, marital status, family annual income and mental disorder. Increased risk was accounted for by access to insecticide rather than other types of pesticides. Suicide intervention in China should focus on restricting access to pesticides, especially highly toxic insecticide, improving the resuscitation skills of rural primary-care health providers, promoting psychological and social support networks in rural areas and educating the general public about the suicide risk of having pesticides stored at the households. Copyright © 2009 Elsevier Ireland Ltd. All rights reserved.

AOSIS OpenJournals. This work is licensed under the Creative Commons Attribution License.