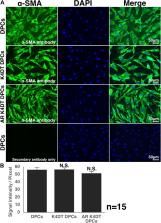 Androgenetic alopecia (AGA) is the most common type of hair loss, and is mainly caused by the biological effects of testosterone on dermal papilla cells (DPCs). In vitro culturing of DPCs might be a useful tool for the screening of target molecule of AGA. However, primary DPCs cannot continuously proliferate owing to cellular senescence and cell culture stress. In this study, we introduced mutant cyclin-dependent kinase 4 (CDK4), Cyclin D1, and telomerase reverse transcriptase (TERT) into DPCs. We confirmed protein expression of CDK4 and Cyclin D1, and enzymatic activity of TERT. Furthermore, we found the established cell line was free from cellular senescence. We also introduced the androgen receptor gene using a recombinant retrovirus, to compensate the transcriptional suppressed endogenous androgen receptor in the process of cell proliferation. Furthermore, we detected the efficient nuclear translocation of androgen receptor into the nucleus after the treatment of dihydrotestosterone, indicating the functionality of our introduced receptor. Our established cell line is a useful tool to identify the downstream signaling pathway, which activated by the testosterone.

Keratinocyte growth factor is required for hair development but not for wound healing.

L. Guo, L Degenstein, E. Fuchs (1996)
Keratinocyte growth factor (KGF), also known as fibroblast growth factor 7 (FGF7), is synthesized by skin fibroblasts. However, its mitogenic activity is on skin keratinocytes, where it is the most potent growth factor identified thus far. To explore KGF's function in vivo, we used embryonic stem cell technology to generate mice lacking KGF. Over time, their fur developed a matted appearance, very similar to that of the rough mouse, whose recessive mutation maps at or near the KGF locus on mouse chromosome 2. In contrast to the recently reported transforming growth factor-alpha (TGF-alpha) and FGF5 knockouts, which showed defects in the follicle outer-root sheath and the hair growth cycle, respectively, the hair defect in the KGF knockout seemed to be restricted to the cells giving rise to the hair shaft. Thus, we have uncovered a third, and at least partially nonoverlapping, growth factor pathway involved in orchestrating hair follicle growth and/or differentiation. Surprisingly, the absence of KGF resulted in no abnormalities in epidermal growth or wound healing. This was true even when we engineered double knockout mice, null for both KGF and TGF-alpha, two factors that are increased dramatically in the normal wound-healing process. Whereas we found no evidence of compensatory changes at the mRNA level of wounded knockout mice, these data imply that the regulation of epidermal growth is complex and involves a number of growth stimulatory factors that go beyond what are thought to be the major paracrine and autocrine growth factors. We suggest that the redundancy in epidermal growth and wound healing is likely to stem from the vitality of these functions to the organism, a feature that is not a consideration for the hair follicle.

Mi Kwack, Young Kwan Sung, Eun Jung Chung … (2008)
Recent studies suggest that androgen-driven alteration to the autocrine and paracrine factors produced by scalp dermal papilla (DP) cells may be a key to androgen-potentiated balding. Here, we screened dihydrotestosterone (DHT)-regulated genes in balding DP cells and found that dickkopf 1 (DKK-1) is one of the most upregulated genes. DKK-1 messenger RNA is upregulated in 3-6 hours after 50-100 nM DHT treatment and ELISA showed that DKK-1 is secreted from DP cells in response to DHT. A co-culture system using outer root sheath (ORS) keratinocytes and DP cells showed that DHT inhibits the growth of ORS cells, and neutralizing antibody against DKK-1 significantly reversed the growth inhibition of ORS cells. Analysis of co-cultured ORS cells showed a significant increment of sub-G1 apoptotic cells in response to DHT. Also, recombinant human DKK-1 inhibited the growth of ORS cells and triggered apoptotic cell death. In addition, DHT-induced epithelial cell death in cultured hair follicles was reversed by neutralizing DKK-1 antibody. Moreover, immunoblotting showed that the DKK-1 level is up in the bald scalp compared with the haired scalp of patients with androgenetic alopecia. Altogether, our data strongly suggest that DHT-inducible DKK-1 is involved in DHT-driven balding.

This article was submitted to Cell Growth and Division, a section of the journal Frontiers in Cell and Developmental Biology