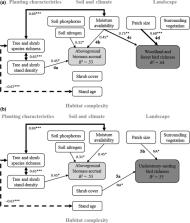 To combat global warming and biodiversity loss, we require effective forest restoration that encourages recovery of species diversity and ecosystem function to deliver essential ecosystem services, such as biomass accumulation. Further, understanding how and where to undertake restoration to achieve carbon sequestration and biodiversity conservation would provide an opportunity to finance ecosystem restoration under carbon markets. We surveyed 30 native mixed‐species plantings in subtropical forests and woodlands in Australia and used structural equation modeling to determine vegetation, soil, and climate variables most likely driving aboveground biomass accrual and bird richness and investigate the relationships between plant diversity, aboveground biomass accrual, and bird diversity. We focussed on woodland and forest‐dependent birds, and functional groups at risk of decline (insectivorous, understorey‐nesting, and small‐bodied birds). We found that mean moisture availability strongly limits aboveground biomass accrual and bird richness in restoration plantings, indicating potential synergies in choosing sites for carbon and biodiversity purposes. Counter to theory, woody plant richness was a poor direct predictor of aboveground biomass accrual, but was indirectly related via significant, positive effects of stand density. We also found no direct relationship between aboveground biomass accrual and bird richness, likely because of the strong effects of moisture availability on both variables. Instead, moisture availability and patch size strongly and positively influenced the richness of woodland and forest‐dependent birds. For understorey‐nesting birds, however, shrub cover and patch size predicted richness. Stand age or area of native vegetation surrounding the patch did not influence bird richness. Our results suggest that in subtropical biomes, planting larger patches to higher densities, ideally using a diversity of trees and shrubs (characteristics of ecological plantings) in more mesic locations will enhance the provision of carbon and biodiversity cobenefits. Further, ecological plantings will aid the rapid recovery of woodland and forest bird richness, with comparable aboveground biomass accrual to less diverse forestry plantations.

We assessed native mixed‐species plantings in subtropical forests and woodlands in Australia to determine vegetation, soil, and climate variables most likely driving aboveground biomass (AGB) accrual and bird richness and investigate the relationships between plant diversity, AGB accrual, and bird diversity. Our results suggest that in subtropical biomes, planting larger patches to higher densities, ideally using a diversity of trees and shrubs, in locations with higher water availability will enhance the provision of carbon and biodiversity cobenefits.

Why have birds in the woodlands of Southern Australia declined?

Casey M. Godwin,  J Duffy,  Bradley Cardinale (2017)
More than 500 controlled experiments have collectively suggested that biodiversity loss reduces ecosystem productivity and stability. Yet the importance of biodiversity in sustaining the world’s ecosystems remains controversial, largely because of the lack of validation in nature, where strong abiotic forcing and complex interactions are assumed to swamp biodiversity effects. Here we test this assumption by analysing 133 estimates reported in 67 field studies that statistically separated the effects of biodiversity on biomass production from those of abiotic forcing. Contrary to the prevailing opinion of the previous two decades that biodiversity would have rare or weak effects in nature, we show that biomass production increases with species richness in a wide range of wild taxa and ecosystems. In fact, after controlling for environmental covariates, increases in biomass with biodiversity are stronger in nature than has previously been documented in experiments and comparable to or stronger than the effects of other well-known drivers of productivity, including climate and nutrient availability. These results are consistent with the collective experimental evidence that species richness increases community biomass production, and suggest that the role of biodiversity in maintaining productive ecosystems should figure prominently in global change science and policy.