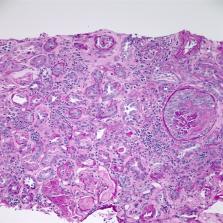 COVID-19 and granulomatosis with polyangiitis share many clinical and radiological features, making it challenging for clinicians to distinguish between the two. In this case report, we describe a patient who was diagnosed with COVID-19 in October 2020. One month later, she presented with persistent fatigue, shortness of breath and anaemia with worsening renal functions, found to have elevated antineutrophil cytoplasmic antibodies and antiproteinase 3 antibodies, and diagnosed with granulomatosis with polyangiitis.

Multiorgan and Renal Tropism of SARS-CoV-2

Victor G. Puelles,  Marc Lütgehetmann,  Maja T Lindenmeyer … (2020)
To the Editor: Severe acute respiratory syndrome coronavirus 2 (SARS-CoV-2) preferentially infects cells in the respiratory tract, 1,2 but its direct affinity for organs other than the lungs remains poorly defined. Here, we present data from an autopsy series of 27 patients (see the clinical data in Table S1 in the Supplementary Appendix, available with the full text of this letter at NEJM.org) that show that SARS-CoV-2 can be detected in multiple organs, including the lungs, pharynx, heart, liver, brain, and kidneys. We first quantified the SARS-CoV-2 viral load in autopsy tissue samples obtained from 22 patients who had died from Covid-19. Seventeen patients (77%) had more than two coexisting conditions (Figure 1A), and a greater number of coexisting conditions was associated with SARS-CoV-2 tropism for the kidneys (Table S2), even in patients without a history of chronic kidney disease (Table S3). The highest levels of SARS-CoV-2 copies per cell were detected in the respiratory tract, and lower levels were detected the kidneys, liver, heart, brain, and blood (Figure 1B). These findings indicate a broad organotropism of SARS-CoV-2. Since the kidneys are among the most common targets of SARS-CoV-2, we performed in silico analysis of publicly available data sets of single-cell RNA sequencing. This analysis revealed that RNA for angiotensin-converting enzyme 2 (ACE2), transmembrane serine protease 2 (TMPRSS2), and cathepsin L (CTSL) — RNA of genes that are considered to facilitate SARS-CoV-2 infection 3 — is enriched in multiple kidney-cell types from fetal development through adulthood (Fig. S1). This enrichment may facilitate SARS-CoV-2–associated kidney injury, as previously suggested. 4 We also quantified the SARS-CoV-2 viral load in precisely defined kidney compartments obtained with the use of tissue microdissection from 6 patients who underwent autopsy (1 patient who was included in the previously mentioned 22 patients as an internal negative control, plus 5 additional patients). Three of these 6 patients had a detectable SARS-CoV-2 viral load in all kidney compartments examined, with preferential targeting of glomerular cells (Fig. S2). We also detected viral RNA and protein with high spatial resolution using in situ hybridization and indirect immunofluorescence with confocal microscopy (Figure 1C). Data on additional controls are provided in Figures S3 and S4. On the basis of these findings, renal tropism is a potential explanation of commonly reported new clinical signs of kidney injury in patients with Covid-19, 5 even in patients with SARS-CoV-2 infection who are not critically ill. Our results indicate that SARS-CoV-2 has an organotropism beyond the respiratory tract, including the kidneys, liver, heart, and brain, and we speculate that organotropism influences the course of Covid-19 disease and, possibly, aggravates preexisting conditions.

Purva Sharma,  Nupur N Uppal,  Rimda Wanchoo … (2020)
Reports show that AKI is a common complication of severe coronavirus disease 2019 (COVID-19) in hospitalized patients. Studies have also observed proteinuria and microscopic hematuria in such patients. Although a recent autopsy series of patients who died with severe COVID-19 in China found acute tubular necrosis in the kidney, a few patient reports have also described collapsing glomerulopathy in COVID-19.

B Haynes,  Mary S Wolff,  Barry Katz … (1982)
Eighty-five patients with Wegener's granulomatosis were studied for 21 years at the National Institutes of Health. Patients were treated with a protocol consisting of cyclophosphamide, 2 mg/kg body weight d, together with prednisone, 1 mg/kg body weight d, followed by conversion of the prednisone to an alternate-day regimen. Complete remissions were achieved in 79 of 85 patients (93%). The mean duration of remission for living patients was 48.2 (+/- 3.6) months. Twenty-three patients are off all therapy for a mean duration of 35.3 (+/- 6.3) months without therapy. This study provides a prospective experience with Wegener's granulomatosis and shows that long-term remissions can be induced and maintained in an extremely high number of patients by the combination of daily cyclophosphamide and alternate-day prednisone therapy.

This article is made freely available for use in accordance with BMJ’s website terms and conditions for the duration of the covid-19 pandemic or until otherwise determined by BMJ. You may use, download and print the article for any lawful, non-commercial purpose (including text and data mining) provided that all copyright notices and trade marks are retained.