The viral RNA capping machinery as a target for antiviral drugs 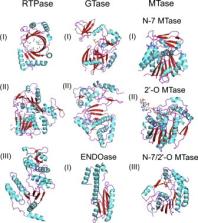 Most viruses modify their genomic and mRNA 5′-ends with the addition of an RNA cap, allowing efficient mRNA translation, limiting degradation by cellular 5′–3′ exonucleases, and avoiding its recognition as foreign RNA by the host cell. Viral RNA caps can be synthesized or acquired through the use of a capping machinery which exhibits a significant diversity in organization, structure and mechanism relative to that of their cellular host. Therefore, viral RNA capping has emerged as an interesting field for antiviral drug design. Here, we review the different pathways and mechanisms used to produce viral mRNA 5′-caps, and present current structures, mechanisms, and inhibitors known to act on viral RNA capping.

N. Kyle Tanner,  Patrick Linder,  Josette Banroques … (2006)
RNA helicases of the DEAD-box protein family have been shown to participate in every aspect of RNA metabolism. They are present in most organisms where they work as RNA helicases or RNPases. The properties of these enzymes in vivo remains poorly described, however some were extensively characterized in vitro, and the solved crystal structures of a few are now available. Taken together, this information gives insight into the regulation of ATP and RNA binding as well as in the ATPase and helicase activities. This review will focus on the description of the molecular characteristics of members of the DEAD-box protein family and on the enzymatic activities they possess.

Antiviral effect of catechins in green tea on influenza virus.

Jae-Min Song,  Kwang-Hee Lee,  Baik-Lin Seong (2005)
Polyphenolic compound catechins ((-)-epigallocatechin gallate (EGCG), (-)-epicatechin gallate (ECG) and (-)-epigallocatechin (EGC)) from green tea were evaluated for their ability to inhibit influenza virus replication in cell culture and for potentially direct virucidal effect. Among the test compounds, the EGCG and ECG were found to be potent inhibitors of influenza virus replication in MDCK cell culture and this effect was observed in all influenza virus subtypes tested, including A/H1N1, A/H3N2 and B virus. The 50% effective inhibition concentration (EC50) of EGCG, ECG, and EGC for influenza A virus were 22-28, 22-40 and 309-318 microM, respectively. EGCG and ECG exhibited hemagglutination inhibition activity, EGCG being more effective. However, the sensitivity in hemagglutination inhibition was widely different among three different subtypes of influenza viruses tested. Quantitative RT-PCR analysis revealed that, at high concentration, EGCG and ECG also suppressed viral RNA synthesis in MDCK cells whereas EGC failed to show similar effect. Similarly, EGCG and ECG inhibited the neuraminidase activity more effectively than the EGC. The results show that the 3-galloyl group of catechin skeleton plays an important role on the observed antiviral activity, whereas the 5'-OH at the trihydroxy benzyl moiety at 2-position plays a minor role. The results, along with the HA type-specific effect, suggest that the antiviral effect of catechins on influenza virus is mediated not only by specific interaction with HA, but altering the physical properties of viral membrane.

Noncytolytic control of viral infections by the innate and adaptive immune response.

F V Chisari,  Tee Guidotti (2000)
This review describes the contribution of noncytolytic mechanisms to the control of viral infections with a particular emphasis on the role of cytokines in these processes. It has long been known that most cell types in the body respond to an incoming viral infection by rapidly secreting antiviral cytokines such as interferon alpha/beta (IFN-alpha/beta). After binding to specific receptors on the surface of infected cells, IFN-alpha/beta has the potential to trigger the activation of multiple noncytolytic intracellular antiviral pathways that can target many steps in the viral life cycle, thereby limiting the amplification and spread of the virus and attenuating the infection. Clearance of established viral infections, however, requires additional functions of the immune response. The accepted dogma is that complete clearance of intracellular viruses by the immune response depends on the destruction of infected cells by the effector cells of the innate and adaptive immune system [natural killer (NK) cells and cytotoxic T cells (CTLs)]. This notion, however, has been recently challenged by experimental evidence showing that much of the antiviral potential of these cells reflects their ability to produce antiviral cytokines such as IFN-gamma and tumor necrosis factor (TNF)-alpha at the site of the infection. Indeed, these cytokines can purge viruses from infected cells noncytopathically as long as the cell is able to activate antiviral mechanisms and the virus is sensitive to them. Importantly, the same cytokines also control viral infections indirectly, by modulating the induction, amplification, recruitment, and effector functions of the immune response and by upregulating antigen processing and display of viral epitopes at the surface of infected cells. In keeping with these concepts, it is not surprising that a number of viruses encode proteins that have the potential to inhibit the antiviral activity of cytokines.