L-glutamine decreases the severity of mucositis induced by chemoradiotherapy in patients with locally advanced head and neck cancer: A double-blind, randomized, placebo-controlled trial 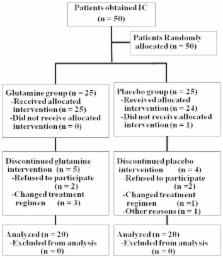 Updated clinical practice guidelines for the prevention and treatment of mucositis.

Mark Schubert,  ,  Linda S. Elting … (2007)
Considerable progress in research and clinical application has been made since the original guidelines for managing mucositis in cancer patients were published in 2004, and the first active drug for the prevention and treatment of this condition has been approved by the United States Food and Drug Administration and other regulatory agencies in Europe and Australia. These changes necessitate an updated review of the literature and guidelines. Panel members reviewed the biomedical literature on mucositis published in English between January 2002 and May 2005 and reached a consensus based on the criteria of the American Society of Clinical Oncology. Changes in the guidelines included recommendations for the use of palifermin for oral mucositis associated with stem cell transplantation, amifostine for radiation proctitis, and cryotherapy for mucositis associated with high-dose melphalan. Recommendations against specific practices were introduced: Systemic glutamine was not recommended for the prevention of gastrointestinal mucositis, and sucralfate and antimicrobial lozenges were not recommended for radiation-induced oral mucositis. Furthermore, new guidelines suggested that granulocyte-macrophage-colony stimulating factor mouthwashes not be used for oral mucositis prevention in the transplantation population. Advances in mucositis treatment and research have been complemented by an increased rate of publication on mucosal injury in cancer. However, additional and sustained efforts will be required to gain a fuller understanding of the pathobiology, impact on overall patient status, optimal therapeutic strategies, and improved educational programs for health professionals, patients, and caregivers. These efforts are likely to have significant clinical and economic impact on the treatment of cancer patients. Cancer 2007;109:820-31. (c) 2007 American Cancer Society.

Donald Sellitti,  J Procopio,  P Newsholme … (2005)
Glutamine is the most abundant free amino acid in the body and is known to play a regulatory role in several cell specific processes including metabolism (e.g., oxidative fuel, gluconeogenic precursor, and lipogenic precursor), cell integrity (apoptosis, cell proliferation), protein synthesis, and degradation, contractile protein mass, redox potential, respiratory burst, insulin resistance, insulin secretion, and extracellular matrix (ECM) synthesis. Glutamine has been shown to regulate the expression of many genes related to metabolism, signal transduction, cell defense and repair, and to activate intracellular signaling pathways. Thus, the function of glutamine goes beyond that of a simple metabolic fuel or protein precursor as previously assumed. In this review, we have attempted to identify some of the common mechanisms underlying the regulation of glutamine dependent cellular functions. (c) 2005 Wiley-Liss, Inc.

J. Lacey,  D Wilmore (1990)
The nonessential amino acid glutamine has recently been the focus of extensive scientific interest because of its importance in cell and tissue cultures and its physiologic role in animals and humans. Glutamine appears to be a unique amino acid, serving as a preferred respiratory fuel for rapidly proliferating cells, such as enterocytes and lymphocytes; a regulator of acid-base balance through the production of urinary ammonia; a carrier of nitrogen between tissues; and an important precursor of nucleic acids, nucleotides, amino sugars, and proteins. Abundant evidence suggests that glutamine may become a "conditionally essential" amino acid in the critically ill. During stress the body's requirements for glutamine appear to exceed the individual's ability to produce sufficient amounts of this amino acid. Provision of supplemental glutamine in specialized enteral or parenteral feeding may enhance nutritional management and augment recovery of the seriously ill while minimizing hospital stay.