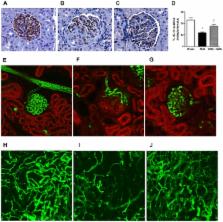 In vitro, CMC-conditioned medium, but not SC-conditioned medium, inhibited fibroblast collagen production and cell signalling in response to transforming growth factor-ß. The antifibrotic effects of CMCs and SCs were then evaluated in the 5/6 nephrectomy model of chronic cardio-renal disease. While intravascular infusion of 10 6 SCs had no effect, 10 6 CMCs reduced renal fibrosis compared to saline in the glomeruli (glomerulosclerosis index: 0.8±0.1 v 1.9±0.2 arbitrary units) and the tubulointersitium (% area type IV collagen: 1.2±0.3 v 8.4±2.0, p<0.05 for both). Similarly, 10 6 CMCs reduced cardiac fibrosis compared to saline (% area stained with picrosirius red: 3.2±0.3 v 5.1±0.4, p<0.05), whereas 10 6 SCs had no effect. Structural changes induced by CMC therapy were accompanied by improved function, as reflected by reductions in plasma creatinine (58±3 v 81±11 µmol/L), urinary protein excretion (9×/÷1 v 64×/÷1 mg/day), and diastolic cardiac stiffness (left ventricular end-diastolic pressure-volume relationship: 0.030±0.003 v 0.058±0.011 mm Hg/µL, p<0.05 for all). Despite substantial improvements in structure and function, only rare CMCs were present in the kidney and heart, whereas abundant CMCs were detected in the liver and spleen.

Together, these findings provide the first evidence suggesting that CMCs, but not SCs, exert a protective action in cardio-renal disease and that these effects may be mediated by the secretion of diffusible anti-fibrotic factor(s).

Thomas Wynn (2007)
Fibroproliferative diseases, including the pulmonary fibroses, systemic sclerosis, liver cirrhosis, cardiovascular disease, progressive kidney disease, and macular degeneration, are a leading cause of morbidity and mortality and can affect all tissues and organ systems. Fibrotic tissue remodeling can also influence cancer metastasis and accelerate chronic graft rejection in transplant recipients. Nevertheless, despite its enormous impact on human health, there are currently no approved treatments that directly target the mechanism(s) of fibrosis. The primary goals of this Review series on fibrotic diseases are to discuss some of the major fibroproliferative diseases and to identify the common and unique mechanisms of fibrogenesis that might be exploited in the development of effective antifibrotic therapies.

Therapeutic angiogenesis for patients with limb ischaemia by autologous transplantation of bone-marrow cells: a pilot study and a randomised controlled trial.

Publisher ID: 09-PONE-RA-15102R1
DOI: 10.1371/journal.pone.0009543
PMC ID: 2832011
PubMed ID: 20209052
Copyright statement: Yuen et al. This is an open-access article distributed under the terms of the Creative Commons Attribution License, which permits unrestricted use, distribution, and reproduction in any medium, provided the original author and source are credited.