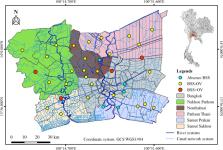 The liver fluke Opisthorchis viverrini s.l. is associated with a long-term public health problem in Thailand. However, O. viverrini s.l. infection in Bithynia snails in the canal network system (CNS) in the Bangkok Metropolitan Region (BMR) has never been assessed. This study aimed to investigate the occurrence of B. siamensis siamensis and the prevalence of O. viverrini s.l. infection in this snail in the CNS in BMR along with morphological examination and molecular analyses on O. viverrini s.l. cercariae. The snails were randomly sampled from the CNS in all BMR areas from January 2018 to July 2019. Snail specimens were identified and examined for digenean infection by shedding and dissection. The cercariae were identified using morphology and molecular methods, including PCR with a species-specific primer and a Bayesian phylogenetic analysis of ITS2 sequences. Bithynia siamensis siamensis was found in almost all sampling localities, with different quantities and detected frequencies. From a total of 7473 B. s. siamensis specimens, O. viverrini s.l. infections were detected in the Northern Bangkok, Muang Nakhon Pathom, Krathum Baen, and Lam Luk Ka areas with an overall prevalence of 0.05% (4/7473) and prevalence of 0.22% (1/455), 0.21% (1/469), 0.40% (1/253), and 0.16% (1/614) in individual localities with positive snails, respectively. This study is the first investigation of digenean infection in the canal network system-type habitat in Thailand and revealed extremely low O. viverrini s.l. prevalence.

How plasticity, genetic assimilation and cryptic genetic variation may contribute to adaptive radiations.

Ralf F Schneider,  Axel Meyer (2017)
There is increasing evidence that phenotypic plasticity can promote population divergence by facilitating phenotypic diversification and, eventually, genetic divergence. When a 'plastic' population colonizes a new habitat, it has the possibility to occupy multiple niches by expressing several distinct phenotypes. These initially reflect the population's plastic range but may later become genetically fixed by selection via the process of 'genetic assimilation' (GA). Through this process multiple specialized sister lineages can arise that share a common plastic ancestor - the 'flexible stem'. Here, we review possible molecular mechanisms through which natural selection could fix an initially plastic trait during GA. These mechanisms could also explain how GA may contribute to cryptic genetic variation that can subsequently be coopted into other phenotypes or traits, but also lead to nonadaptive responses. We outline the predicted patterns of genetic and transcriptional divergence accompanying flexible stem radiations. The analysis of such patterns of (retained) adaptive and nonadaptive plastic responses within and across radiating lineages can inform on the state of ongoing GA. We conclude that, depending on the stability of the environment, the molecular architecture underlying plastic traits can facilitate diversification, followed by fixation and consolidation of an adaptive phenotype and degeneration of nonadaptive ones. Additionally, the process of GA may increase the cryptic genetic variation of populations, which on one hand may serve as substrate for evolution, but on another may be responsible for nonadaptive responses that consolidate local allopatry and thus reproductive isolation.

Taxonomy and biology of liver flukes.

Sasithorn Kaewkes (2003)
Opisthorchis viverrini is a human liver fluke endemic in Thailand, Lao PDR and Cambodia. Three subspecies of Bithynia siamensis and 18 species of cyprinoid fish are susceptible first and second intermediate hosts, respectively. The differentiation between the adult worm of O. viverrini and that of the closely related species, Opisthorchis felineus and Clonorchis sinensis, is mainly based on the shape and position of the testes and the arrangement of the vitellaria. Eggs of these flukes are morphologically similar and problematic in identification. However, the differentiation between opisthorchid and lecithodendrid eggs is possible. Morphology and biology of each stage are comparatively reviewed. Biological aspects of snail and fish hosts are also included.

The non-marine aquatic mollusca of Thailand