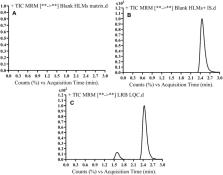 Larotrectinib (VITRAKVI) is an orally potent tropomyosin receptor kinase (Trk) inhibitor that acts by competitive inhibition of all corresponding receptor kinases. It demonstrated a marked response rate (75%) and robust anticancer activity in Trk fusion-positive patients. This response is independent of cancer type, age and gender.

In this study, an efficient and accurate LC-MS/MS analytical method was developed for Larotrectinib (LRB) quantification in addition to evaluation of its metabolic stability. LRB and lapatinib (LTP) (which is chosen as an internal standard; IS) were eluted utilizing an isocratic mobile phase with a reversed phase elution system (C 18 column).

The linearity range of the established method was 5–500 ng/mL ( r 2 ≥ 0.9999) in the human liver microsomes (HLMs) matrix. Various parameters were calculated to validate the method sensitivity (limit of quantification was 5 ng/mL) and reproducibility (inter and intra-day accuracy and precision were below 3% in all samples) of our methodology. For evaluation of LRB metabolic stability in HLMs matrix, in vitro half-life (48.8 min) and intrinsic clearance (14.19 µL/min/mg) were computed.

Accordingly, we can conclude that LRB is a moderate extraction ratio drug when compared with other tyrosine kinase inhibitors (TKIs). According to our knowledge, the discussed procedure in this study is the first LC-MS/MS analytical method for evaluating LRB metabolic stability.

Alessio Amatu,  Andrea Sartore-Bianchi,  Salvatore Siena (2016)
The tropomyosin receptor kinase (Trk) receptor family comprises 3 transmembrane proteins referred to as Trk A, B and C (TrkA, TrkB and TrkC) receptors that are encoded by the NTRK1, NTRK2 and NTRK3 genes, respectively. These receptor tyrosine kinases are expressed in human neuronal tissue and play an essential role in the physiology of development and function of the nervous system through activation by neurotrophins. Gene fusions involving NTRK genes lead to transcription of chimeric Trk proteins with constitutively activated or overexpressed kinase function conferring oncogenic potential. These genetic abnormalities have recently emerged as targets for cancer therapy, because novel compounds have been developed that are selective inhibitors of the constitutively active rearranged proteins. Developments in this field are being aided by next generation sequencing methods as tools for unbiased gene fusions discovery. In this article, we review the role of NTRK gene fusions across several tumour histologies, and the promises and challenges of targeting such genetic alterations for cancer therapy.

An Oncogenic NTRK Fusion in a Patient with Soft-Tissue Sarcoma with Response to the Tropomyosin-Related Kinase Inhibitor LOXO-101.

Robert Doebele,  Lara Davis,  Aria Vaishnavi … (2015)
Oncogenic TRK fusions induce cancer cell proliferation and engage critical cancer-related downstream signaling pathways. These TRK fusions occur rarely, but in a diverse spectrum of tumor histologies. LOXO-101 is an orally administered inhibitor of the TRK kinase and is highly selective only for the TRK family of receptors. Preclinical models of LOXO-101 using TRK-fusion-bearing human-derived cancer cell lines demonstrate inhibition of the fusion oncoprotein and cellular proliferation in vitro, and tumor growth in vivo. The tumor of a 41-year-old woman with soft-tissue sarcoma metastatic to the lung was found to harbor an LMNA-NTRK1 gene fusion encoding a functional LMNA-TRKA fusion oncoprotein as determined by an in situ proximity ligation assay. In a phase I study of LOXO-101 (ClinicalTrials.gov no. NCT02122913), this patient's tumors underwent rapid and substantial tumor regression, with an accompanying improvement in pulmonary dyspnea, oxygen saturation, and plasma tumor markers.

The prediction of human pharmacokinetic parameters from preclinical and in vitro metabolism data.

B Michael Silber,  P Wastall,  Sarah Liston … (1997)
We describe a comprehensive retrospective analysis in which the abilities of several methods by which human pharmacokinetic parameters are predicted from preclinical pharmacokinetic data and/or in vitro metabolism data were assessed. The prediction methods examined included both methods from the scientific literature as well as some described in this report for the first time. Four methods were examined for their ability to predict human volume of distribution. Three were highly predictive, yielding, on average, predictions that were within 60% to 90% of actual values. Twelve methods were assessed for their utility in predicting clearance. The most successful allometric scaling method yielded clearance predictions that were, on average, within 80% of actual values. The best methods in which in vitro metabolism data from human liver microsomes were scaled to in vivo clearance values yielded predicted clearance values that were, on average, within 70% to 80% of actual values. Human t1/2 was predicted by combining predictions of human volume of distribution and clearance. The best t1/2 prediction methods successfully assigned compounds to appropriate dosing regimen categories (e.g., once daily, twice daily and so forth) 70% to 80% of the time. In addition, correlations between human t1/2 and t1/2 values from preclinical species were also generally successful (72-87%) when used to predict human dosing regimens. In summary, this retrospective analysis has identified several approaches by which human pharmacokinetic data can be predicted from preclinical data. Such approaches should find utility in the drug discovery and development processes in the identification and selection of compounds that will possess appropriate pharmacokinetic characteristics in humans for progression to clinical trials.