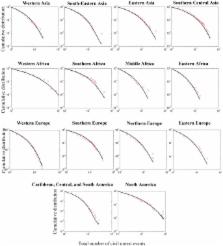 Civil unrest is a powerful form of collective human dynamics, which has led to major transitions of societies in modern history. The study of collective human dynamics, including collective aggression, has been the focus of much discussion in the context of modeling and identification of universal patterns of behavior. In contrast, the possibility that civil unrest activities, across countries and over long time periods, are governed by universal mechanisms has not been explored. Here, records of civil unrest of 170 countries during the period 1919–2008 are analyzed. It is demonstrated that the distributions of the number of unrest events per year are robustly reproduced by a nonlinear, spatially extended dynamical model, which reflects the spread of civil disorder between geographic regions connected through social and communication networks. The results also expose the similarity between global social instability and the dynamics of natural hazards and epidemics.

The causality analysis of climate change and large-scale human crisis.

D. Zhang,  H F Lee,  C. Wang … (2011)
Recent studies have shown strong temporal correlations between past climate changes and societal crises. However, the specific causal mechanisms underlying this relation have not been addressed. We explored quantitative responses of 14 fine-grained agro-ecological, socioeconomic, and demographic variables to climate fluctuations from A.D. 1500-1800 in Europe. Results show that cooling from A.D. 1560-1660 caused successive agro-ecological, socioeconomic, and demographic catastrophes, leading to the General Crisis of the Seventeenth Century. We identified a set of causal linkages between climate change and human crisis. Using temperature data and climate-driven economic variables, we simulated the alternation of defined "golden" and "dark" ages in Europe and the Northern Hemisphere during the past millennium. Our findings indicate that climate change was the ultimate cause, and climate-driven economic downturn was the direct cause, of large-scale human crises in preindustrial Europe and the Northern Hemisphere.

Juan Bohorquez,  Sean Gourley,  Alexander Dixon … (2009)
Many collective human activities, including violence, have been shown to exhibit universal patterns. The size distributions of casualties both in whole wars from 1816 to 1980 and terrorist attacks have separately been shown to follow approximate power-law distributions. However, the possibility of universal patterns ranging across wars in the size distribution or timing of within-conflict events has barely been explored. Here we show that the sizes and timing of violent events within different insurgent conflicts exhibit remarkable similarities. We propose a unified model of human insurgency that reproduces these commonalities, and explains conflict-specific variations quantitatively in terms of underlying rules of engagement. Our model treats each insurgent population as an ecology of dynamically evolving, self-organized groups following common decision-making processes. Our model is consistent with several recent hypotheses about modern insurgency, is robust to many generalizations, and establishes a quantitative connection between human insurgency, global terrorism and ecology. Its similarity to financial market models provides a surprising link between violent and non-violent forms of human behaviour.

Competing Interests: The author has declared that no competing interests exist.

The author has no support or funding to report.