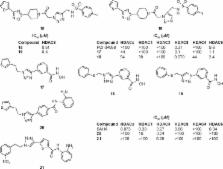 The copper(I)-catalyzed 1,3-dipolar cycloaddition between alkynes and azides (click chemistry) to form 1,2,3-triazoles is the most popular reaction due to its reliability, specificity, and biocompatibility. This reaction has the potential to shorten procedures, and render more efficient lead identification and optimization procedures in medicinal chemistry, which is a powerful modular synthetic approach toward the assembly of new molecular entities and has been applied in anticancer drugs discovery increasingly. The present review focuses mainly on the applications of this reaction in the field of synthesis of agents with anticancer activity, which are divided into four groups: topoisomerase II inhibitors, histone deacetylase inhibitors, protein tyrosine kinase inhibitors, and antimicrotubule agents.

Jon Hunter,  P Blume (2001)
Protein-tyrosine kinases (PTKs) are important regulators of intracellular signal-transduction pathways mediating development and multicellular communication in metazoans. Their activity is normally tightly controlled and regulated. Perturbation of PTK signalling by mutations and other genetic alterations results in deregulated kinase activity and malignant transformation. The lipid kinase phosphoinositide 3-OH kinase (PI(3)K) and some of its downstream targets, such as the protein-serine/threonine kinases Akt and p70 S6 kinase (p70S6K), are crucial effectors in oncogenic PTK signalling. This review emphasizes how oncogenic conversion of protein kinases results from perturbation of the normal autoinhibitory constraints on kinase activity and provides an update on our knowledge about the role of deregulated PI(3)K/Akt and mammalian target of rapamycin/p70S6K signalling in human malignancies.

Gary Gallick,  J Summy (2003)
The Src family of non-receptor protein tyrosine kinases plays critical roles in a variety of cellular signal transduction pathways, regulating such diverse processes as cell division, motility, adhesion, angiogenesis, and survival. Constitutively activated variants of Src family kinases, including the viral oncoproteins v-Src and v-Yes, are capable of inducing malignant transformation of a variety of cell types. Src family kinases, most notably although not exclusively c-Src, are frequently overexpressed and/or aberrantly activated in a variety of epithelial and non-epithelial cancers. Activation is very common in colorectal and breast cancers, and somewhat less frequent in melanomas, ovarian cancer, gastric cancer, head and neck cancers, pancreatic cancer, lung cancer, brain cancers, and blood cancers. Further, the extent of increased Src family activity often correlates with malignant potential and patient survival. Activation of Src family kinases in human cancers may occur through a variety of mechanisms and is frequently a critical event in tumor progression. Exactly how Src family kinases contribute to individual tumors remains to be defined completely, however they appear to be important for multiple aspects of tumor progression, including proliferation, disruption of cell/cell contacts, migration, invasiveness, resistance to apoptosis, and angiogenesis. This review details the evidence for Src family activation in human tumors, and emphasizes possible consequences to tumor progression. Given the ability of Src and its family members to participate in so many aspects of tumor progression and metastasis, Src family kinases are attractive targets for future anti-cancer therapeutics.