Infection Rates and Risk Factors for Infection Among Health Workers During Ebola and Marburg Virus Outbreaks: A Systematic Review 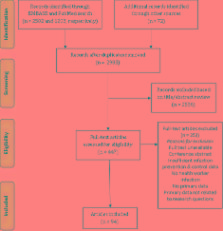 Journal: The Journal of Infectious Diseases

Infection in health workers (HWs) has characterized outbreaks of Ebola virus disease (EVD) and Marburg virus disease (MVD). We conducted a systematic review to investigate infection and mortality rates and common exposure risks in HWs in EVD and MVD outbreaks.

We searched the EMBASE and PubMed databases to identify articles posted before 27 December 2017, with no language restrictions. Data on the number, frequency, and mortality of HW infection and exposure risks were extracted.

Ninety-four articles related to 22 outbreaks were included. HW infections composed 2%–100% of cases in EVD and 5%–50% of cases in MVD outbreaks. Among exposed HWs, 0.6%–92% developed EVD, and 1%–10% developed MVD. HW infection rates were consistent through outbreaks. The most common exposure risk situations were inadequate personal protective equipment and exposure to patients with unrecognized EVD/MVD. Similar risks were reported in past EVD/MVD outbreaks and in the recent outbreak in West Africa.

Many outbreaks reported high proportions of infected HWs. Similar HW infection rates and exposure risk factors in both past and recent EVD and MVD outbreaks emphasize the need to improve the implementation of appropriate infection control measures consistently across all healthcare settings.

D. Heymann,  Peter Kilmarx,  Stuart T. Nichol … (1999)
In May 1995, an international team characterized and contained an outbreak of Ebola hemorrhagic fever (EHF) in Kikwit, Democratic Republic of the Congo. Active surveillance was instituted using several methods, including house-to-house search, review of hospital and dispensary logs, interview of health care personnel, retrospective contact tracing, and direct follow-up of suspect cases. In the field, a clinical case was defined as fever and hemorrhagic signs, fever plus contact with a case-patient, or fever plus at least 3 of 10 symptoms. A total of 315 cases of EHF, with an 81% case fatality, were identified, excluding 10 clinical cases with negative laboratory results. The earliest documented case-patient had onset on 6 January, and the last case-patient died on 16 July. Eighty cases (25%) occurred among health care workers. Two individuals may have been the source of infection for >50 cases. The outbreak was terminated by the initiation of barrier-nursing techniques, health education efforts, and rapid identification of cases.

DIH Simpson,  IM Deng (1977)
A large outbreak of haemorrhagic fever (subsequently named Ebola haemorrhagic fever) occurred in southern Sudan between June and November 1976. There was a total of 284 cases; 67 in the source town of Nzara, 213 in Maridi, 3 in Tembura, and 1 in Juba. The outbreak in Nzara appears to have originated in the workers of a cotton factory. The disease in Maridi was amplified by transmission in a large, active hospital. Transmission of the disease required close contact with an acute case and was usually associated with the act of nursing a patient. The incubation period was between 7 and 14 days. Although the link was not well established, it appears that Nzara could have been the source of infection for a similar outbreak in the Bumba Zone of Zaire.In this outbreak Ebola haemorrhagic fever was a unique clinical disease with a high mortality rate (53% overall) and a prolonged recovery period in those who survived. Beginning with an influenza-like syndrome, including fever, headache, and joint and muscle pains, the disease soon caused diarrhoea (81%), vomiting (59%), chest pain (83%), pain and dryness of the throat (63%), and rash (52%). Haemorrhagic manifestations were common (71%), being present in half of the recovered cases and in almost all the fatal cases.Two post mortems were carried out on patients in November 1976. The histopathological findings resembled those of an acute viral infection and although the features were characteristic they were not exclusively diagnostic. They closely resembled the features described in Marburg virus infection, with focal eosinophilic necrosis in the liver and destruction of lymphocytes and their replacement by plasma cells. One case had evidence of renal tubular necrosis.Two strains of Ebola virus were isolated from acute phase sera collected from acutely ill patients in Maridi hospital during the investigation in November 1976. Antibodies to Ebola virus were detected by immunofluorescence in 42 of 48 patients in Maridi who had been diagnosed clinically, but in only 6 of 31 patients in Nzara. The possibility of the indirect immunofluorescent test not being sufficiently sensitive is discussed.Of Maridi case contacts, in hospital and in the local community, 19% had antibodies. Very few of them gave any history of illness, indicating that Ebola virus can cause mild or even subclinical infections. Of the cloth room workers in the Nzara cotton factory, 37% appeared to have been infected, suggesting that the factory may have been the prime source of infection.

Mpia A. Bwaka,  Marie‐José Bonnet,  Philippe Calain … (1999)
During the 1995 outbreak of Ebola hemorrhagic fever in the Democratic Republic of the Congo, a series of 103 cases (one-third of the total number of cases) had clinical symptoms and signs accurately recorded by medical workers, mainly in the setting of the urban hospital in Kikwit. Clinical diagnosis was confirmed retrospectively in cases for which serum samples were available (n = 63, 61% of the cases). The disease began unspecifically with fever, asthenia, diarrhea, headaches, myalgia, arthralgia, vomiting, and abdominal pain. Early inconsistent signs and symptoms included conjunctival injection, sore throat, and rash. Overall, bleeding signs were observed in <45% of the cases. Typically, terminally ill patients presented with obtundation, anuria, shock, tachypnea, and normothermia. Late manifestations, most frequently arthralgia and ocular diseases, occurred in convalescent patients. This series is the most extensive number of cases of Ebola hemorrhagic fever observed during an outbreak.

This is an Open Access article distributed under the terms of the Creative Commons Attribution 3.0 IGO (CC BY 3.0 IGO) License ( https://creativecommons.org/licenses/by/3.0/igo/) which permits unrestricted reuse, distribution, and reproduction in any medium, provided the original work is properly cited.