Rolipram, a Selective Phosphodiesterase 4 Inhibitor, Ameliorates Mechanical Hyperalgesia in a Rat Model of Chemotherapy-Induced Neuropathic Pain through Inhibition of Inflammatory Cytokines in the Dorsal Root Ganglion 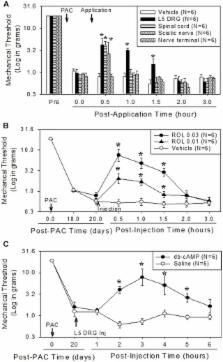 Quantitative assessment of tactile allodynia in the rat paw

Miles D. Houslay,  D. Adams (2003)
cAMP is a second messenger that controls many key cellular functions. The only way to inactivate cAMP is to degrade it through the action of cAMP phosphodiesterases (PDEs). PDEs are thus poised to play a key regulatory role. PDE4 cAMP-specific phosphodiesterases appear to have specific functions with selective inhibitors serving as potent anti-inflammatory agents. The recent elucidation of the structure of the PDE4 catalytic unit allows for molecular insight into the mode of catalysis as well as substrate and inhibitor selectivity. The four PDE4 genes encode over 16 isoforms, each of which is characterized by a unique N-terminal region. PDE4 isoforms play a pivotal role in controlling functionally and spatially distinct pools of cAMP by virtue of their unique intracellular targeting. Targeting occurs by association with proteins, such as arrestins, SRC family tyrosyl kinases, A-kinase anchoring proteins ('AKAPs') and receptor for activated C kinase 1 ('RACK1'), and, in the case of isoform PDE4A1, by a specific interaction (TAPAS-1) with phosphatidic acid. PDE4 isoforms are 'designed' to be regulated by extracellular-signal-related protein kinase (ERK), which binds to anchor sites on the PDE4 catalytic domain that it phosphorylates. The upstream conserved region 1 (UCR1) and 2 (UCR2) modules that abut the PDE4 catalytic unit confer regulatory functions by orchestrating the functional outcome of phosphorylation by cAMP-dependent protein kinase ('PKA') and ERK. PDE4 enzymes stand at a crossroads that allows them to integrate various signalling pathways with that of cAMP in spatially distinct compartments.