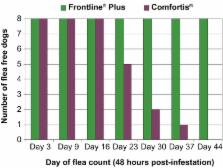 In the study reported here, the pioneer fipronil/(S)-methoprene topical product (FRONTLINE ® PLUS, Merial Limited, Duluth, GA) was compared to the oral spinosad product (COMFORTIS ® Elanco, Greenfield, IN) for efficacy against adult fleas and preventing egg production. The product presentations, doses and labelling were the one applicable in the USA. Using a standard protocol, 200 cat fleas of mixed sex were applied to dogs on Days 1, 7, 14, 21, 28, 35, and 42. Dogs were combed to remove fleas 24 hours post-infestation, the fleas were counted, collected, and then reapplied to each dog following completion of their respective count. At 48 hours post-infestation, comb counts were performed and fleas were removed. No fleas were collected from any dog in the fipronil/(S)-methoprene group at any 24 or 48 hours post-infestation assessment throughout the six weeks study, yielding a preventive efficacy of 100%. For the spinosad treatment, efficacy was 100% at 24 hours and 48 hours through Day 16, and thereafter declined. The results observed in the spinosad-treated dogs were highly variable between animals. At the 24 and 48 hours counts following the Day 21 infestation, only five of eight spinosad-treated dogs (62.5%) were flea-free. Following the Day 28 infestation, spinosad efficacy fell to 85% and 89%, for the 24 hours and 48 hours counts, and only two dogs (25%) were flea free, compared to 100% flea-free dogs in the fipronil/(S)-methoprene group. No fleas were collected from the fipronil/(S)- methoprene treated dogs throughout the entire study, therefore, no eggs were collected at any time from any dog in the group. However, in the spinosad group adult fleas were found on dogs starting on Day 21 and by Day 30, 42 eggs were collected from one dog that had 107 adult fleas counted at 48 hours. At Day 37 and Day 49, more than 100 eggs were collected from each dog in the spinosad-treated and control groups.

The spinosyn family of insecticides: realizing the potential of natural products research.

Herbert Kirst (2010)
The spinosyns are a large family of unprecedented compounds produced from fermentation of two species of Saccharopolyspora. Their core structure is a polyketide-derived tetracyclic macrolide appended with two saccharides. They show potent insecticidal activities against many commercially significant species that cause extensive damage to crops and other plants. They also show activity against important external parasites of livestock, companion animals and humans. Spinosad is a defined combination of the two principal fermentation factors, spinosyns A and D. Structure-activity relationships (SARs) have been extensively studied, leading to development of a semisynthetic second-generation derivative, spinetoram. The spinosyns have a unique mechanism of action (MOA) involving disruption of nicotinic acetylcholine receptors. When compared with many other insecticides, the spinosyns generally show greater selectivity toward target insects and lesser activity against many beneficial predators as well as mammals and other aquatic and avian animals. Their insecticidal spectrum, unique MOA and lower environmental effect make them useful new agents for modern integrated pest management programs. As a result, this work has received U S Presidential Green Chemistry Challenge Awards.

Flea and tick control in the 21st century: challenges and opportunities.

Michael Dryden (2009)
Historically, veterinarians have told their clients that one flea is all that is necessary to produce and maintain the clinical signs of flea allergy dermatitis (FAD). Newer adulticides, such as fipronil, imidacloprid, nitenpyram and selamectin, have had a positive clinical effect on dogs and cats with FAD. However, data on flea feeding and the effect of these products on flea feeding bring into question the once perceived dogma of the single flea bite concept. Current data would indicate that the primary role of these insecticides in managing FAD is in rapidly reducing flea numbers and reducing flea feeding rather than preventing flea bites. Controlling tick infestations is important not only because ticks are nuisance parasites of dogs and cats, but also because they are vectors of a variety of bacterial and protozoal diseases. Achieving satisfactory tick control is often difficult due to unrealistic expectations of pet owners, to residual acaricidal properties of products that are often less than 100% and because of constant re-infestation pressure. Some of the most important factors veterinarians must be aware of are regional changes in tick distributions, our inability to control wildlife tick hosts and expectation differences between flea and tick control. These factors probably cause most real and perceived product failures.

Prevalence of flea infestation in dogs and cats in Hungary combined with a survey of owner awareness.

F. BEUGNET,  N Solymosi,  R. FARKAS … (2009)
A survey was conducted in order to gain current information on flea species (Siphonaptera: Pulicidae) infesting dogs and cats living in urban and rural areas of Hungary, along with data on the factors that affect the presence, distribution and seasonality of infestation. In addition, owner awareness of flea infestation was evaluated. Practitioners in 13 veterinary clinics were asked to examine all dogs and cats attending the clinic and to collect fleas, when present, on 2 days in each month from December 2005 to November 2006. They also completed a questionnaire for each animal examined. A total of 319 dogs (14.1%) were found to be infested; the highest prevalence (27.1%) of infestation on dogs occurred in August and the lowest (5.4%) in May. Prevalence of fleas on cats was higher (22.9%); the highest (35.0%) and lowest (8.1%) prevalences occurred in July and April, respectively. Fleas were more prevalent in rural (387/1924 animals, 20.2%) than in urban (161/1343 animals, 12.0%) areas. Three species, Ctenocephalides felis (Bouché), Ctenocephalides canis (Curtis) and Pulex irritans L., were found. On dogs, the prevalence of C. canis alone was 53.0%, whereas that of C. felis alone was 36.0%. Only 19 specimens of P. irritans were found on 14 dogs from rural habitats only. Prevalence of C. felis only on cats was 94.3%; the remaining cats were infested with either C. canis or with mixed infestations of C. felis and C. canis. More than half (51.4%) of the owners of infested dogs and cats had not used flea control products in the past year or more, and five times as many owners in rural than urban areas had not used flea control products in the same period. Very few owners reported having attempted to kill fleas in their animals' environment; instead, they believed that fleas were acquired from other cats or dogs.