Oxytocin in metabolic homeostasis: implications for obesity and diabetes management 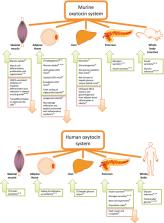 Oxytocin was once understood solely as a neuropeptide with a central role in social bonding, reproduction, parturition, lactation and appetite regulation. Recent evidence indicates that oxytocin enhances glucose uptake and lipid utilization in adipose tissue and skeletal muscle, suggesting that dysfunction of the oxytocin system could underlie the pathogenesis of insulin resistance and dyslipidaemia. Murine studies revealed that deficiencies in oxytocin signalling and oxytocin receptor expression lead to obesity despite normal food intake, motor activity and increased leptin levels. In addition, plasma oxytocin concentration is notably lower in obese individuals with diabetes, which may suggest an involvement of the oxytocin system in the pathogenesis of cardiometabolic disease. More recently, small scale studies demonstrated that intranasal administration of oxytocin was associated with significant weight loss as well as improvements in insulin sensitivity and pancreatic β‐cell responsivity in human subjects. The multi‐pronged effects of oxytocin signalling on improving peripheral insulin sensitivity, pancreatic function and lipid homeostasis strongly suggest a role for this system as a therapeutic target in obesity and diabetes management. The complexity of obesity aetiology and the pathogenesis of obesity‐related metabolic complications underscore the need for a systems approach to better understand the role of oxytocin in metabolic function.

METABOLISM OF ISOLATED FAT CELLS. I. EFFECTS OF HORMONES ON GLUCOSE METABOLISM AND LIPOLYSIS.

Nadine Striepens,  Keith M. Kendrick,  Vanessa Hanking … (2013)
There has been an unprecedented interest in the modulatory effects of intranasal oxytocin on human social cognition and behaviour, however as yet no study has actually demonstrated that this modality of administration increases concentrations of the peptide in the brain as well as blood in humans. Here using combined blood and cerebrospinal fluid (CSF) sampling in subjects receiving either 24 IU of oxytocin (n = 11) or placebo (n = 4) we have shown that oxytocin levels significantly increased in both plasma and CSF. However, whereas oxytocin plasma concentrations peaked at 15 min after intranasal administration and decreased after 75 min, CSF concentrations took up to 75 min to reach a significant level. Moreover, there was no correlation (r = <0.10) between oxytocin plasma and CSF concentrations. Together, these data provide crucial insights into the plasma and CSF kinetics of intranasally administered oxytocin.

Effects of intranasal oxytocin on emotional face processing in women.

Gregor Domes,  Alexander Lischke,  Christoph Berger … (2010)
The neuropeptide oxytocin (OXT) has previously been found to reduce amygdala reactivity to social and emotional stimuli in healthy men. The present study aimed to investigate the effect of intranasally administered OXT on brain activity in response to social emotional stimuli of varying valence in women. In a functional magnetic-resonance imaging study, sixteen women were presented with fearful, angry, happy and neutral facial expressions after a single dose of 24IU OXT or a placebo administration in a within-subject design. Group analysis revealed that the blood-oxygen-level-dependent (BOLD) signal was enhanced in the left amygdala, the fusiform gyrus and the superior temporal gyrus in response to fearful faces and in the inferior frontal gyrus in response to angry and happy faces following OXT treatment. This effect was independent of fixation pattern to specific sections of the facial stimuli as revealed by eye tracking and independent of basal plasma levels of OXT, estradiol, and progesterone. The results are at odds with the previously reported effects found in men. Future studies should include both sexes to determine a possible sexual dimorphism in the neural effects of OXT, considering gonadal steroids and OXT receptor affinity.