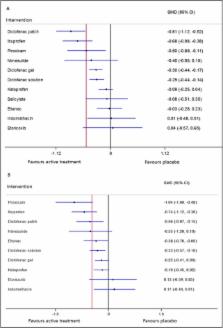 To compare the efficacy and safety of topical non-steroidal anti-inflammatory drugs (NSAIDs), including salicylate, for the treatment of osteoarthritis (OA).

PubMed, Embase, Cochrane Library and Web of Science were searched from 1966 to January 2017. Randomised controlled trials (RCTs) comparing topical NSAIDs with placebo or each other in patients with OA and observational studies comparing topical NSAIDs with no treatment or each other irrespective of disease were included. Two investigators identified studies and independently extracted data. Bayesian network and conventional meta-analyses were conducted. The primary outcomes were pain relief for RCTs and risk of adverse effects (AEs) for observational studies.

Topical NSAIDs were effective and safe for OA. Diclofenac patches may be the most effective topical NSAID for pain relief. No serious gastrointestinal and renal AEs were observed in trials or the general population. However, confirmation of the cardiovascular safety of topical NSAIDs still warrants further observational study.

The results of direct and indirect treatment comparisons in meta-analysis of randomized controlled trials.

Enrique H Bucher,  H Guyatt,  Obi L. Griffith … (1997)
When little or no data directly comparing two treatments are available, investigators often rely on indirect comparisons from studies testing the treatments against a control or placebo. One approach to indirect comparison is to pool findings from the active treatment arms of the original controlled trials. This approach offers no advantage over a comparison of observational study data and is prone to bias. We present an alternative model that evaluates the differences between treatment and placebo in two sets of clinical trials, and preserves the randomization of the originally assigned patient groups. We apply the method to data on sulphamethoxazole-trimethoprim or dapsone/pyrimethamine as prophylaxis against Pneumocystis carinii in HIV infected patients. The indirect comparison showed substantial increased benefit from the former (odds ratio 0.37, 95% CI 0.21 to 0.65), while direct comparisons from randomized trials suggests a much smaller difference (risk ratio 0.64, 95% CI 0.45 to 0.90; p-value for difference of effect = 0.11). Direct comparisons of treatments should be sought. When direct comparisons are unavailable, indirect comparison meta-analysis should evaluate the magnitude of treatment effects across studies, recognizing the limited strength of inference.

EULAR evidence based recommendations for the management of hand osteoarthritis: report of a Task Force of the EULAR Standing Committee for International Clinical Studies Including Therapeutics (ESCISIT).

H J Häuselmann,  Stefan Lohmander,  L. Punzi … (2007)
To develop evidence based recommendations for the management of hand osteoarthritis (OA). The multidisciplinary guideline development group comprised 16 rheumatologists, one physiatrist, one orthopaedic surgeon, two allied health professionals, and one evidence based medicine expert, representing 15 different European countries. Each participant contributed up to 10 propositions describing key clinical points for management of hand OA. Final recommendations were agreed using a Delphi consensus approach. A systematic search of Medline, Embase, CINAHL, Science Citation Index, AMED, Cochrane Library, HTA, and NICE reports was used to identify the best available research evidence to support each proposition. Where possible, the effect size and number needed to treat were calculated for efficacy. Relative risk or odds ratio was estimated for safety, and incremental cost effectiveness ratio was used for cost effectiveness. The strength of recommendation was provided according to research evidence, clinical expertise, and perceived patient preference. Eleven key propositions involving 17 treatment modalities were generated through three Delphi rounds. Treatment topics included general considerations (for example, clinical features, risk factors, comorbidities), non-pharmacological (for example, education plus exercise, local heat, and splint), pharmacological (for example, paracetamol, NSAIDs, NSAIDs plus gastroprotective agents, COX-2 inhibitors, systemic slow acting disease modifying drugs, intra-articular corticosteroids), and surgery. Of 17 treatment modalities, only six were supported by research evidence (education plus exercise, NSAIDs, COX-2 inhibitors, topical NSAIDs, topical capsaicin, and chondroitin sulphate). Others were supported either by evidence extrapolated from studies of OA affecting other joint sites or by expert opinion. Strength of recommendation varied according to level of evidence, benefits and harms/costs of the treatment, and clinical expertise. Eleven key recommendations for treatment of hand OA were developed using a combination of research based evidence and expert consensus. The evidence was evaluated and the strength of recommendation was provided.