Noninvasive imaging of hepatocellular carcinoma: From diagnosis to prognosis 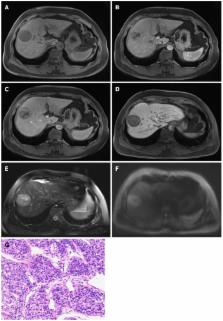 Hepatocellular carcinoma (HCC) is the most common primary liver cancer and a major public health problem worldwide. Hepatocarcinogenesis is a complex multistep process at molecular, cellular, and histologic levels with key alterations that can be revealed by noninvasive imaging modalities. Therefore, imaging techniques play pivotal roles in the detection, characterization, staging, surveillance, and prognosis evaluation of HCC. Currently, ultrasound is the first-line imaging modality for screening and surveillance purposes. While based on conclusive enhancement patterns comprising arterial phase hyperenhancement and portal venous and/or delayed phase wash-out, contrast enhanced dynamic computed tomography and magnetic resonance imaging (MRI) are the diagnostic tools for HCC without requirements for histopathologic confirmation. Functional MRI techniques, including diffusion-weighted imaging, MRI with hepatobiliary contrast agents, perfusion imaging, and magnetic resonance elastography, show promise in providing further important information regarding tumor biological behaviors. In addition, evaluation of tumor imaging characteristics, including nodule size, margin, number, vascular invasion, and growth patterns, allows preoperative prediction of tumor microvascular invasion and patient prognosis. Therefore, the aim of this article is to review the current state-of-the-art and recent advances in the comprehensive noninvasive imaging evaluation of HCC. We also provide the basic key concepts of HCC development and an overview of the current practice guidelines.

JSH Consensus-Based Clinical Practice Guidelines for the Management of Hepatocellular Carcinoma: 2014 Update by the Liver Cancer Study Group of Japan

Masatoshi Kudo,  Osamu Matsui,  Namiki Izumi … (2014)
The Clinical Practice Guidelines for the Management of Hepatocellular Carcinoma proposed by the Japan Society of Hepatology was updated in June 2014 at a consensus meeting of the Liver Cancer Study Group of Japan. Three important items have been updated: the surveillance and diagnostic algorithm, the treatment algorithm, and the definition of transarterial chemoembolization (TACE) failure/refractoriness. The most important update to the diagnostic algorithm is the inclusion of gadolinium-ethoxybenzyl-diethylenetriamine pentaacetic acid-enhanced magnetic resonance imaging as a first line surveillance/diagnostic tool. Another significant update concerns removal of the term “lipiodol” from the definition of TACE failure/refractoriness.

Supported by National Natural Science Foundation of China, No. 81471658; and Science and Technology Support Program of Sichuan Province, No. 2017SZ0003.